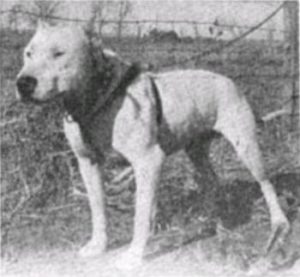 FRISCO SPORT IS PERHAPS THE MOST FAMOUS BATTLE CROSS OF ALL TIME. BEING HALF EDGECOTE LINE BULL TERRIER – THERE IS SOME DEBATE TO THIS AS HIS ANCESTOR CH BANJO WAS BOTH A PIT AND A BENCH DOG – AND HALF COLBY BLOOD, SPORT WAS A FAMOUS DOG IN HIS DAY. HE WAS BRED AND RAISED BY A. E. BETTS AND WAS OFTEN DESCRIBED AS A TYPICAL PIT BULL TERRIER OF IDEAL TYPE – WITH GOOD BONE AND MUSCLE – DESPITE BEING A CROSS. OF COURSE, BACK IN THOSE DAYS, ENGLISH BULL TERRIERS AND PIT BULL TERRIERS WERE CONSIDERED INTERCHANGEABLE IN THE USA AND BOTH WERE SHOWN IN THE PIT AND BENCH. WHICH IS ONE OF THE REASONS IT SIMPLY ISN’T POSSIBLE THAT THE APBT IS THE ORIGINAL BULLDOG. FAR TOO MUCH MIXING OCCURRED…

Sport’s ideal pit weight was said to be 47-50 lbs, though he was shown at 45 pounds as well. However his chainweight fluctuated between 50 and 56 pounds. He was said to have gameness, intelligence, and endurance and a excellent mouth. All in all, he won 10-12 matches and an unspecified amount of rolls. By his eight match he had already amassed $2,000(nearly a year’s salary by today’s standards!) in prize money. Sport also produced $300.00 in stud money at a rate of $25.00 per breeding in 1913. Finding all of the dogs Sport beat is no easy task. The records you will find online range from mostly correct to completely fabricated. I will recount some of this dog’s recorded matches. Sport’s third match was on July 22, 1912 against Houseman’s Clement. Sport was conditioned and handled by a Mr. Casey, while Houseman handled his own dog. The agreed upon weight for both dogs was 50 pounds. However Clement came in at 51.5 pounds pitside and Sport at 45 pounds. Frisco Sport stopped Clement in 47 minutes and this event was attended by some 50 well known dogmen. Some $200 was bet on this match and afterwards A. E. Betts dubbed Sport the best 47-50lb dog of the Pacific Coast. Betts offered to match Sport against two more prominent breeders(whose names he withheld out of respect), one in the east and the other the Midwest. Both dogmen sent letters of refusal in response. Another time, Betts offered to match Sport halfway between the two kennels and later another dog on his own home turf. Betts was willing to travel across the nation to match sport, but no one else dared to accept for some time. Sport’s eighth match was on March 13th 1914 against the soldiers’ dog, a reputed 14xw. In the end the soldiers’ dog was picked up by his owner in order to save the dog’s life. Sport did not come unscathed from his matches. In one of his matches (presumably the last) sport’s leg was broken leaving a lump on his ankle joint. His stifle joint had also thickened from the repeated punishment. Despite this, sport was not lame in any way. But he was certainly not fit to fight. 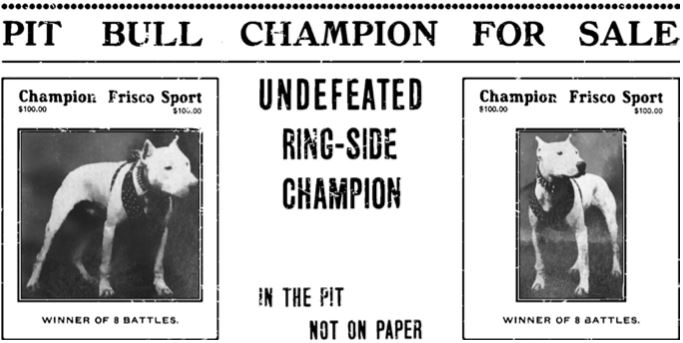 By 3 years (circa 1914) old Frisco Sport had won eight official matches and had produce $2,300.00 in stud and prize money. Due to circumstances and selling his home however, Betts sold Sport for a mere $100.00. He wished him to go to an experienced breeder and A. B. Laws of Cherokee kennels purchased the champion and offered him up for stud. Betts described Laws himself as “on the square”. Sometime later, Dunable purchased Sport. In Dunable’s hands sport won a few more matches. One, in which Sport was slightly crippled, was against the dog of Dr. Sands. No one considered sport fit to fight, but Frisco Sport won in 1:14 and had given two pounds up to Sand’s dog. Sport’s final match was into “Red Nobby”. This was the final of three dogs the McClintock brothers matched into Sport before buying him. It was a intense match. At first Nobby had the better of the fight. However Sport was too much and Nobby quit at :40. A. E. Betts said of Sport; “Regarding Sport, I consider him the greatest dog of all time and in his day could have whipped any 48 to 50 pound dog living. He will take his death, muzzled, any old day, and if he was here no man would get him again. When I shipped him east, he had seen his best pit days.

It would be a shame to fight him again. A third rater will kill him, that couldn’t whip one side of him in his prime-some dog getting an unearned reputation at Sport’s expense. Not old in years, but definitely old in pit work, and you being his owner makes you the possessor of a dog numbered with the best dogs if the past. Don’t ruin his reputation; he is undefeated. No game man would fight him again.” Dunable seemingly grew a great dislike for sport after he exchanged ownership. Challenging him after the champion was crippled and saying he would give up 2 pounds with a much younger dog. Yet in the Dog Fancier of December 1915, page 48, Dunable talked about Sport’s injury and how excellent he was despite said hindrance. Dunable’s challenge against the champion brought him a letter from Jas L. Collins of Witchita, Kansas. Collins called Sport a paper champion and a joke, not wanting any of Sport’s blood in his yard. He claimed Sport was never matched against anything good. The debates heated and soon the dog fancier refused to publish such letters.

Sport produced well, repeatedly siring large litters and throwing game stock. Some of his more notable offspring were Frisco Sue, Rubel’s Ch Dan 11xw, and Frisco sport jr. Frisco Sport remained on the McClintock bros’ yard for the last of his days. They had sold all their bitches except one daughter of Sport. To keep stray dogs away from Sport, the McClintock bros had a high wired fence around their backyard and Sport on a heavy cable. However, on June 2nd, a stray ran up to the fence in an attempt to get at the champion. Sport strained on his cable and managed to grab the stray dog and pull the dog through the fence(bending the wire). Sport had all but killed the dog before the McClintock bros broke up the fight. Frisco Sport only bore a few small scratches from the mix up, but apparently contracted an illness from the stray and died later that day. The final bitch Frisco Sport was bred to was Hobart’s Tess, a pure Henry dog. None of the information written here is a big secret, or even anything that can’t be found with a bit of research. It is unknown how many matches Sport won exactly, but considering he won eight with Betts and perhaps 3-4 with Dunable, that puts him up there in terms of wins. Ten of these matches were reported others were not. Regardless of his record, good dogs are where you find them, and that was certainly the case with Sport.