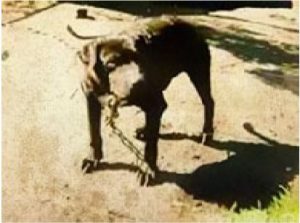 The breeding between Champion Termite R.O.M and Robinson’s Bed Bug’s litter resulted in a litter of four females – Lena, Judy, Mable and Prissy – and one male, born with only one eye…Cyrus. Lena, Judy, and Mable became to be spectacular show dogs. Prissy became a three time winner. However, cloaked in warrior royalty, Cyrus became a legend throughout the dog game, wielding seven conquests during his great career. Cyrus was a strong, athletic dog with a relentless determination. He instinctively became laser focused on his mission to become a Master at what he was meant to do. Cyrus’ first contracted show was into Gaston’s Weasel at 39 lbs., in North Carolina. Though solid, Gaston’s Weasel was not granted enough time to prepare for a meet with the Master, as he was retrieved and delivered to the arena within a 26 minute time frame. Shortly after that show, I received a call from Old Savannah Kennels who claimed to have a rebel, also by the name Cyrus, and we scheduled a contest. I warned them prior to the encounter, that there would only be one King Cyrus, and he was with me. As predicted, the peasant bowed to the King, and we stayed true to our word. Some time later, we relocated from the Carolinas to Georgia where we heard whispers of a fellow in Alabama by the name of Brown, who wished to witness Cyrus’ skills.

We answered  the call, and in just under 30, Cyrus maintained his throne. On his path to Championship, he left his oppositions facing apparent death in the pit. With his newfound Champion status, others begged for the opportunity to remove him from his rightful place. Cyrus was opened to world to any takers, without apprehension, we granted these chances! Our next stop was to Pennsylvania where, again others yearned to beat the Champion with one they believed either matched or could beat Cyrus’ ability. Once again, his opponents were disappointed yet complimentary by stating, “that was the best 40 pound male I ever seen”. Cyrus was carving his path to being Grand Champion with his fourth win. By now, there were four or five other 40 lbs. contenders, each with four triumphs to their names. There was much excitement and anticipation among many wanting to see a match between the two of them. Cyrus’ challengers were Garner’s Simba, Shep, Wrangler, Mickey and Solo’s CH Thunder, who ultimately became the next victim…

Cyrus stepped to his challenger – just as he would have his food bowl – and eliminated the perceived threat in less than 40. As a matter of fact, to ensure that Champion Thunder would not return, and reinforce to everyone that he was now the Grand Champion. It took an additional 10 to get Cyrus off of Thunder. It was as if Cyrus wanted to personally deliver that very message. That was when he was dubbed the nickname “Cyrus The Virus”. Afterwards, we took a break to revel in his success. We waivered a thought of Stan the Man for D.O.Y. ’97, but nobody wanted any parts of The Virus. During the fall of that year, we returned to Alabama, again at the behest of another rival. Cyrus easily shattered his opponent approximately 15, it was like puppy play to him. Next we were summoned to South Florida for a match at Lauderdale Kennels. Cyrus was put into a four week keep for that match. Unlike the Alabama contender, this one required a bit more thrashing and the contest lasted approximately 40 minutes. Nevertheless, he also fell like a toothpick in the wind. Accomplishing the unbelievable task of being a seven-time winner, Cyrus the Virus was known as The Legend!

Cyrus ruled the ring in his days and by now he was about six years old. As with most wise titleholders, the time had come for retirement. He had become a 7-star general – that dominated in five different states – in his world. He had left his mark and now others would have to reach his status. Cyrus dominated the pit with his relentless chest and stifle style. Every opposition that step foot in the box with The Virus, we had to use the breaking stick to get him off of them. Cyrus the Virus was one of the most feared and ducked dog of his era; one the best 40 lbs. dog ever, and also one of the greatest ever to step foot in the pit, doing away with all of his opponents despite of having one eye. People often asked if I thought he was game and up for another battle, and my reply was, “I would have to witness another that would make him prove it!”. Later on, Cyrus was sold to Ride or Die Kennels to peacefully ride the high tides of his last years. In our minds and hearts long lives the King, The Virus, The Legend!