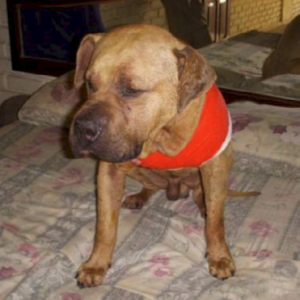 The first time I saw Comino was in Monterrey Mexico. He was brought over by Joyero of Blackrocks Kennels. He was a big buckskin dog with a black mask and was bred by EFram in Texas. Joyero told me and Dtown that the dog was a super hard biting muzzle dog. We thought sure , everyone says their dog is great he’s probably a dud…

A few days later a dog named CH Kimbo, half Red boy half Frisco got loose and headed straight for Comino and it was on. We went for the breaking sticks and when got back comino was body slamming Kimbo from side to side against the ground by the muzzle like an old Tom and Jerry Cartoon. All four legs were in air! Me and Dtown said, “Damn, dude wasn’t kidding” so we hooked him for a convention in Mexico city against Geronimos Travieso 2xw at 50 pounds. We drove 14 Hours to Mexico city with several dogs. Geronimo is one of Mexicos best dogmen of the past and always has a complete dog. Both dogs were face dogs. At the time we were not aware that most of medications we were using were not real and Comino really was not in the best shape he could have been.

The dogs went muzzle to muzzle, face to face for around an hour and a half until finally Travieso runs out of gas. Comino was dragging him around by the muzzle. Travieso was picked up right over the two hour mark. Comino showed a really smart style and great mouth as Traviesos muzzle was completely destroyed! Dtown conditioned Comino for this show. Cominos second show was 6 months later. I got a call for an International Convention in Mexico city and we hooked Comino and Sam Jr. Comino faced a dog named Alma Grande 1xw that had won previously against a dog handled by Chosen Few. Chosen few only handled and it was not their dog. In any event we were hooked again at 50 pounds.

Joero asked me to help with the keep as he had CH Cuko and GrCH Cheyene both hooked for their second so I was happy to help out. This time Comino was put on concrete and worked my jenny and my other equiptment full speed ahead with a different intensity than when Dtown had worked him. He had matured and really put in a super effort during the training and I really felt I had a race car in the red after a great keep ! 14 Hour drive and were back in Mexico city. It was a 16 card show and we are last males to go. At weigh in we come in 49.5 and Alma Grande weighed in at 53.5 pounds! The forfit was half of the bet. Our opponent wanted to fight bad so I told them I wouldn’t take their forfit if they agreed to double the bet. All my friends including my pal from down under think I’ve lost my mind but I knew there was nothing in the world that day that could beat us. Upon release Comino literally beats the opponent wall to wall by the muzzle and at around 17 minutes Alma Grande takes a breather and Comino goes right to the wind pipe and chokes him out. The dog is picked up in 22 minutes. This made Comino a 2xw and my first BIS as a conditioner at an International convention! The next spring Roque from DNK was organizing Morelia, on of the biggest and toughest conventions in the world. Roque told me Club Uruapan wanted to fight my kennel with their CH Sharkys 4xw for a big money. I accepted their challenge. Midway through the keep Joyero called me. 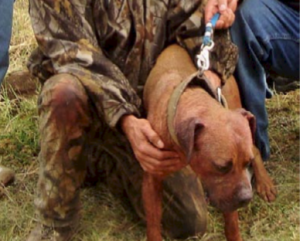 He had some unplanned, uncontrollable circumstances that prevented him from training or even attending the show. He asked if I could help out again with the keep. I was happy to help as I really, really liked the dog! This time Comino trains even harder than the second keep and is really firing on all cylinders. We are informed that Sharky is a Harvey Wallbanger/Chinaman cross that bites extremely hard and has killed all 4 prior opponents. April rolls around and we are 12 hours away from Morelia for the back in black convention. The second I get out of my truck I am bombared by Club Uruapans crew of 20 and they make me aware that they want to play for an unreal amount of money. I say how much and they give me a number that’s astronomica! I say, OK IT’S A BET. They immediately say HOLD ON we will talk about it and get back to you. I thought it was a bluff and they were trying to make me nervous. I did not have a tenth of that money I just wanted to turn the tables and call their bluff and make them nervous. You should have seen the look in their eyes. Both dogs were on weight and it’s a normal bet after all. I had Comino in such good shape, I really thought we were going to steal the show and just blow through Sharky like we blew through Alma Grande in 22 minutes. I could not have been more mistaken. Upon release Sharky drills into my chest, He picks Comino up in the air takes a deep chest hold and slams him into the ground. Between the mouth full of brisket and the body slam, all the air was taken out of my dog! He gets deeper and deeper and deeper into my chest and I start to see black blood leaking. I turn white as a ghost and think to myself what the fuck how can another dog be this freaking strong, what luck I have. This just can not be happening. Sharky digs deeper and deeper into the chest and there is an amount of blood pouring from my chest that has me really concerned. Sharky finally gets out of the chest and gets an entire mouthful right across my muzzle and the 300 Mexicans are cheering like they have just scored a GOAL AT THE WORLD CUP FOR THE CHAMPIONSHIP!

At 15 minutes Sharky is working my muzzle and I see a hole in my chest that you could push a tennis ball through and not touch the sides. I am thinking to myself I am about to get my ass handed to me but I don’t give up on my dog and I cheer him on. My friend says, “Atown, you better do something it don’t look good” and another famous dog man screams the only thing wrong with Sharky is that hes not mine. Its 25 minutes and I’ve yet to take a bite full but Comino finds a way to get the bottom jaw and goes to work shaking like crazy. After a struggle, he really hurts the bottom jaw and then jumps on the ear and Sharky is puching like a madman trying to get back in the chest. This is the fastest match I have seen as Sharky is literally driving Comino to every corner in mere seconds. Comino has his front feet back like an airplane and shows a dazzling display of abilty to stay out of trouble. When Sharky slows a bit, Comino jumps on his muzzle and gets out about half hour of pain and frustration and really starts to hammer Sharkys muzzle. Right at 30 minutes Sharky tries to spin from the bottom and maneuver for position out of the nose hold and Comino pounces to the throat and digs in for dear life, really choking the air out of Sharky and hurting him really bad.

A handle is made and Comino drills Sharky in his corner and comes out with Sharkys top and bottom jaw in his mouth. He was shaking Sharkys four feet of the ground right in front of the Uruapan crew. Black blood mixed with spit slung all over them. I told the handler, “Look, you have got a super dog that can beat a lot of other dogs on any other day, but today your not going to win. You’ve lost the prize but no reason to loose your dog. In my opinion he’s a super dog!” At 42 minutes Sharky was picked up in an effort to save him but he never recovered. 28 dogs were shown that day and I was so proud to get my second BIS as a conditioner with the same dog. Comino was really hurt bad and if not for first class aftercare by vets on hand and me staying in a motel a week just to make sure he was stable, changing gauzes twice a day on a large wound our dog would not have made it. Comino is a real ace! He has a style that’s just hard to beat and he showed to be as game as any I have seen! Comino has been shaped twice again but Super Kennels chumped out and never sent a forfeit and another show in Carribean did not come to fruition either. Now he will be retired to stud. Comino is one of the top 3 males I have had pleasure to see or condition and I will probably base my yard on this dog!