Back in the late nineties my partner & good friend Sami the Arab called me and asked me if I would take his most prized possessions, Boomer, Crazy Legs & Millie up to my yard and use them in my breeding program. These dogs were litter-mates that he kept out of a breeding he did with Nagy’s Christine to Smiths Red. I knew from some of the early breeding’s that Sami did with these dogs that they had the ability to produce good solid bulldogs so I jumped at the chance to start breeding these red boy dogs. At that time Sami and I had already acquired several great dogs from the yard of David Tant so I knew breeding Boomer and his litter-mates to the blood I had already acquired would make explosive results and complete the package.

When I got the dogs to the yard I received a phone call from my partner Sami and he told me to be very careful breeding Boomer because he would tie to a bitch with no problem but when he was ready to pull out he would go crazy! I said “now you tell me this” I asked him if he had the ability to bite under normal conditions and he said no! Sami thought it was the funniest thing but I knew I could handle it. Being that I do not feed, keep or breed man biters and the fact that I had three daughters I had to test Boomer myself. I constantly tested this dog for week straight by feeding him steak, liver, chicken you name it while putting my hands in his bowl and roughing him up and true to Sami’s word all Boomer would do was wag his tail and lick me. I knew at that time this dog wasn’t a man biter he just was a crazy ass red boy dog that had a thing with when he is done breeding he is done!

Taking no chances the first time I bred him I muzzled him and stretched the bitch and chain out tight. Sure as shit after about a 30 min tie Boomer started flailing around like a fish out of water, growling and going nuts 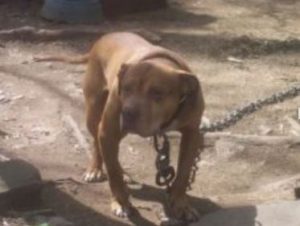 trying to get his dick out of the bitch. Once he came loose, he was fine but I remember thinking man, that is the strangest thing I have ever seen…lmao I started the program with these dogs as soon as I can breeding both Boomer and his brother Crazy Legs to our best brood bitches. Mostly these bitches were bred down from my own stock off Hardcore’s Ch. Mystic as well as the stock we purchased from Tant. Crazy Legs was a small odd looking dogs with bad legs which is how he got the name. He was so damn fight crazy that the only two breeding’s I did with him I had to do via artificial insemination. One was to a direct daughter of School Boys Big Red and the other to my Pepsi bitch. Out of these breeding came two champions. Crazy Legs died of cancer soon after so I concentrated solely on Boomer & Millie From the early breeding I did with Boomer I could see these dogs were something special. As pups they were on fire and showed the typical crazy attitudes red boy dogs were known for but as they matured and we started looking at them closely we could see they also had extreme determination, ability & very hard bites. These dogs were working dogs and boy did they love to work!

I decided I needed to continue the program by inbreeding Boomer back to his sister Millie. I wanted to see how these inbred dogs would turn out. Out of these breeding’s I took only the very best females and bred them back to Boomer. The females that I considered average I only used as out crosses & they turned out to be great producers in their own right. I stayed on this course for several years and thru hard culling, breeding only his best daughters back to him, I eventually started to get red boy dogs like no other we have ever seen. This line of red boy dogs excelled in almost every facet as compared to other lines and I was very pleased with the results we were getting out of all these breeding’s, inbred or out crossed this family was producing dogs of the highest caliber. The early breeding’s that we did with Boomer bred back to his sister Mille produced really solid bulldogs. So much so that I decided to wait to get the one special male from those breeding’s that I could use for breeding as well. That dog turned out to be Boomer Jr. Out of all the males we had from those breeding’s this dog topped them all in every aspect.

After he made the cut and I started to implement him in the breeding program I could see that he too had the ability to produce high caliber dogs! It did not take long for people to notice the quality of this blood. Before long they were in demand all over the country and eventually the demand for them extended overseas as well. As with any line of dogs you get some good and some bad but the good far outweighed the bad. People could not deny that these Boomer dogs were way above the average as far as red boy dogs go and before long they were being referred to as “Boomer” dogs. This I knew was a great honor, when the mantle gets passed down from one famous dog in a gene pool to another dog it speaks volumes on that dogs producing abilities. Boomer made R.O.M. when he was just six years old and produced a total of 7 show champions that we know of and too many show winners to even keep track of.

The old man as I called him had the best chain spot right by the house and he was always treated like a king! He was the one that got the table scraps and the most attention from our family. All of my kids loved Boomer
to death and were always playing with him. In the fall of 2010 Sami the Arab came to the yard for a long overdue visit. My friend Ray took pictures and we are happy we did. At that time Boomer was ten and he was looking it. Sami and I decided it would not be good for the old man to spend another winter on my yard so he took him back to Brooklyn shortly thereafter. He lived a good life for the next two years with the man that bred him eating the best of everything and sleeping on the couch! New year’s day 2012 Boomer passed away sleeping next to the radiator in Sami’s bedroom. It was a proud honor for Sami and I to own such a great stud dog. He was a true living legend and we were truly blessed to have had the opportunity to live with this great animal. I am confident that he will go down as one of the greatest stud dogs to have ever lived! He will always be missed, rest in peace old man and thanks for all the memories.