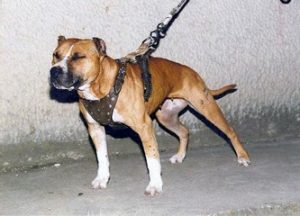 There are so many dogs for sale nowadays, but very few of them are matched. It’s all about money. People want to get rich without any knowledge about the breed. They just care about how many Grand Champions , Champions and Register Of Merit dogs are listed in the pedigree . There are also lots of so -called “fighters ” who would match, but only if they see their opponent first . Only to be sure that they can win . They bet few bucks on the match and do not risk too much. They are not true fighters , they don’t have the heart to match into the best . I am a serious competitor . I was born a fighter, I was a Yugoslavian boxing Champion. I was born for the ring and there I will die . I have the sporting spirit and that’s why I am chasing the fame, not the money. I made so me mistakes and lost so many matches, but this is a sport where you can’t win all of your matches. I don ’t like those people who hide their dogs behind their valuable pedigrees, it is better for them to start to match them, then after they could show to be good ones, then to show their peds and to advertise them. If those people look at the ped of my VETRA, they will probably not like it. Her parents and grandparents weren’t worthy dogs, but I ask them to see what Vetra was able to do in the ring.

I don’t know if I can say anything about VETRA that has not already been said or read. I would like to represent her from a different point of view because she deserves that much. Not just a quick memory as a
fighting machine, but rather as a being which takes and maintains its place in our family. I think that this way would best tell her whole story. Perhaps you will say I am biased, but believe me, you can obtain a precious experience studying the pit dogs.

Living with dogs such as BENDJI (3 hours and 40 minutes), DEVIL or VETRA, I obtained an experience which I would like to share with my children and make them adopt as one of their lifetime principles. However, the readers are undoubtedly more interested in a story based on results, rather than a philosophical approach to the theme. So, here we go. Her first fight had been when she was only 15 months old against Zeljko’s CANDY JR. She was off Dule’s (Crenshaw’s) LITTLE BLACK and was 600 gr (1,3 lbs) over the weight. Although she came with much more experience than young VETRA, she was disarmed by VETRA’s extreme bites and we won in 28 minutes. Her second match was against Ritter Kennels’ MOLLY, from TALE x INKA R.O.M. breeding. MOLLY was a very talented and fast fighter forcing VETRA to work head and neck holds, but after 20 minutes VETRA imposed her style and we won in 50 minutes. MOLLY was not able to make a scratch. In the third match, she routed Brnovic’s TITA from the YELLOW TOM bloodline. VETRA won over TITA again in 28 minutes and became an official Champion. VETRA’s fourth fight was an “off the chain” match against Goran’s MALA, which had a high reputation in her area. She was known as the bitch which had no fighting rival in her neighborhood, even above her weight, VETRA needed only 14 minutes to destroy MALA.

Her fifth match was contracted vs Francuz Kennels’ IRA at 15.2 kg (33.5 lbs). VETRA came ill to that match but she still won after 1 hr and 35 minutes. After that match, I realized what a great bitch I got in my hands. The sixth match was against HERA, a two time winner from Virgo Kennels at 15.8 kg (34.8 lbs). The match was held during NATO bombing strikes all over Serbia and Belgrade. At that time there were lots of electrical blackouts and we used lightbulbs attached to car batteries to get light for the ring. It was a very hard fight between two good opponents, definitely a match to be remembered. VETRA won after 1 hour and l0 minutes.
For her seventh match GR CH VETRA was contracted vs. Novica’s KETTY at 17 kg (37.4 lbs), that was too much for VETRA. Even with that weight difference, KETTY was not able to continue after 34 minutes.
The eight-match was against the dead-game Champion MUNJA. She was 3XW and a 1XL game in 2 hours. Those with heart troubles shouldn’t have watched that one. VETRA literally destroyed Champion MUNJA in only 28 minutes. It was an easy one for VETRA. What to say about this fight? The majority of her rolls were harder than this match. VETRA got out of it without any wounds. The ninth match was scheduled for December 2000 against P&T Kennels’ two time winner NIGERITA, but it was postponed until the next Spring due to complications from a surgical pup delivery.

VETRA had only a few short months for recovery and she met NIGERITA in April 2001. NIGERITA was a white two time winner and had a great reputation for beating top competition. Her second she won over Champion 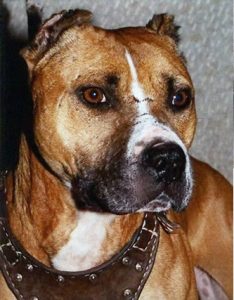 ASTRA, a four time winner, 1 hour and 10 minutes. NIGERITA was predominately from NIGERINO breeding with a touch of old SNOOTY blood. Both bitches had the same style and were even most of the time. VETRA showed that she was not recovered fully from the caesarean section and the owners agreed to a DRAW at 1 hour and 45 minutes. Unfortunately, I lost VETRA! She didn’t make it! All of Grand Champion VETRA’s fights I performed in a sporting manner and with plenty of entertaining spirit, which was not always an accepted and approved thing by the others. My aim through this sport is to make friends, not enemies. In our kennel, which we humorously calling “THE KREM SHOW”, over the many years more than 250 dogs have been hard tested. Those I rejected, for many others would be a good match quality. I lost a couple of good dogs because of the human factor of failure. Either due to my ignorance or because of obeying the advice of more experienced breeders. Grand Champion VETRA 8XW, 1XD was the first official Grand Champion female in Serbia. She lived through NINE contracted matches, never losing one and never showing anything less than greatness. I will always miss her.