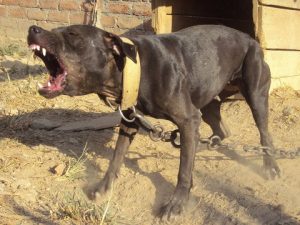 This is the story of a little bulldog with the heart of a lion, a bulldog that never backed down and gave her all. Her name was Artero & GO Team’s Basilea.  Basilea was out of a breeding between the Ecuadorian Legend, G.O.’s Grand Champion Croata and William T Kennels’ AC/DC. obviously I don’t need to go into details about Grand champion Croata, his story is already in the history books. Basilea’s dam, AC/DC was sired by SOUTHERN KENNELS’ CLYDE – a dog double bred on southern kennels’ GRAND CHAMPION MAYDAY R.O.M – and out of SOUTHERN KENNEL’S VODKA – sired by the two time winner HELL ON EARTH’S ZEKE and out of TROWERY’S NITROUS, making her heavily linebred on CHAVIS’ CHAMPION YELLOW JOHN R.O.M.

Basilea was always a pleasure to be around. She never was the noisy or flashy type of bulldog but she was self-confident and well-balanced. A class act and an elite bulldog without a doubt.  Basilea was tested really hard – in fact she was three dogged – and she passed it with flying colors, so it was time to move up to the big league, so she was hooked into SP Kennels from Brazil – for those owners of good dogs such as Champion Matraca. We would have to travel a long way but we had the confidence to accomplish this. Two days before the show I went to pick her up and I realized that Basilea was not in top condition, as a matter of fact she was all dehydrated and underweight due to human errors. All I could do was to administer some IV fluids before the trip. Basilea traveled as cargo so she had to stay in the airport and wait until all the paperwork was completed in order to release her from customs. When we finally got her out she was all skin and bones. We tried to recover her doing everything in our power. Here I have to mention F.L a gentlemen in the sport who supported us in every way possible.

The moment of truth came and my little Basilea came half a pound under and we stepped inside the box. SP Kennels’ dog was in perfect and top condition. They and met in the middle of the with Basi trying her opponent out but she was strong and had a very hard mouth, so she punished Basilea and gave her a bad bleeder in her muzzle. Basilea, always confident of herself was trying to do all in her power to prevail and SP’s dog started to realize that Basi is a real bulldog, “Saco de Hiesos” as she was known there. She did all in her power to overcome all the odds against her and finally won in 1:35 in an impressive manner. The aftercare of Basilea was such an ordeal; all this made a big toll inside her. She stayed with us fighting for her life three weeks after this, but her internal organs could not withstand what she went trough. She is not longer with us and of course she left a big hole in our hearts but will always be remember as a BULLDOG!