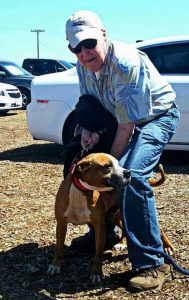 After having heard all that I had about Titere and reading about him, when I finally met him, I had the feeling I was in the presence of greatness. It was a special honor being photo graphed with him. It was like being photo graphed with Man of War or Secretariat. Or Jack Johnson. Shakespeare. Albert Einstein. Yes, he was just that much of a standout! And what was really great was that in addition to all of his accomplishments, he was a good looking, smart dog that was loaded with personality. It made my day just to get to see him and associate with such a fine animal.

I remember one time I took my Hoover dog into the vet’s office. The vet was so taken with the intelligence and good nature of the dog that he couldn’t help extolling on what a fine canine he was. He laid a hand on his head, and he remarked that it was a pleasure to treat such a fine animal. He was thinking about his looks, intelligence, personality, and fine behavior. I couldn’t help feeling proud. I also wondered whether the vet would be impressed or shocked if he knew about Hoover’s other accomplishments. I feel that the vet would be similarly impressed with Titere. Only, Titere’s accomplishments far surpass that of my beloved Hoover. He is most definitely a candidate for the greatest dog of our generation. There is always a little dispute about such things, but it is only a matter of personal opinion and bias. For example, George Armitage gave the top dog in his experience to be the Kager dog that he had owned. But Harry Clark owned both Kager and Billy Sunday, and he considered Billy Sunday the best dog of his time. He was impressed with not only with his athletic
ability, but also with his intelligence. He was so smart that he could figure out any dog’s fighting style and beat it—or even turn it against him! I think the same thing could be said about Titere. Only, I think that fast-lane
dogs today are considerably better than the dogs back in the times of Armitage and Clark.

Titere could be considered a modern day version of Billy Sunday, a candidate for the best of our times. Hi is similarly smart with a like ability to solve any dog’s style. He is nothing short of the full package. He has freaky athletic ability and the intelligence to go with it. And, of course, we shouldn’t neglect that all important quality, gameness. It is really hard to judge a dog unless you know the quality of the competition. Well, Titere beat the Dog of the Year of 2012, so he was subsequently named the Dog of the Year of 2013. Titere’s accomplishments are considerable. A forty-four pound dog, he attained his grand championship in just 13 months, and he did it against top competition. He won his first match over Mac Ten, a two-time winner, in 34 minutes. He won his second over a Mayday dog, a one-time winner, in 24 minutes. Next up was Red Man, a two-time
winner that he defeated in one hour and seven minutes. He disposed of another two-time winner in forty-five minutes.

Just recounting these things doesn’t do the dog justice, as many dog men were highly impressed, and they judged him the best they had seen, and these were guys that had seen some really good dogs. In any case, now a four-time winner himself, he defeated another four-time winner, Champion Omar in 34 minutes, and Omar was judged Gamest in Show. Titere was hooked up to meet Grand Champion Homer Balboa, a six-time winner and Dog of the Year for 2012, but Titere got sick in his keep, and he forfeited the match. But in 2013, the postponed match was on, and Titere defeated Balboa in one hour and fifteen minutes. Consequently,
he was made Dog of the Year for 2013. He defeated a four-time winner, Champion Lotto in 47 minutes, and Lotto was voted Gamest in Show. In fact, so impressive had been Lotto’s gameness against a seemingly unbeatable dog that he was voted Gamest Dog of the Year.

By this time, Titere was seven years old, but he defeated FB Smokey, a young two-time winner, and he did it in two hours and ten minutes. This was a case of a young gun going against an old gun, but Titere managed to overcome the age disadvantage. He was anointed Dog of the Decade by the Sporting Dog Journal. An eight-time winner and now seven years old, this great dog has been retired. Born in Puerto Rico, he was sired by Panthro, a very good dog and a four-time winner over some really good opponents. The breeding came about when SM sent Enana to Puerto Rico and agreed with the breeding. Some neophytes would call Titere “scatter-bred,” but that doesn’t matter when the ancestry is solid, with all good front line proven dogs. He has Frisco, Hunter Red, Garner’s Spike, and Jeep way back in his pedigree, but upfront are all good dogs, too. His being such a good Bulldog was no accident. And SM was able to buy the dog, so he is in his custody now and retired.

Surely it is no vice that we dog people venerate great dogs of over a century ago. Those dogs, such as Colby’s Pincher and Galvin’s Pup, are in the ancestry of all our dogs today, and it gives us pleasure to know that. Titere belongs to history now, and we can only imagine how future generations of dog people will wish that they could have seen him alive and to experience his presence and personality. Future dogs will also be revered, and rightly so, and many of them may be descendants of this great dog.

We can’t know that Titere is the greatest of our generation with certainty, as the world is too vast, and good dogs are numerous—and there are many that others might proclaim as the greatest. But certainly, Titere is a top candidate for the honor of Best Dog in the World. And that’s really saying something. I’m glad I got to meet him and to hold his leash.