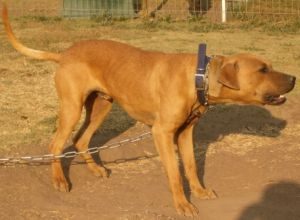 X was born on the 17/10/1904, from DGK’s Champion Dutchess 3xw, 1xl and DGK’s imported male from Tom Garner’s yard called Tudor IMP. This was the only breeding ever done with Champion Dutchess. He was raised on the yard of DGK with his littermates Dee Dee 1xw, Champion Star 3xw and Delta who is a very hard tested game hog.

Before we go on lets look at the back ground of this warrior, he comes from long line of successful competition hogs that has succeeded all over the globe. His dam CH Dutchess comes from one of the most successful litters to date in our little country. Her littermates are the dead game CH Dylan 4xw 1xgl and CH Dolly 4xw 1xgl, there sire being the all time greatest ROM producer in South Africa and also the best producing son of Garners Frisco ROM….. Garner and TTK’s Brute ROM AKA Scar. Their mother is also a ROM female, Garner and DGK’s Babe ROM. He was sent down to the cape of storms to Bolo on the condition that he hooks quietly into Countdown, who at the time was avoiding a match into X ,X’s true breeding had to be hidden due to the fact that Countdown’s crew was not having any interest in meeting the hog who was out of Dutchess & Tudor. It was claimed that he was bred Big Red 1xl x Muffin 1xw, basically cur bred hogs to make them bite. Yet the opposing crew where having none of it as they had yet to beat Bolo, who had a very good record against them. Due to them not being interested Bolo was forced to look else where for some action, it was said that the Countdown crew would only meet X once he got some more wins behind his name. The Countdown crew had settled the show already into an easier opponent who we later learnt was a 1xl looser in 13min but was also a set up so that Countdown could reach his Grand Championship status but that’s another can of worms all
together.

Subsequently after X’s first win in 23min up in the north, 3 months after X was settled in down in the south, finally something was found, he was called ??’s NO NAME, he was off local Yellow breeding and apparently the litter brother to 1xw David who had beaten one that many had thought unbeatable. Weight was set at 23kg’s all things agreed and a date was set. Six weeks and many hours later and it was show time. X took to his keep very well, he proved to be a very, very hard worker and also keen to tackle the task at hand. There where no complications with his keep and his weight was near perfect being off by 200grams but looking like a machine and proved to be a well oiled one at that too. Both hogs on weight and it was time to play. Hogs meet hard in the middle, X going for the front end and No Name hitting the front as well. X moves to his favored face hold and No Name screams, it stays like this for about 9min with X on the face and No Name pushing for a hold. A turn is called on No Name at 10min, but the handlers have to wait for a good
clean handle. First scratch is at 13min with No Name making an unconvincing scratch, handle is then made again and X going hard and true and show goes to back to the way it started. X on the face, No Name driving for a hold. At 25mins a handle is made and No Name stands the line making X a 2xw in 25mins.

After X is healed up and rearing to go which was two weeks later, an appeal is made to the crew of Countdown and with them still running, as the owner of Countdown witnessed what he had done to No Name. After the refusal Bolo told them to find another opponent as they where now claiming to only want to converse with a Champion. During this time that they where looking for X’s next meal, contact was made with X’s original owner to challenge the hog who was bred CH Dutchess x Tudor. Not knowing that they had witnessed first hand the real X. He was then sent back up country thinking that the show was going to take place but alas the bullshit started again from the Countdown crew opting for what they thought would be another easy one. Meeting Jeep and a novice who was 1kg lighter but proved to be Countdown’s hardest showing before he met X. So as it is things turned out X’s pre keep was wasted and he had to be sent back to the Cape of storms looking and waiting for his next challenge which came from Apple Mac’s Junior who’s breeding was never revealed. This proved to X’s longest showing at 2h42 with X not showing his usual face style but show boating and playing around with Junior who never seemed to realize he was getting whipped but did what most do standing the line in the end. Just a side note…… For this challenge X only had a 4 week keep due to traveling problems.

They were washed and weighed, every one happy. X playing around with Junior going along for the ride but doing his usual damage from time to time. This was the first time that Mr. Ruff saw X hit the bottom side of an opponent, stifle, shoulders and legs. Junior eventually stands in 2h42 making X a champion and up to standard for the now GR CH Countdown which didn’t make sense as all the Counts opponents were not near any championship during X’s appeal for a show.

X is now a Champion and Countdown is a Grand Champion and the stage was to be set for a colossal meeting of two of the greatest hogs at their weight in our country but they opted once again for an easier opponent to get him to the same status as his grand father True Blood’s Grand Champion Sir Thomas 7xw POR. His opponent was a 1xw and a 1xl who had quit in his second showing and this was known to all in show scene and if you didn’t know then you must have been a Countdown fan. Countdown is now a 7xw and X is still kept waiting for six months before the great battle that ended in a war. After a few months of negotiations and re-negotiations, as no agreement could be set, it seemed the pressure was too much for Countdown’s crew to handle as it was coming from all sides and avoiding it now would just be running, which ultimately would be bad for his reputation and ego. Everything is finally settled and Champion X enters a grueling and intense 3 month keep, with the help of T & L man as all three had an apple to peel with Counts owner.

The keep goes well up until the last week when an injury to his left shoulder was found 4 days out leaving Bolo stunned as he was in pretty good shape morning before his evening work out when it was discovered. Two days later a substantial amount of animal fat was found in his kennel run, to this day no one knows how it got there or where it came from. We suspect X might have killed a sheep then dragged it into his kennel. Because of the fat, X’s finishing had to be changed due to the extra weight picked up. He was deprived of his full last meal the night before and also had to be worked to get the weight off despite his injury sustained. Finally the much anticipated show night arrives and X is not 100% due to the shoulder injury but because of the good keep he had Bolo and co where confident enough to not pay forfeit as they had been waiting for this day for what seemed forever. Both hogs weighed and washed, Countdown weight 22.95 and X weighing 23.1 being 100gr over the agreed weight. This being a gentlemen sport, forfeit was offered but refused as Counts handler opted to re-hydrate before release and Bolo was to accept any weight increase in the Count as in his own words he had dehydrated Countdown to make weight. With all due respect it was a stupid move from a very experienced hogman, which just proves that he does and will crack under pressure.

During the show many comments where flying around from spectators and those ultimately involved in this great contest between these two great heavy weights. At one stage Bolo who had lost all confidence in X during the first 20mins as he was getting nailed by the more experienced and hard mouthed Grand Champion shouted… “this is a kak hog and if he doesn’t quit he will be sent back to where he came from” not knowing that X had a plan and that there was method in all his madness. He took all Countdown had to give and then some, taming the beast with his famous face holds and trying to stay out of trouble. Many that had witnessed this encounter still say to this day that Champion X is a kak hog because of his style but that suite’s him just fine. Proving that in all this madness gameness can still be king, even after taking a grueling punishment from the hard mouthed grand champion who had taken out both his shoulders in fairly short order. Time goes by so slowly with the scenario playing out exactly the same but with Counts handler continuously asking for a ‘scratch to continue’ and to check fangs to give Countdown a brake. Of course being the man that Bolo is, the scratch to continue was refused but the check for fangs being allowed by a very non biased referee. A moment that stands out in this encounter is during a fang check at 1h47. It was noticed by Bolo and a few others that Count sat between his handlers’ legs with no restraints or intention to proceed as hoped by so many. Shortly after Bolo made it known to everyone in attendance as to what happened, he then handled on the immediate re-request of Countdown’s handler to ‘scratch to continue’, which was accepted by all parties concerned. Countdown’s turn to scratch but he failed to do so sitting the line on his haunches at 1h52mins, making X a 4xw and Countdown a Champion 7xw 1xl.