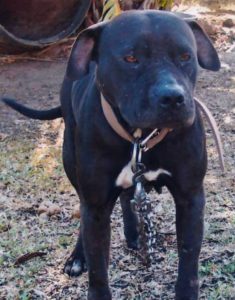 Gook was sold to Mamba. Mamba started Gook at the age of one and shortly after that he was hooked into TTK and their CH TinTin 4XW at 20.5kg
Seadensun did the conditioning and Gook took the keep well in these seasoned hands. Gook & Seadensun won over TTK and their Champion in 1hour58min, no turns. As usual there is a lot of stories, fairy tales and just plain bullshit in our game. It was rumored that CH Tin Tin was dead by the time TTK put him in his crate. The other story is that he died a few months later of billary.

LRK bought Gook from Mamba. Gook broke a cutter in his first and LRK was a bit concerned at what this cutter will do. Gook was rolled a few times and it looked like the broken cutter did not bother him.

Stabilo & TTK had a young prospect that was rumored to kill three dogs in his schooling and he was hot. Gook was blown up to be this unbeatable ace by inexperienced LRK. With the help of Supercharger and Mariner, Stabilo was contacted to hook into 9mm. But agreement could not be met. A lot of rumors and stories spread like wild fire. LRK asked Supercharger again to help him to hook into Stabilo. Agreement was reached and Gook was sent up North to be conditioned by Lefty.

On the night Gook was 200gr overweight and being the Great Dogmen they were, Stabilo & TTK gave LRK 30min to walk the weight off. Gook was weighed again and the match was on. 3hours3minutes and 25 scratches later Gook was declared the winner. 9mm displayed intensity, gameness, ability and intelligence that will not easily be matched. 9mm went on to win 2 more in short order and many forfeits were collected on him.

Gook was now a 2XW and unbeatable in the eyes of LRK. Gook broke another 2 cutters, but LRK kept it too himself. Inexperienced, LRK badly wanted to get in the game and thought Gook will be his ticket. Gook’s weight was put out and for 1 ½ year no one answered the call. LRK put Gook through a 8 week hand walk and bicycle keep and Gook was rolled out into a dog of even weight. He looked and performed like an Ace! On the same day LRK rolled him into a 4kg heavier dog. Gook took some mouth damaged but still looked good.

Two weeks later BHK answered the call and Gook was hooked into their Scar bred dog Bakkies 2XW. LRK decided to do the keep himself. Gook was put through another grueling 8 week keep. 4 Weeks out and LRK acquires a mill and changes to mill work. Suddenly Gook doesn’t want to work, his pads keep on bleeding. But being ignorant and inexperienced, LRK stresses and instead of resting Gook, he adds more work and forces him through the schedules. 10min Hand Walk, 30min Bicycle, 45min Slat, 10min Hand Walk, 45min Slat and 1hour30min Hand Walk.

LRK & Gook travel 540km to the Cape of Storms. At 2hours 18min Gook’s camp picks up and Gook to scratch. He quit and stays in his corner. BHK’s now CH Bakkies makes his courtesy scratch and is declared the winner.