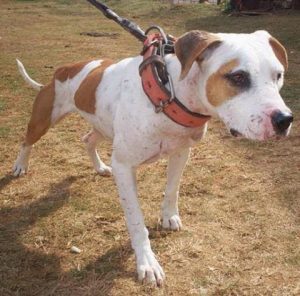 We acquired Jadão’s Katrina 1xW from our friend Jadão, after her first match. Her first one was in Trindade, GO , in our friend Kleber’s house from REBELK’S kennel, where Ch was also done ,thank you for everything, buddy , against the bitch Q Show Duro’s Safira a bitch that hit very hard in the face. As soon as they were put apart ,Safira entered  toughly with her paw  into the face of Katrina, even with those harsh strikes, Katrina was not intimidated and did her game. Around 10 minutes after starting the match, Katrina pushed Safira into the corner of the pit and  managed to hit  her very tough at the rear, and did not let her go. It was when Q Show Hard’s Kennel’s friend asked to take Safira out at the first 15 minutes of match, Safira did not confirmed the scratch of courtesy. Jadão’s Katrina 1xW BIS, Safira 1xL (RIP).

Her second match was in Belém – PA, against Kindo’s Xica Doida , this pedigree is of her sister (Ch Preta). Xica entered with a  very hard paw into Katrina’s throat, but it didn’t take long for Katrina to dominate completely the match , and at the 47-minutes Katrina ended the game, and now is called, Carrasco’s Katrina 2xW 2xBIS, Xica Doida 2xW 1xL 2xBIS (RIP).

Soon after her second match, Malibu 2xW , which is said to be the best of Brazil in 18.5 Kg.We traveled to Brasilia to talk to Winner Kennel’s in his house, because he wouldn’t close any deal by telephone. We fixed the details of the match with a top of R$5,000.00 (five thousand reais) and it was determined that from that moment on, the one who refrained would have to pay the full premium. We had a few days to begin to train Katrina 2xW when we received a call from Winner Kennel’s saying that Malibu had died. We were very sad, because we wanted very much to have that match, so we didn’t think twice and dispensed the top of R$ 5,000.00 (five thousand reais) from Winner Kennel’s.

Regarding the third match, Kindo’s Kennel commented that the Ch Balalaika 4xW 4xBIS , had received the title of “Dog of the Year 2009 “, but there were major difficulties for that match, because Balalaika was 18.1Kg and Katrina 18.5 Kg. Moreover, the competition would have to be performed in Goiania – GO, , the competitor’s home and trained by living legend (lenda viva), Dom Aylon. However, Zé Guilherme and I believe a lot in Katrina, so, we got to start with Ch Balalaika 4xW 4xBIS. She is considered the bitch with the heaviest mouth of Brazil of all time.

We faced many obstacles in Goiânia, impolite comments like , “Is this the little bitch which came to die? “. Dom Aylon made us wait for hours on a highway with Katrina inside the car, when he arrived he said: “What a whity bitch, isn’t she?” and gave an ironic smile. Then we drove more than 100km, and as soon as we pulled out of the car, Aylon again ironic: “Do you want a little time for your bitch?” and laughed … We just rejected, and we weighed and washed the bitches. Katrina was perfect! She could annul Balalaika with a harsh paw into her face. Balalaika shouted and turned back, then Katrina worked hard, on the shoulders, rear and above all, hit her rudely into the belly. Both had done a scratch each, and when Katrina was ready to wrap up once more,  Balalaika could not resist the massacre anymore. She just evacuated and urinated. She was ready to die, then she was pulled to her second scratch, Aylon and the others did not believe. Balalaika stopped at the 32 minutes! Katrina was furious, she wanted to kill one more! Your scratch of courtesy was phenomenal! We burst into joy! Now CHAMPION CARRASCO’S KATRINA 2XBIS (2XRIP), was part of the story of national game-dog.

After the match we received the bets of everybody, less Pancho who had given us game of 4 thousand to 2 thousand, however, he fled before the end of the match, and did not pay us.. For the fourth game, it did not take too long and we were challenged by our friend Ita kennel’s with Neura (a bitch of Gr Ch Luthor bloodline), sister of Medusa 1xW, Pandora 1xW, three bitches from the same litter who were doing good campaign. We closed deal at 18.7kg, for Belém – PA. I could not prepare Katrina, so our friend Jadão  trained her. As Katrina had been trained for the second and third competition by me, we had created bonds of friendship, therefore, it was not difficult to understand that she felt my lack, and it was reflected negatively in her match. As soon as  I let her go, I realized that she was not well. In the previous matches, she always met the enemies before arriving in the midst of the pit, but with Neura was different, Katrina looked tired, slow, and the match had just started, approximately 5 minutes. For sure that competition would be tough, but surpassing all the adversities, Katrina won the game in the 52 minutes, making us even prouder with a scratch of fantastic courtesy as usually ! CH Katrina 4xW 2xBIS (2xRIP)(DOY 2010) and Neura 1xW 1xL!

His grand championship was marked in Belém – PA against a bitch who came from Peru J & J PERU KENNEL TUCA 1XW BIS (littermate sister of Ch Lazara and Lola 1XW) come to make Katrina the next victim, as always Katrina was to break everything showing that it is different and has various resources. Tuca began pounding up and playing very well but Katrina, it would stop the game face and hit the scratch, started playing and swapping beating, but not to defend but to beat, as always showing skill and brutality! Tuca was very strong and very game, but to win the Katrina and not only have heavy mouth, heart and game … needs to be complete!