Sub Zero’s quest began on the night of 09-28-13, in which the date agreed upon and the stage was set for his first into the one-time winner, VI Asylum’s DT. DT came out fast and hard to Sub Zero’s chest but he couldn’t keep away from the jaws of Sub Zero. Soon after it started DT had his shoulders badly injured and looked like they were broken, and was being taken apart. It was all over for DT in 44. Sub Zero was back on the hunt in which the challenge was taken up by Headache Kennels’ Judo, a one-time winner out of Florida. The hype behind Judo suggested that Sub Zero didn’t have a chance because Judo had beaten a four-time winner for his first show. The date was set for the St. Thomas, V.I. Carnival convention. Sub Zero traveled to St. Thomas from St. Croix, V.I. where he was conditioned by Spartan Kennels. The stage was set once more and Judo came out hard and fast shaking Sub Zero like a rag doll. Judo’s speed was not enough for the jaws
of Sub Zero as he began to slow down and it was all over for Judo at 31.

Great thanks to Spartan Kennels’, Sub Zero, now at wo time winner, was back on the hunt once more and accepted a challenge by Freedom Born Kennels’ with a two-time winner. Both hounds would be going for the Championship title at the Stone City convention in Puerto Rico. Great thanks to Neney of Pleasant Hill Kennels’ who conditioned Sub Zero for this contest, but Freedom Born Kennels’ had some complications and the forfeit was paid the day before the set date. Sub Zero was still open and on the hunt for the Championship title. The challenge was thrown out by Smithbay Kennels as they had purchased a one-time winner O.T.C from the country of Russia named Beagle. The date was set for Pleasant Hill Kennels’ Agriculture Fair convention in the V.I. Everyone expected this one to be epic! The card had many great matches with kennels from near and far with most of the participants coming from the U.S. mainland. The stage was set and as tension raged, Sub Zero and Beagle were turned loose. They both went at each other like two heavy weight boxers, but in the long run, the jaws of Sub Zero proves to be too much for Beagle. Once again, Sub Zero had done major injuries to the shoulders and broken it but Beagle proved to be a worthy competitor and kept on trying. The punishment was becoming too much for Beagle to handle so he was picked up by Smithbay Kennels in 1:02. Beagle ran a hard courtesy which ended the contest (R.I.P. Beagle, a true soldier). By the end of this challenge, Champion Sub Zero earned a total of 95 points and led all potential V.I.-DOY candidates. Cane Valley Kennels awarded Champion Sub Zero the B.I.S trophy, over all other competitors on the seven card show. 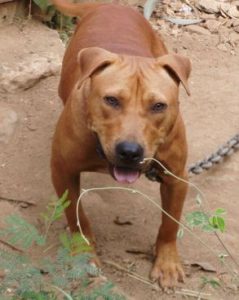 Pleasant Hill Kennels is proud of their new champion and happy to announce that he’s currently open to all Champions or better! Champion Sub Zero is a dog seen by many who compete in the Caribbean circuit and has represented for other great dogs and excellent dog-men in the Virgin Islands. Becoming the Virgin Islands Dog of the Year (V.I.-DOY) of 2015 is a proud honor for him especially since both of his grandfathers – Black Opps CH Mr. Brown and The Hostile Take-Over’s CH Return – won it starting 10 years ago. The Hostile Take-Over took Sub Zero’s grandfathers on the journey to earn the highly coveted tribute of being recognized as a V.I. Dog of the Year. Now, Pleasant Hill Kennels has paid homage to the lineage of his mother and father by continuing the legacy of excellent performers! Also, with both grandfathers branded as proven producers (P.O.R. and R.O.M.), it is only fitting to assume he should sire some fine offspring’s for himself. While the path has been laid and Pleasant Hill Kennels set the direction to continue on a forward track of winning, breeding is not the priority. Let’s all stay tuned for what happens next as the three time winner Champion Sub Zero B.I.S., the Virgin Island’s Dog Of The Year 2015, shows no signs of disappointing those around him!