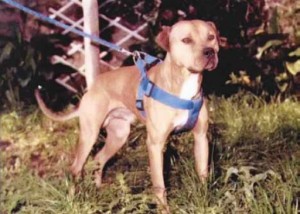 It was the July 0f 1996 when CH AZRA was in heat and Zinetti wanted to breed her to Yankee’s CH YANKEE R.O.M. He called Boban and they agreed about it . When AZRA was on her 11th day of heat and ready for the breeding Zinetti called Boban to say he would start that morning to meet him in Hungary. Unfortunately Boban had some problems with his passport and the deal was off. The next day Zinetti called Brothers who had Garner’s TOM on their yard at the tome. TOM was a son of Garner’s FRISCO R.O.M. and Glaskow’s Valory . The breeding was done the same day and repeated days after. Two months later, AZRA whelped a big litter of 8 pups. Unfortunately of them died but he still had Troy, Ludi, Frieda and Hydra…

Most of the pups were colored like Azra – black and white – except for Hydra, a red and white and Troy, a red dog that looked more like a Frisco type of dog. He was calmer than the others, and
also a late starter. Troy’s schooling began when he was 16 months old and he showed to be a very intelligent dog like he already knew what to do. He liked to work on the face the most or the head but as soon as he had the chance he would attack the front or back end as well. He had an average mouth. His style was similar to his mother’s. 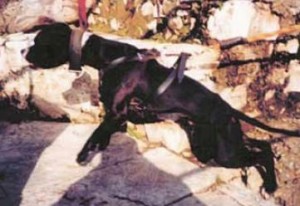 Zinetti’s Ludi, a 2XW and 2XL before he was 25 months old

When he was 22 months old Troy was tested against a very hard opponent who ate up his whole face and gave him a lot of trouble. Troy never made any bad sign, he changed his style and adapted it to his opponent showing intelligence again. After 45 minutess they both scratched fast and Troy passed his gametest. Troy was a good dog, but Zinetti had a better dog from that litter that took all of his attention. It was Ludi, one of best Z ever saw. He had it all, everything except Z’s patience for him to be old enough to be shown to the world. Ludi was only 12 months when he was matched for his 1st time. Zinetti took him as a substitute for one of his other dogs contracted for that match that had fallen ill. Ludi kicked the ass of Hazard Kennels’ BULLY for 40 but then he ran out of air and power and was picked up at 55. When Ludi was 15 months old he won a contracted match against G&B Kennels’ Tigar in 24 min. Ludi then went on to wint another short one before he met Pera’s Mungos for his 4th. It was a really strange contest, Ludi dominated for 1;20 but then without any reason he fell into deep shock and was picked up at 1:48. Ludi was only
25 months old at the time. Maybe if Zinetti would have waited for him long enough, he would have been one of best.

But let’s return to Troy’s story. Since Zinetti was taken away by Ludi he didn’t really cared much about Troy, so when he was 2 years old, a guy from Italy called to buy him. He offered a good price and Troy went to Madonna, his new owner. Madonna won two matches with Troy. First they won at 47.5lbs over Mariano’s Ministro Jr. who was a son of the three time winner Ministro. Troy won in 1:22 when Ministro Jr. quit. For his second he went in at 48.5lbs against a son of Grand Champion Mayday R.O.M. called Russ’ Red. Red didn’t make his daddy proud that day as he quit in 40. After the show Madonna had some private problems and Troy was sold to Casertano Kennels.

His Championship match was agreed on at 47.5lbs against another dog sent there by Zinetti. It was Zinco Jr. a direct son of the four time winner Yankee’s Champion Zink. Both dogs were two time winners. Zinco Jr. was owned by AGD Kennels and he was a real game one but not good enough to beat Troy. After his 3rd deep game scratch Zinco was picked up at 1:12, making Troy an official
Champion. There was one dog close to the weight of Champion Troy in South Italy. Most of the people claimed that he would silence Troy in short order. That dog was Frisco Jr. brought there by Vinny Romeo. He was a son of Frisco R.O.M. and BMW’s Panterita. Frisco Jr. had a big reputation, he was said to have silenced a few dogs in only few minutes and that he had the hardest mouth they ever witnessed. Troy had to lose 4 lbs to meet Frisco Jr., but he took the challenge for a huge bet and so the big money contract was set at 44lbs. L.G. conditioned and handled Frisco Jr. for that match. Frisco showed that his good reputation was not just a gossip. He demolished the front and back end of Troy very quick! Troy had a lot of trouble keeping that beast off of him. Finally, after a hard 30 minutes Frisco Jr. was slowing down and Troy started to control and later to dominate the match.
After 1 hours Troy started to finish his opponent. At 1:25 Frisco Jr. was picked up and he made a game courtesy scratch. Champion Troy won all the glory in this fight by beating a truly hard opponent. Nobody ever thought of giving him a chance to do that. After a long recovery and healing, the now four time winner Champion Troy was ready to be matched again. He was over four years old at the time. The challenge for his 5th arrived from G. Pompista who had a dog imported from Serbia who was reputed to have several “off the chain” wins there and the match was set. Artic arrived 2.2 lbs over the agreed weight and dominated Troy for the first 15, dragging him all over. Troy waited for his chance and after Artic lost some wind and slowed down Troy started to finish him in the back-end. The first out of hold was at the 50 minute mark. Artic had enough and won’t scratch back. Troy scratched like a bullet for his Grand Championship title. Grand Champion Troy won his Grand Champion title in 2000 and he was the first official Grand Champion of Italy. He was matched from 44lbs till 50.7lbs and he never ducked any of the opponents in his way. Many people thought they had a dog that would beat him, but the only thing they really did was losing their money.