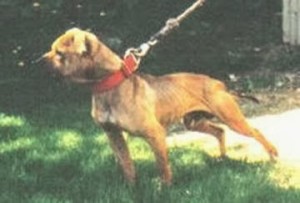 In early 1993, LeFonze and Bird drove their bitch Shabba out to Windy City Combine to breed her to Ch. Reno. Six pups were born, with Bird getting 3 and LeFonze getting 3. LeFonze favored a little bucksin male and called him Rolex.

When Rolex was 10 months old he was sold to Paul of the Jersey Boys. When Rolex reached about 12 months old we had a quick look at. He showed good signs at his young age. I later bought Rolex back from Paul when he was about 15 months old. A local guy in NY had a male from Kenny Gaines’ that he had open, so I took a chance on my young prospect.

Match #1, we hooked into The Ranger and his Diablo dog at 40 lbs. with Joe D. doing the honors. The pace was fast, Rolex started in the chest & front end with Diablo on defense. After 5 minutes, Diablo gets Rolex out with a nose hold. It’s all Diablo ’til about the 30 minute mark, when Rolex starts to come back working the chest. after two each Diablo is picked up in :44.

His second was into Second To None and the 38 dog at 40 lbs. It was very hot that night with Jersey Boys’ “T” doing the honors. They go at it fast with Rolex working the chest, and it’s over in :20, when 38 don’t run his first scratch. For his third, I was hooked into Full Force Kennels Junior at 41 lbs. This show didn’t take place as we traveled to “Brick City” from upstate NY and when we got there, they wanted us to travel another 3 hours to Philly. So, I later got him hooked into Strickly Business, with them using a son of Gr. Ch. Buster Brown named Blizzard at 41 lbs., with Second To None doing the honors. They go at it fast with things even. They both run 7 each, by then Rolex has gotten to the front end and he is declared the winner in 1:07.

Rolex made his championship at the age of 2, when most bulldogs are just getting started. He passed away 3 days after his last match. He was bred three times before he died, only 7 survivors from the three breedings. From those 7, he produced O.T.S.’s Ch. Casino and Mr. Kilroy’s Tinman, 2XW-1XL picked up game. His son Ch. Casino also produced the 2XW Loco. There is only one dog living off of Ch. Rolex and she’ll die with us.