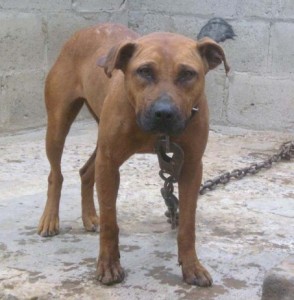 Lil’ Red was born in February 13th 2008, she was bred by Rancherita Kennels by Bean out Tsunami. Rancherita called me one day and told she had a gift for me, she told me what it was and I was very pleased but I took a while before I went and pick up the pup. About six months later she called me and told me to come and get her because they were fight crazy and she could no longer keep them together.

When we brought her home I could not believe how strong and determine this bitch was. Some time later we were trying to get a real inbred Little Gator dog started with one of my favorite bitches, my Negrita bitch, when this pup behind me was going crazy, so much so that she pissed me off something awful. I said “OK bitch let see if you are for real,” well she was for real alright, she got Negrita by the front leg and would not let her go. After sometime later we had a few dogs from TXT at the house and they had an inbred Game jane bitch they were high on and I decided to roll my eight month old pup for real, well she started screaming from the time she saw the square and when we took her away about 7 or 8 minutes later she was still screaming for more. After a few more rolls I decided that if I did not match her I was going to ruin this especial animal, I called Rancherita and told her what I was about to do and she told me go ahead I trust your judgment. I started looking and a friend of mine told me about this guys “”Dirttown”that had a bitch that had whipped one of Golden State Bulldogs dog real bad, I told him to hook it up, we met and got all the details iron out, the match was to take place in march which made Red 13 months. Everything went well, she worked like a horse, smart, willing, everything you want; except the last night prior to the show she got out of her keep house and ate half a bag of Nutro Max puppy dog food and decided to play with my kids toys, God only knows for how long. The next morning I go in my garage and I couldn’t believe my eyes, she was almost three pounds over the weight and it wasn’t water weight. I gave her some Dexa and colon cleanser, which I won’t say how much, but enough to make a horse shit all day. I called Buitre Farm and told him what was going on, he called them and they said as long as she is a quarter over we are doing it, I said “ I know I can do it”, well she took two big dumps in the crate on the way to the place, which Buitre couldn’t believe the way I was driving but I needed bowel movement and I got it. We went in and every thing went well, we were both on weight and the show was on.

For the first 15 minutes that bitch was throwing us around like a rag, but Red started to get in the throat real deep and the other one started to slow down and 26 minutes she took the count. After the fight we were working on her when she threw up chewed up military man toys, I thought for sure we are going to loose her, but thanks to God she made through and it was time to move to the next one. I had promised Rancherita that I would make Bean ROM before he died and Red was the best candidate. V.R, VIP and I decided to put a big show in november 2009 in Baja, since I was already living there I said this is perfect. We got hooked into Chucos Kennels of Texas, this was Red’s easiest fight, not because the opponent was easy but because my good boddy and partner Vinny Black did a wonderful job conditioning and their dog didn’t have enough to keep Red out and she got to her favorite hold at will ; then Chucos decided pick his bitch at 42 minutes mark. I must mention that they brought two dogs that night and they both lost, but they were in great shape and it was a pleasure to go into them. After this match I took Red back to Rancherita and brought her sister Jelly Bean and her dam back to get her bred to my Yoshi dog and get JellyBean schooled. Unfortunaly Red was kept in a kennel with bars and she went on to loose all her teeth and was only left with one bottom cutter. We put another show and decided to enter Red for her Championship and I didn’t want a push over, so we got hooked into one of the toughest man in Mexico if not the world, Mr. Maga- ña.

I told everybody that if she got in trouble I would pick her up in a heart beat. For this match a newcomer friend of mine (Turn Bull Kennel) did the conditioning under my watchful eye, I was moving and didn’t have the place to do the conditioning. The bitch he brought was a hard driving dog, but no real mouth, after 8 to 10 minutes I could see this bitch could not hurt us although we couldn’t hold her out I knew eventually Red was gonna get to that throat and even the score, well at the 50 minutes mark he decided to pick his entry up making Red a Champion, I was so exited I jumped in the pit grabbed her and took her straight to the Vet we had at the site, some people claimed I jumped before the ref had officially declared the winner, but Mr. Magaña being the dogger he is said “ No she won and that’s it”. While in the care of the vet Mr Magaña went over to see her because he had heard of her lack of hardware, when I showed him he was in disbelief of how this bitch had pulled it off. Lil’ Red is an exceptional dog and comes from an exceptional dog, Rancherita’s Bean ROM, this whole litter was match quality, in the same show Red won her Championship her brother lost dead game, earning GIS award. In future issues I will give the story of my Champion Piolo 3 xw dog, also off of Bean and his amazing brother TXT’s Chamuco 4xw. I would like to thank all those involved with this amazing little bitch, I could promise that form now on she will never have a tooth in her and hopefully her get are as good as her.