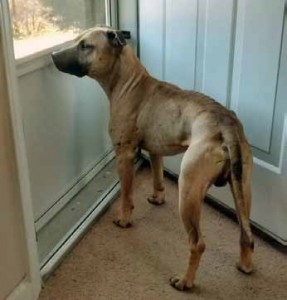 I’ve seen Gr Ch Cheyenne winning her 5th in Mexico, amazing dog! I’ve seen Gr Ch Pattycake in her own state, very intelligent, at a glance you wouldn’t know she’s a killer. I’ve seen Gr Ch Sweetie down South going into Black Rain Kennels…six of her oponnents didn’t make it pass the 40 minute mark, by 20the audience already figured out the outcome. So, I have a pretty good idea of an ace, and I would rate Gr Ch Gizzy
up there with those Grand Champions that I just mentioned… What’s so good about Gr Ch Gizzy? Well, He’s a six time winner comming from Slim and Mike’s yard from the East coast. He has abilities to avoid most bites by holding to the ear, side of the face and nose. While doing so, he would use his weight to control the directions where ever being pushed by the opponent. If his tail would touch the wall, Gizzy would turn away to avoid from being ramped into the wall or corner. From the beginning, Gizzy is straight up defensive dog. He would grab, hold to the head and dance around util his opponent would get weak. By the time the opponent is worn out, their faces would be swollen, full of nickel size holes and their nose busted up…Gizzy has more than average mouth. The final touch of Gizzy’s special talent is that when he sense that you’ve weakened, he would crank his offensive tactic by releasing whatever he’s holding on and goes straight to throat until his opponent is struggling for air. The way Gr Ch Gizzy went for the throat is the same way Gr Ch Sweetie finished her opponents. Unlike Gr Ch Gizzy, Sweetie would first come out with the intention to break you down then wait for the damage to set in and finish you off in short order. Gizzy would hold the throat from the side instead from the bottom. I have noticed that this way, the bottom or top jaw would hit the pipes much stronger than biting straight from the bottom. Biting from bottom side, sometime, cause the upper lips to shut off the nostrils and hard for the dog to hold on very long, and most likely the bottom dog would get away. When I first seen Gizzy, when he was going for Championship and I was accomplished Gr Ch Sweetie’s son first win. Ever since I become a fan of Gizzy.

Gr Ch Gizzy had faced one of hardest mouth opponents on his third time out. Both side were two time winners. I know the opponent’s owner very well, and he is a good dogman. Most of his animals are very game and
known to have a good mouth. For over two hours Gr Ch Gizzy had avoided the hardest bites, only minor injuries was being inflicted upon him. Right before the two hour mark, the opponent had bit so hard on his face and swoll up about half of tennis ball size within five minutes. But that was only the last short effort was made, and 100% of the spectators already made up their decision by then. At 2:05, the referee have anounced the Championship. The oponnent picked his dog up for good sportmenship. At the end the opponent also made his courtesy scratch, one game dog! For the whole two hours, none of them ever made a single turn. That was just incredible performance from both side. The losing side had shown me of how good the keep they’ve done, by pushing 85% of the time with less rest. On the winning team, they done a good keep too, but what amazed me was the talents and ability to stay away from trouble. On the 5th show, Gr Ch Gizzy has faced with another hard mouth killer. Most spectators had mentioned that the odds are on Gr Ch Gizzy. I can understand why they have said that: the opponent’s teeth was found sharpened close to the one hour mark, but Gizzy’s handler didn’t cared by then, cause it was just a matter of time that Gizzy will cure him out. Gizzy displayed the same manner as he did on number three. The opponent was so game but just couldn’t touch Gizzy. It was done like 45 minutes earlier of the two hours and seventeen minutes, but the ignorant owner refused to pick his up. I just can’t stand this type of dogman. I doubt he will ever see another good game dog like that again. At 2:17 minutes, Gizzy had finished his opponent and not even a turn was made by either side.

On his 6th show, the opponent’s crew was so sure that they gonna bring home the Championship trophy, they raked every penny that they have to put in the bet. What stuck in my head about this crew is that they came to the show 1:30 late, then talk so much s**t. At 37 minutes, Gr Ch Gizzy was about to finish him until they decided to pick it up. The courtesy scratch was asked, but the opponent couldn’t even stand up, the referee, Ch Hitman’s owner, announced Gr Ch Gizzy the winners… At the end, Slim & Mike’s Grand Champion Gizzy only had minors scratches, nothing major. I had only seen three of Gizzy’s shows and with these shows I can say that he belongs to the top dogs. I’m not a writer, so if there are some words that doesn’t sound right please excuse my way of using, or spelling it. All characters, incidents as well as places are fictitious. Any resemblance to real life events or persons living or dead is entirely coincidental and is regretted.