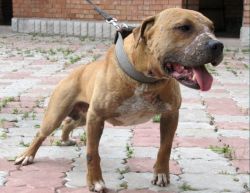 VIRUS was born on the yard of Mustang Kennels in Ukraine. His father was the famous Mustang’s IKE (POR), who showed deep game. Ike carried blood of Dragan Radonic’s dogs and Country Boys dogs. He bred Ike (POR) to Rhonda (POR) from Patrick’s bloodline. This bitch was not a fighter of high quality but Mustang Kennels wanted very much to have puppies from IKE, the puppies born in October 2003. Soon, there was an enteritis outbreak in the kennels. A red male with a big head was the first who caught the virus and for this he received the nickname VIRUS. The enteritis was mild, and all the puppies survived.

VIRUS debuted in October 2005 versus PVM’s KOSHA (1xW, 1xDmore than 2 hours). It was theson of a famous Champion HOOCH. Victor from SD Kennels put the keep on Virus for the match. VIRUS began to attack the chest and shoulders very hard. At 0:40 he made a favorite hold in the armpit and worked the hold for the next 10 minutes with Kosha screaming in pain. He was picked up at 0:53 and courtesy scratched. In March 2006, it was Virus versus Chuk & Gek’s LEKHA (2xW). 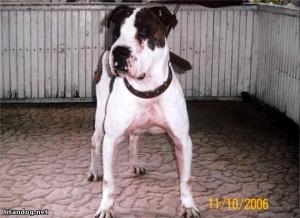 Lekha killed two opponents in less than an hour, but this day was picked up at 0:34 and courtesy scratched. The Championship match was in July 2006. The opponent was Dubrovin’s PETYA a son of PVM’s GR CH REDLIGHT. The battle began with both dogs swapping it out in the shoulders and head. At 0:30 Virus broke through Petya’s defenses and won after another half hour. Virus had the title of Champion for 9 months, after 4 months of rest he was again open. While we waited we kept hearing about two dogs, Wolchiha’s SANTIAGO(2xW) from the Urals Mountain and Kaluga’s MONGOL (1xW) a son of great warrior GR CH BARRACUDA. AC/DC, the owner of AC/DC’s SALVADOR – SANTIAGO’s sire – feared that a defeated SANTIAGO would prevent him from selling his “Alligator” dogs. So in order to avoid a meeting with Virus he made unrealistic demands and with long talks deadlocked the match could never be made. In the spring of 2007, BR Kennels from Moscow bought Champion VIRUS.

They teamed up with SD Kennels (coach and handler of VIRUS) and performed under the name SDBR. In autumn 2007, VIRUS was matched in Moscow with MONGOL. After 35 minutes Mongol received a severe injury and was picked up, but he showed the gameness to continue the fight. The 5th match VIRUS was released in Chisinau (capital of Moldova Republic) versus Julbars’ KOSOY (1xW). This bulldog was from Greece and the son of the famous destroyer Julbars’ GR CH KITCHA. Kosoy was a tough dog with bad muzzle fighting style. Kosoy quickly and easily killed the Bulgarian champion in their first match, and some dogman experts were not giving Virus a chance to win. But Virus broke Kosoy down by the 20th minute. At 0:40 Kosoy was picked up and runs the courtesy scratch to the applause of spectators. Virus has become a Grand Champion, and he was retired after earning his title. Meanwhile, SANTIAGO became a champion. On the fourth match he goes against the Big Snake Combine’s CH WINSTON (Dog of Year – 2008). WINSTON in one year won four tough and long matches. 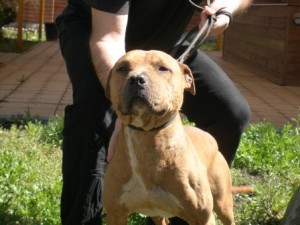 Four months after that, he went up against the Champion SANTIAGO. WINSTON was down after 10 minutes of battle. No one had seen him in such bad shape and Winston lost. He was sold in Kyuveyt. After a year of rest, he easily won his sixth against two-time winner from Serbia. In 5th match SANTIAGO’s opponent was Juris’ LUCKY (2xW). In the first 20 minutes Lucky gave Santiago a good thrashing. Santiago hadn’t seen such problems yet. He was in defense and did a lot of strange movements and turns. But Lucky was an old dog and had heart problems. This has an effect in the match and Santiago turned the tide of battle. Lucky was picked up at 0:58. Santiago became Grand Champion and “Dog of Year – 2009”. Who was stronger? This question about VIRUS or SANTIAGO interested all Dogmen.

And VIRUS returned after 2 years of vacation just to meet with Santiago. In the history of the Russian dog-game this was the first match between two grand champions. This historic battle took place in late spring 2010. Virus got seriously ill during the keep and almost died of kidney failure, but this didn’t stop him come match time. Virus outclassed Santiago, and after 0:30 Santiago could not stand on his own four legs, after another 15 minutes Wolchiha Kennels picked up and carried Santiago away without a courtesy scratch. The now ex Grand Champion Santiago died about an hour later.

SDBR’s GR CH VIRUS is a really great warrior and one of the best dogs in all of Eastern Europe. He possesses all the qualities of the best match dogs: deep game, pit intelligence, strength, hard mouth and the desire to make deep and lasting hold. He is a puncher-dog, like the Mike Tyson of the Bulldog world. In our opinion GR CH VIRUS is the undisputed best candidate for the title of Dog of Year 2010.