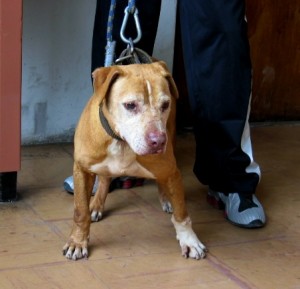 Invicto was bred by Pat Patrick and purchased as a pup by Pachacamac Kennels of Lima, Peru. Invicto came to Peru in 1993. 1993 would be the starting point of an entire legacy to come and the year where the history of the sport in this Country was changed forever. 1993 was the year where the legacy of this great animal began to be written as the most important producing stud that ever lived in Peru and South America. This great animal was responsible for producing countless winners and producers of winners. There was a time where almost every winning dog in this part of the world had Invicto running through their veins, even though while at the peak of his stud career the sport in Peru was still at its early stages. It wouldn’t be fair to judge his production record, considering that only towards the end of the 90’s the sport in Peru began to take off with several Conventions a year, comparing to the beginning of the 90’s when Invicto was in his prime and producing bulldogs after bulldogs, but who rarely got the chance to compete.

It is really a shame that so many great animals did not get the chance to show themselves in the lime light. We had monsters off of Invicto and were not able to match them due to the minimal amount of dogmen and Conventions at the time. How frustrating could be to know that you have such great animals, but are not able to do much with them? This was mostly the case in the early to late 90’s, ergo the reason I say that it wouldn’t be fair to judge Invicto’s production record, considering that while at his best years of youth and health, Invicto’s best offsprings were wasting away at the end of a chain because of the lack of competition. The sport in Peru started to move at a faster pace toward the end of the 90’s with more and more Conventions a year and each year thereafter. Many of his sons and daughters began to win and to show what an amazing producing stud the old man was. Not only were his direct offsprings winning, but his grand kids as well. The name “Invicto” was being heard not only in Peru, but in several other Countries in South America. He was loved by many and hated all the same. Dogmen knew that if you were bringing an Invicto dog you were bringing a bulldog, one who would stay there all night if needed be. As such, the name Invicto became the one to beat, you both loved the blood and used it, or you hated it and tried to wreck it. One of the many things that separated this great stud from the rest was his ability to produce producers. Not many producing studs are able to produce offsprings who in turn be come good producers and so on. Invicto was just that, an animal that not only left many great animals behind, but one that made sure his bloodline was carried on into the future and the path of greatness, by throwing great producers as well. If we take a look at some of the best producers that came directly off of Pat Patrick’s yard from 1990 through 2009, I can assure you that you will not find one dog that produced better than Invicto, or even come close to him. I’m talking about real numbers here, not imaginary, made up in someone’s mind. In point of fact, Invicto is one of the best producers that ever came directly off of Pat’s yard. Don’t take my word for it, do your own research and make your own conclusions. Let’s take a look at some of the most important animals that came directly off of Invicto or bred down from him. We are not going to list them all, but the few we are listing here will help us see the major impact and influence that Invicto had and currently has in the South American game dog world.

This is just a taste of the many great animals Invicto left behind. Each one of the animals mentioned above played an important role within this family. Some were great performers and some became excellent producers. The real kicker here would be comparing the ratio between animals produced, the amount of shows and the amount of dogmen in this area, to other studs who came directly off of Pat’s yard, but who lived in countries like the USA, which have a huge amount of shows per year and a greater amount of dogmen per capita. Using this criteria will evidently and without a question prove that Invicto was the most important producer that came directly off of Pat’s yard ever, but since in the sport of gamedogs the “what if” is left out for dreamers and “wannabees”, then we will never know. Real numbers is what counts and only real numbers get printed in the history books. Now, when I talk about the Invicto’s legacy, this doesn’t mean that we have reached an ending point and there is no more, absolutely not. In fact, the best is yet to come. Fortunately Invicto continued to produce up until a very old age, thus giving us two last litters, one at 13 years old and one at 14 years old. These litters were; Invicto bred to Pimienta and Invicto bred to Miss Redneck. We still have 2 living offsprings off of the Invicto to Pimienta litter and 3 off of the Invicto to Miss Redneck litter.

These animals are still relatively young and at only the beginning stages of their brood careers, but even though they are, they have already produced winners in the case of Commander and Olimpia. Invicto II, Tuffy and Mr. Redneck are the youngest and have just started to be bred within the last 2 years. In the case of Mr. Redneck he hasn’t even been bred yet. Knowing this blood like the back of my hand and considering that I own the last 3 living sons off of Invicto, I can say with certainty and with true authority, that Invicto II is THE heir and successor of the old man Invicto. Invicto II possesses all the qualities to be acknowledged and recognized as one of the best sons the old man Invicto ever produced. Unfortunately, circumstances got in the middle of Invicto II becoming a contract winner or even more. We had Invicto II hooked twice when at his prime and both times collected forfeits. The first FF collected was at 4 weeks to show date and the second time at only 10 days to D day. We continued to have his weight open for months after collecting the last forfeit but we had no takers, until it was finally decided to retire him. Many would think this idea to be crazy, risking one of the last 3 living sons of the old man and especially one of such caliber, but that is not why Invicto II wasn’t shown. We knew we had a bulldog, we wanted to show him, our own believes told us to show him first before being bred, we wanted to continued our tradition, but things just didn’t work out that way and unfortunately Invicto II was retired without being able to prove the world, what a first class bulldog he was and still is. His stud career started a little late since we never bred to him while he was on the trail. Only about a year and a half ago we began to use him in our breeding program. He was slowly introduced and bred to a couple of our brood females. We started to notice a pattern only few months after his first litters were born; crazy early starters. As the months went by and were getting older they continued to show that they “wanted” and were “ready”, so their wish came true. We now have several of them in school and are showing to have and excel on the same traits that made this family of bulldogs so successful, and even though the oldest are only 19 months old, some are almost done with school and ready to hit the circuit. Our profound knowledge of this family, plus the tangible prove of Invicto II producing great animals in only two litters, was enough to convince us into basing our yard on this great animal and new heir of the Invicto legacy. We have since bred almost every bitch we own to Invicto II, ergo to give him the well deserved opportunity to leave his mark in the sporting game circuit of this part of the world. So far every single litter Invicto II has produced has given us the same results; early starters with incredible prey drive and intensity. No matter how the females are bred, he still throws the same traits to his offprings. We can’t over look these tremendous qualities as a producer.

It wouldn’t be right not to mention Commander as another great bulldog and son of the old man. Commander has already produced winners and there are many more ready to enter the circuit. We are using Commander as a catalyst and refreshment to our already tight but very much competitive family of bulldogs. Commander has a special place in our breeding program and we are carefully introducing Commander to key brood females. We are expecting great results, results that will be up to par and beyond the quality of bulldogs that came from this amazing family. We thank the editor of this great magazine for giving us the opportunity to give the reader a small glimpse at what this great, but pretty much unknown family is about. The Invicto family of bulldogs is not a “flavor of the month” bloodline. We have kept this family tight, right, but most of all competitive for many years. We have also kept it away from peddlers and non active people. Most would agree that for a good animal to be successful, depends almost entirely in who owns this particular animal. If they fall in the wrong hands then the animal is doomed, but if they fall in the hands of true dogmen then the sky is the limit. As such, we will continue with our tradition, by trying our best to place these animals with the right dogmen and not letting our animals fall in the hands of peddlers, who would ruin our work and years of dedication, by making our family a popular “flavor of the month” bloodline, instead of being what it’s always been, one of the most successful families to ever grace the world of gamedogs.