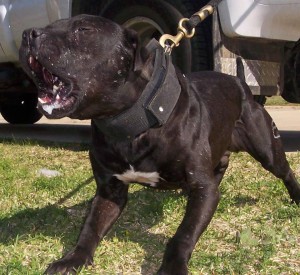 THERE ARE ACCOMPLISHMENTS THAT ARE DONE BY CERTAIN DOGS THAT WILL ALWAYS BE REMEMBERED AS NOTHING SHORT OF AMAZING. GARRETT’S CH JEEP MADE HISTORY BY WINNING HIS CHAMPIONSHIP, BY DEFEATING ALL CHAMPIONS. AFTER COMPLETING THIS TASK, HE WAS ELEVATED TO BEING CONSIDERED ONE OF THE GREATEST BULLDOGS OF ALL TIMES! WHEN ONE CONSIDERS THE STRESS THAT HIS OWNERS HAD TO ENDURE TO MAKE THIS DREAM COME TRUE…IT IS A HONOR FOR A DOG TO BE CONSIDERED TO BE ON THE SAME LEVEL AS THIS GREAT ANIMAL. SUCH IS THE STORY OF CASH MONEY KENNEL’S GR CH DA BEAST.

Cash Money’s Grand Champion Da Beast made history by defeating his second Grand Champion, andby doing so; he earned the right to be considered one of, if not, the greatest pit dog that ever lived! He was shown again; even though he won a very controversial win over Bluff City Kennel’s four time winner, CH Glock, where after running extremely hot, he refused to courtesy. There were many in attendance that left doubting this legendary animal, so Cash Money, against the advice of many experienced veterans, decided to take a chance and take Da Beast out for number seven! Baltimore Chuck headed the call, and came with none other than the legendary, Grand Champion Bo Duke! This was not your run of the mill opponent, because Bo Duke had won impressively in the show ring, and was highly touted as a super athlete! He left little to be desired in appearance, and was equally impressive by the superb conditioning that he displayed! He was a well-greased machine that could make even the best, most experienced veterans look like lame amateurs. It was noted that he was a prime candidate for defeating GR CH Da Beast, because of his uncanny knack for staying out of danger, yet getting some solid shots of his own. The stage was set for what was supposed to be the downfall of Da Beast, but once again, it ended up being a routine day at work for Da Beast!

Bo Duke left nothing to be desired, and begin by opening a lead against Da beast that none thought he could close in on. Bo Duke proved to be a formidable foe, and also displayed the same talents that enabled him to attain the title of Grand Champion. He was cruising to victory, and there weren’t many in attendance that thought he could lose after getting so far ahead. Just when you thought it was safe to go back into the water, there arose a shark’s fin, and it was closing in at an amazing speed. This shark’s fin was none other than Grand Champion Da Beast, and he was determined not to lose! For nearly an hour and forty minutes the crew that was supporting Bo Duke seemed to have wrapped this one up in the bag. They were popping the corks on the champagne, and giving each other high fives. The celebration began just a few minutes prematurely, because Cash Money finally realized that Da Beast was down, but not out! He called on the great warrior to dig deep, and began to chant, “WORK, WORK, WORK!” To the amazement of all present, Da Beast did just that! He began to try really hard to even things up, and it soon became evident that everyone there was witnessing something short of amazing! He rallied behind the call of his owner, and pushed on. He began to get in more, and was now mustering an offense of his own. Da Beast not only needed to win this race, but he needed to win in a way that would erase all the doubts that encircled him. When the smoke cleared at the hour and fifty-minute mark, he was declared the winner, and had added the name of Bo Duke to his trophy case! In his quest to win seven shows, Grand Champion Da Beast defeated two one time winners, three four time winners, and two five time winners. This is something that no other dog in the history of this game can claim, and it is probably a record that will stand for a long time. His name will forever be mentioned with the likes of Ken Allen’s Double Grand Champion Tornado, STP’s Grand Champion Buck, Garrett’s Champion Jeep ROM, Road Block’s Grand Champion Joey, and Jimmy Boots! It is a true pleasure to be able to say that I saw this dog win most of his shows, and he will forever be remembered as a true legend.