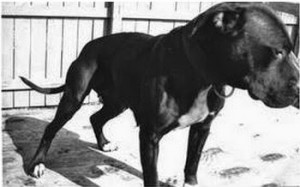 When the brother team of Saint Benedict’s Kennels decided to part their separate ways, Barney Fife left the partnership with only one dog.  A black female out of Wardt’sCh. Thunder and Dowdy’s Meenie (Dylan X Midnight Cowboy).  According to Barney Fife, Vespers was worth every penny of the $700 he gave his brother.  She became his house dog as she was the product of 20 years of his breeding.

When Vespers was young, Sinner’s dam was put on her at Milk Inc. Kennels and although Vespers was quickly picked  up, she was the only dog to scratch back to Whisky.  Bob The Slob,Kyle P. Pathfinder all saw Vesper’s go back to the Whisky dog and I was amazed. Although the time was only :10 min or so, but unless you know the dogs being mentioned you could never understand what was happening in that short time frame.  It was disgusting and I even looked away for a second when I saw the joint of Vesper’s front leg. Vespers is a bad ass bulldog and I would also own her real fast.

For Vespers’ third, she was in full heat and ready to be bred, so Barney Fife said that he’d stop it if she would not start.  He need not have worried, because she smashed into the chest and then hit the stifle as it became available.  Barney did not know it, but the opponent (Stormy) was a 1X OTC winner, co-owned by Kyle and Beach Boy Billy sired by Denny’s Ch. Bo out of Milk Inc.’s Trick Bag.  Stormy got on Vespers nose and got her out of the rear end.  Vespers tried, but could not get past Stormy’s face chewing.  The swelling was so bad that Vespers was double fanged.  Barney tried to unfang his dog, but there was so much blood on Vespers’ face and neck, that it was like handling a greased pig.  Stormy did a number on Vespers’ face, constantly sliding away from Vespers’ charges and throwing her down while chewing on the nose.  Vespers could only get a good hold when Stormy swapped out holds.  At one dramatic point, Stormy came off the head and went into Vespers’ rear end.  Vespers got into Stormy’s rear end and the exchange did not last long before Stormy was back on the nose trying to get Vespers out.  At :15 minutes Vespers was winded and Stormy was not breathing hard.  I was willing to pick up at this point, but Kyle wanted more time.  Vespers was sucking down blood, but she never let being tired affect her fight.  If anything, she became more violent, actually shaking Stormy completely through the air.  She’d pant 2 or 3 times in hold and then shoot for a good hold.  Stormy did a good job stretching herself back out of the way avoiding Vespers’ constant rooting into the throat.  They stick broke them and  scratched them 3 times each.  Vespers’ was like a shot out of a cannon.  You could not say “one thousand” and she was across with a “thump” as she pile drived Stormy and Kyle.  To her credit Stormy made each and every scratch.  At :25 minutes Vespers was finally able to  land the heavy shots she’d tried so hard to land.  She was on a down Stormy with full leverage behind her so it was stopped before Vespers could really hurt Stormy.  Barney Fife was later surprised to learn that Stormy died that night.  Vespers was biting extremely hard and just those few deep holds in the throat and stifle was enough to kill her.  That was the second bitch that Vespers had killed in just three rolls.  In her second roll, Vespers got deep in the throat and chest immediately and killed the bitch in :08 minutes.  This time, she killed a well regarded bitch with a defensive style in :25 minutes in front of a lot of dog men.  Barney Fife received a good offer for Vespers, but refused it.

In Vespers’ first and only match, she was matched into Handyman’s Vice Grip at 41 lbs.  Alien handles Vespers, while James handles Vice Grip, a buckskin.  Both bitches under weight.  Two hard mouth bitches set a furious pace, Vespers is all offence, but Vice Grip is destroying her face.  Vespers takes a terrible face chewing and is fanged, but comes back hard in the chest and throat.  At :28 minutes James concedes the match, Vice Grip refuses her courtesy scratch.  Vespers shoots across for her courtesy scratch.  Vespers won the Best In Show trophy, while her son won Gamest In Show.

Last I heard she was bred to a son of Banjo and was then spayed.  I am not sure about the spaying, but I am pretty sure. X-treme Kennels have this blood, close and it would go great with Panther blood and the dogs are all a bulldog should be. Just wanted to throw some top honest quality dogs and kennels whom to deal with, whom I personally would or have dealt with.