Seadensun’s GRCH Gritler is a 62.5% inbred from GRCH Yellow breeding with 25% caver blood and 12.5 % inbred CH Saloon breeding. He is a very well conformed dog and his owner’s house dog.

He won easily over Mamba, a 2x winner that was the best prospect at that stage, an above average dog. Even after 4 wins to his credit, many people still said he had it too easy and that his gameness was never really tested, only after Chilli Baba you could see what a great dog he is. He died after the match only to be revived by his crew, and the 5th he was tested further, for nigger caused a lot more damage in one match than all the other combined. In my opinion it takes a great dog to make a comeback from such a beating and still win under 40min. On his Last scratch he nearly scratched nigger and company out of the box. He is currently one of the all-time greats in South Africa, in all classes, especially yellow class. He is retired and did us proud becoming a GR CH after his sire GR CH sir Thomas 7xW POR and also producing 2 xGRCH’s himself, GRCH Talouse 6xw and GRCH Countdown 7xw. Now if that’s not the making of a true game dog then what is? 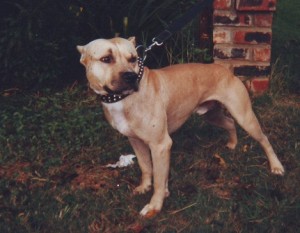 Gritler at a young age

Gritlers blood line was imported from the United States in 1987 by Brainy Smurff, the dog Tant’s David POR was later sold to K. Botha for he did not like the dog as a pup. K. Botha later made a brother-sister mating which did not work well, but when crossed with caver/saloon dogs, now that seems to hit the spot. They performed so well that one cannot actually believe that these match dogs could come from such mediocre parents and also produce champions in return. Maybe this highly inbred strain just wanted an outcross to show its hybrid vigour? Good luck to this well established bloodline may Gritler and his blood’s legacy live on forever. (By Sunnyboy)

Both dogs were weighed, Gritler & Psycho on weight. Ref order handlers to release and so they did, dogs meet in the middle and it’s on. At 10 min both dogs are working hard and changing holds. Five minutes later Psycho gets hold of Gritler leg and breaks it. Gritler screams and manage to get Psycho of his leg by going on defence. Psycho starts to tire and Gritler seems more in control. At 24 min a turn was called on Psycho. 3 Min later MaBaker handles which completes a good scratch. Gritler is now in complete control, in the 33rd min Seadensun handles Gritler who also completed a breath-taking scratch and starts working Psycho’s throat hard, Psycho has no answer for Gritler’s ability. At 41st min Psycho still has no answer for Gritler and cannot defend against him. At 43 Mabaker concedes making Gritler a 1x winner. Both complete their courtesy scratches.

Dogs were weighed, ref calls for dogs to be released and so they did. Gritler takes control immediately, Kalieb not getting any holds. At 10 min Kalieb is driving hard but still not able to break through Gritler’s defence. Gritler at 25 Min works a down Kalieb very hard, a turn was called on Gritler and ref acknowledge. Seadensun handles his dog who gives a great scratch meeting kalieb hard in his own corner. 3 minutes later Kalieb was handled who also completes his turn to scratch. Gritler starts to work Kaliebs throat hard. At 32 Minutes combine kennels concedes the match, making Gritler a 2x winner. Kalieb did not complete his courtesy scratch.

Dogs were weighed, Gritler being 200 gr over weight and forfeit was paid by Seadensun. Ref called handlers to release their dogs and so they did. Mamba gets a very good chest hold. Gritler is struggling for the next 2 minutes to get mamba of his chest. At 5 min Gritler succeeds and hits a bad bleeder on Mambas nose, Mamba gets through Gritlers defence back into the chest, Gritler takes him of and a few minutes pass where mamba’s bleeder is starting to weaken him, his face is now badly swollen and full of blood, Gritler is now working a down Mamba very hard at 30 min. Gritler starts to work mamba’s throat and Mamba struggles to breath, his tongue turns blue. By now K Clubs party complains that he should pick up his dog, and so he did. At 37 minutes he concedes by making 2xw Gritler a Champion. Mamba completes his courtesy scratch. He died soon after.

Dogs were weighed. Gritler was under at 23.600kg. Rev calls for handlers to release their dogs and so they did. The dogs meet in the centre, the match was very equal for both dogs for 20 min. The match could still go any way for either dog. Gritler shows better ability than chilli by putting chilli time and again on his back. At 25 min chilli defends Gritler shoulder and throat attack, 10 min later Gritler starts to run hot and starts to exchange throat holds for shoulder holds in order to breathe. At the 39th min Seadensun calls a turn on Gritler and ref acknowledges the turn. 6 min later chilli’s front leg is taken out completely and struggles to walk stumbling forward. At 1 hour chilli doesn’t manage to get up from the floor and Gritler starts to work a down chilli hard in the throat and shoulders. At the 65th min Seadensun handles Gritler who makes a hard scratch into chilli. 7 min later buffalo bill handles chilli that completes a very game scratch. At 1 hour 17 min buffalo bill conceded and made CH Gritler a 4x winner. Chilli died later.

Gritler’s weight was put out and picked up by Red Devil’s CH Ore who cancelled the match on the day for he did not agree with Seadensun’s guest list. The second attempt was against ma bakers 2xw tuffy where they apparently had a sick dog who matched, that was only an excuse not to match CH Gritler they later tried to spot pick CH Red and lost. A third attempt with Kojack’s Nigger was successful match. Weight was set at 23.200 kg for they could not make 24 kg Seadensun agreed to meet their demands for now he was desperate. 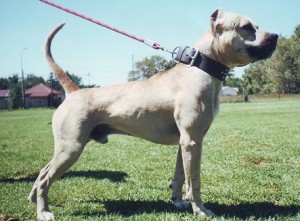 Dogs were weighed, Gritler 23.200 kg and nigger at 23.500 kg. Both dogs over no forfeit taken can be either party’s match. To start at 21h00 and so it did. Ref calls for handlers to release their dogs. The two meet in the middle. Gritler loses an tooth in the process. Suddenly nigger puts a bleeder on Gritler’s cheek and seems to have torn a hole right through his cheek. Nigger is damaging Gritlers head area causing huge damages and exhibits a tremendous bite. At 7 minutes Gritler has gaping wounds on his head and neck with a bleeder that seems to have stopped on his cheek. 4 minutes later Kojak calls a turn on nigger. Ref acknowledges. Nigger still has better ability. Gritler struggles to make his mark. At the 18th minute Gritler starts to take control by breaking through Niggers defence working the shoulders and throat. 3 minutes later Kojak handles nigger who completes a good scratch. Gritler is starting to dominate while the rival is showing signs of fatigue. At 23 minutes niggers back legs are starting to collapse. Gritler seems to have taken out niggers front legs with a few good shakes and is working the throat and shoulders hard. Gritler is now in total control. At 25 minutes Seadunsun gets a handle on Gritler which completes a hard scratch, nearly taking nigger and his handler out of the box. 2 minutes later another handle took place which Nigger completes. Gritler is now putting nigger on his back and working the shoulders. When Seadensun handles for another time, he comes flying out of the corner. At 32 minutes Kojak sees that nigger has no answer for Gritlers style and ability and cannot get up while Gritler is working him. Kojak concedes nigger at 32 minutes and so making Gritler a Grand Champion 5x winner. Nigger completes his courtesy scratch with some motivation.

A few good ones Gritler produced was. 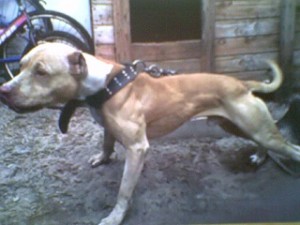 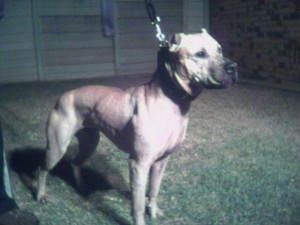