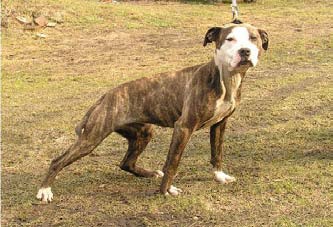 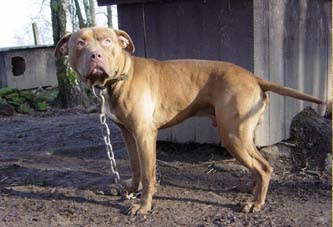 Anthea was bred by Genetic Kennels out of Komany Kennels’ Gr Ch Nabuco and the one time winner Genetic’s Saint Annie. Now, before we move on I’d like to share a few words about Gr Ch Nabuco, he sure deserves it! Nabuco was bred by Radek as well, and was sired by Mladen Krkeljic’s legendary Champion Giroux dog, a four time winner that went a draw and later lost his last game against Gr Ch Crnooki. Nabuco’s dam was Genetic & Goodson’s Tasha, a pretty good producer of game dogs bred down mostly from Carver dogs. When Giroux was bred to Tasha they produced the two time winner Naomi, the two time winner Clyde, who also lost one game and Nabuco, who won five at between 49-51 lb: Pristina Boys’ Crveni in 1:45, Sekula’s Slavko in 1:20, Extreme’s Ombre in 38, Dingo & Celas’ Kan in 1:45 and Captain’s Mag in 32. So, with that being said, let’s get back to Anthea, I’ll even skip the “intro” part and jump straight into the action! Anthea’s first outing was into Strong’s (Roman’s) Sugar at 36,4 lbs back in 2007. Anthea was handled by Locco of Black Gold Kennels. Referee Pitfans of Factor Team. Sugar came in at 36 lbs. Anthea was in a really bad shape, with milk in her tits because of a false pregnancy. She was so dehydrated that we had to give her IV fluids and at the weight-in, she came in at 36,8 lbs. Now, keep in mind that Anthea’s real pit weight was around 37,5 lbs. Anyway, Sugar’s camp agreed on the weight and the match was about to start…Sugar starts out with a real offensive attack working the front legs and chest. Anthea is playing in a more defensive style, trying to get the front…without any results… she is really weak. Luckily for her, Sugar doesn’t has the mouth of an alligator either. Anthea is working the head from the bottom. After a few scratches each, the pace becomes a little slower, and at around 1:30 Anthea finally manages to get on her feet, and starts working on the head. She keeps it like that for 20 more…til Sugar starts to sing! Sugar’s turn to go and she scratches. Now Anthea’s turn…and she makes a real hard core scratch. A few minutes later Sugar is sings again. At 2:07 it’s Sugar’s turn again, but refuses. Anthea makes a real fast and game scratch. Anthea’s second was into the Viking Boys’ Ginger at 37,5 lbs back in 2008. Ginger, was a sister to Champion Vigo and Madziar Chain Kennel’s two time winner Meba. Both dogs on weight and in great shape. Referee Columbus. Ginger starts out very fast destroying the left shoulder and all the toes on the right. In the meantime Anthea is working the nose real hard. After a few scratches each, Ginger’s battery is losing charge and breathes heavily because of the damage Anthea did. At around 1:20 Ginger’s handler proposes a draw. Proposal not accepted. Finally, at 1:35 Ginger is picked up, and maes an incredible dead game courtesy. Anthea makes a deep game courtesy as well.

Some time later Locco of Black Gold Kennels ran into some personal problems and decided to give Anthea back to her breeder, Radek of Genetic Kennels. Radek didn’t wasted much time and Anthea was hooked at 35,2 lbs into a two time killer named Perka. Referee Paco. So, after a short journey to Casablanca the show is to begin! Anthea was conditioned by Radek and she is in an excellent shape and very focused. You can see the fire burning in her eyes. Perka’s camp is absolutely confident in their dog, making comments about how hard Perka’s mouth is…but what about her gamenes? Now, that is something that no one has a clue about yet…Dogs meet in the middle with a crack, both losing a teeth! I never saw something like this before! Perka is like a monster truck. Anthea is playing a defensive style, working the head while trying to hold Perka out. It’s 1:50 already with no turns, no out of holds. Both are doing their thing but it seems Perka is losing some power and she’s going downhill. Anthea is exhausted but feels it’s now or never. It’s time to switch from defense to attack and gets into the throat and stifles! Perka is on the bottom. After a perfect handle it’s Perka’s turn to scratch…and she completes a real slow dead game scratch! Anthea’s turn to go and she gets into the throat again. Perka is picked up at 2:19, but it’s too late already. Only one more to go for Anthea and…Genetic’s Champion Anthea!