MEGA was born in the yard of Captain in Serbia on 10 July 2000. Her sire was Captain’s KOCHIZ and her dam was Captain’s MEGA, that was 50% of Captain’s CH. THOR R.O.M. breeding and 50% of Red Boy/Jeep blood through some of the best dogs we have had here. She was a very ugly puppy, she didn’t look as a bulldog should look.

After a while she ended up in the yard of Team Ilic where she was raised, schooled and matched. At 10 months of age MEGA was tested against the hardmouthed Border’s MARY where she badly broke her front left leg. MEGA didn’t matter too much about her injury and she ended her test with flying colours. Unfortunately her leg healed really bad. 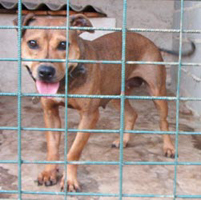 After a short recovery Team Ilic decided to match her even if her leg looked twisted and bad, MEGA didn’t show any bad sings with that leg during the keep. She won her 1st match fast in 20 min outclassing Dejan’s ZUTA at 14 kg (30,8 lbs). MEGA was a lx winner at 16 months of age. MEGA went without trouble through her 1st match so she was contracted for her 2nd only few months after and the opponent was Sestovic’s BONI. MEGA dominated there thanks to her speed and talent and BONI was picked up at the 30 min mark, making MEGA a 2x winner. At that time MEGA already had a good reputation and Team Ilic looked for the best opponents for her Championship match. And they found Dream Team’s PRACKA who had the reputation of destroyer, there were rumors that PRACKA already silenced few females. She was a daughter of the well known Montenegro’s CH. JOCKER 5W, 1L. It was a classic match between two outstanding females, but MEGA was better and smarter and after 30 min of total war she took control and dominated till the very end. PRACKA was in deep shock, exhausted and she quit in 1 hr 48 min. MEGA scratched like a rocket for her Championship title. CH. MEGA was only 26 months old when she earned her Championship.

MEGA was a super intelligent bitch, she wasalways one step ahead, always controlling the situation in the ring, dictating her furious pace with a great finish. After that match Team Ilic got a good offer from Zinetti from Croatia and CH. Mega was sold. There Zinetti wanted to match her again but unfortunately CH. MEGA was part of a hard kennel accident, where her back leg was broken and her match career were over. Because of that Zinetti decided to retire her for brood, and she showed that she can produce match quality dogs.