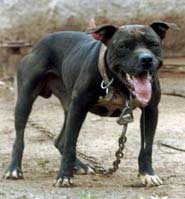 This article is about one of the best producers of South America, I’m writing this little story for the Sporting Dog Journal so that subscribers may know more about dogs from Brazil. In my opinion T-Bone and Macaco ROM were the two best producers in South America, both producing Champions and Grand Champions during their stud careers. Moreover, both dogs were not only great producers, but they were match dogs as well. Enjoy the story of this great dog!

When PH from Locco’s Kennels started in the Gamedog world, he couldn’t have imagined the great impact and contributions he would provide the future of Gamedogs in Brazil! He went to the United States to visit some yards and purchase some dogs to bring back with him. One of those yards was that of Pat Patrick, where he bought two dogs named Solo and Bloody Mary. Solo was off of Patrick’s Kid Blackie, out of Patrick’s Black Beauty and Bloody Mary was off Patrick’s Howler out of Patrick’s Sally. When he bred these two together, there was only one male born, and he was
named T-Bone. PH had some problems that resulted in the sale of all his dogs. T-Bone was sold to a breeder named Alvarenga, before later being sold again to a man named Tito, owner of El Oro Kennels, who was just starting out in the sport of Gamedogs. After a time, Tito took T-Bone out for his first and only show into a hard biting 1xw dog named Kayser by Mr. Enrique Morfin from Mexico. TBone, showing great ability, stopped Kayser after 50 minutes and was declared the winner. Afterwards, TBone began his stud campaign and sired several winners.

Among those produced were Grand Champion Cutia, who won her title in Spain with TexMex Kennels; Champion Q-Suco, a very good dog who beat a dog from Southern Kennels and was awarded Best In Show twice. When T-Bone was bred to Koata POR, he produced Grand Champion Cutia, Champion Candango and Katem 1xw, Best In Show. He also produced a lot of one and two time winners, including Black Bone, a dead game dog who lost in 2:32 to D’Rocha 2xw. For these, and many other reasons, T-Bone was one of the most influential dogs in all of South America, his prolific production record speaking for itself. He has passed away now, but his blood is still alive and well in his offspring, who are proving to produce good dogs much like their forefather.