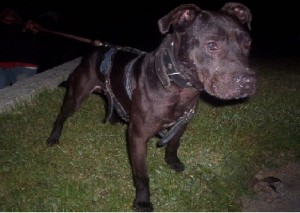 The Southerner once told me, “I will never own one like him ever again”. That was soon after he lost CH. Diamond Dan. It was not until the very same thing happened to me that I fully understood the extend of his words. CH. Raul 4xw lost his life doing what he did best on Sunday night, 5 September 2004. Let me reflect on the life of an exceptional dog that was over in 3years 3mnths. There was an uncharacteristic urgency from Megabyte to pit this dog against the best Cape Town had to offer. Even his two breeding were done with a haste that pre-empted his speedy exit from this world. He was bred the last time the day after his second match. Seven of his offspring are on the ground to try and emulate their father. He found no other bitches worthy carriers of his sperm, only a daughter of CH. Joshua and another daughter of CH. Thunder were privileged enough to bear his offspring.

Nothing in his pedigree suggested anything to get excited about. I was told to roll him but not to expect much, and not to even consider breeding to him as he was so scatter-bred that nothing good could come from it. As it turned out both predictions were wrong. CH. Raul defied the wisdom of some experienced dogmen. I think it was for this reason why everybody always expected him to loose. After every match the words always were, “Congratulations, but I don’t think he will win the next one” For his forth match Sandman, Hudson Hawk kennels and Coastline Kennels combined resources to challenge him. Their inbred Bolio was the hottest thing since chili, but cried like a baby when the Bullyson got hold of him. Zombi is now affectionately called Grombie. As all exceptional dogs, RAUL made his opponents look like chickenfeed. There was always a question about the quality of his opponents even though some of them later won matches against other dogs. Even 20G Jasper did not escape the wrath of CH. Raul, and he is a better than average dog, in my humble opinion. A novice handler ruined his teeth in unnecessary schooling. By the time his career started he had to adapt his style to make up for his shortcoming. In his four matches he displayed four different styles. It was almost like he had a different style for every dog. You could not select a dog to combat his style, as he would change it on the night. His matches were usually made while he was fighting, because everybody was convinced that they had a dog for him. Nobody liked him either because his parents were curs, or because he killed their charges or his fighting style were not convincing to them. Even after winning his fourth match I had three potential opponents phoning me to match into the Champion. What arrogance!!! Don’t they know that is exactly why great dogs like GR.CH.Yellow became an 8xwinner? Well, for CH. Raul it was not to be. Two weeks after his fourth time out the BOUNCER started conditioning his next opponent, although the date was only set for 7mnths later. Such was the fear that gripped the hearts of his opponents. Nobody wanted to loose into a dog that had no fangs. Raul was still recovering from hunting when a son of GR.CH.Gritler got off the chain and did what a son of GR.CH.Lukane could not do. It was like the Grand Champions conspired against CH. Raul to get to the title of GRAND CHAMPION. Raul was driven backwards into a fence where his collar got stuck. Roy Jones then took out the shoulders of a defenseless opponent who choked to death. The novice escaped with minor wounds to the jaws. Even if I never own one like him again, I will count myself among the chosen few who were fortunate enough to own an ACE… Many thanks to Freddy, Lawcy, Bunny, my friends in Kimberley and everybody else who supported CH.RAUL. We know Cape Town can sleep peacefully again, now that the champ is gone. Go well great little warrior, you have kicked more butts in 1year3mths (4matches) than many, in a full lifetime.

Raul proofed to be the complete package. No out of holds, or turns. Ace is picked up and scratched “game”

Chico cannot handle the Bullyson and is picked up “game”.

Raul’s mouth (minus 1 and .5 fangs) is too much for “The Lazz” It is all over by 50mins. The more experienced dog men are too embarrassed to pick up. Their dog is sent to Bulldog heaven while in the box. Raul is declared Champion at 1hr05 when Lazlo collapsed in the corner while trying to scratch.