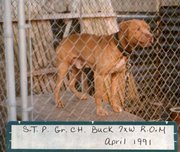 As a pup Buck was sold by Pat Patrick to a physician. He proved to be an unsatisfactory pet and was sold to the late Alan Waldman who matched and won two with Buck in the low 50’s. One over Aldo’s Zeke, who later became a Champion, and the other over Winchester’s Conan. STP purchased Buck from Alan Waldman when Buck just turned 2 years old and campaigned him at his correct weight, 46 lbs. As soon as STP started to work Buck they saw he had incredible stamina. In STP’s hands, Buck demolished all of his competition, which included some highly regarded match dogs. Buck did not dazzle fanciers with ten-minute wins, but he had virtually no weakness as a match dog and always dominated his opponent, no matter what style.  Buck’s first match, with STP, was into Tito’s Tonka, which was no match for Buck as Tonka stopped in less than :30 minutes.  His next was against Captain America’s Jumbo Jim. Jumbo Jim was a double bred Gr. Ch. Hank dog, and was hand picked to defeat Buck. Jumbo made an incredible scratch at 1:30, but by 1:57 he collapsed in his corner unable to go. In Buck’s 5th he went into Rodney’s two time winner JR, littermate to Gr. Ch. Yellow ROM. JR was handled at :52 minutes and could not go any further. Jr. later went on to win three more.  For Buck’s 6th match was against P. & H.’s Rocky, a rough son of Ch. Jeep and Gr. Ch. Miss Rage. Rocky was picked up in a little over an hour. Rocky went on to win his championship after another loss to Super Gnat’s Gr. Ch. Ace. At this point Buck was retired as a 6 time winner and not yet 4 years old. I was conditioning Super Gnat’s Gr.Ch. Ace for his 4th match, into P. & H.’s Rocky, when I received a call from STP. He explained that after 2 years of retirement, his Gr.Ch. Buck was contracted into Ricky Jones and Gr.Ch. Sandman, at 48 lbs. Both dogs were exceptionally seasoned match dogs with similar styles and STP predicted that the match would be a long one. This was the first time in history that two registered Grand Champions were to meet.  Rebel Kennels Gr.Ch. Sandman was bred and raised by Ricky Jones from a Rascal / Jeep and Boomerang cross. Word had it that Ricky was able to take some of the unwanted dogs from some very good dogmen, and by sheer determination and good sense Ricky had bred bulldogs that could compete and win over the best in the country. Some of the best match dogs, at any weight, were either owned by Rebel Kennels, or were matched into Rebel Kennels.

There were about 25 fanciers waiting for the match to start. My friend Peter from Holland was betting on Sandman, while I was betting on Buck. This was the first time we were not on the same side of the betting. The dogs were released and Sandman shot over like a rocket and got a good hold. When Sandman got to the stifle, Buck slowly and deliberately got him out. Ricky got all excited and said that Bucks stifle was broken. For the first 20 minutes Sandman was all over Buck, but then Buck started to dominate the action. Buck was a little stronger and had a little heavier mouth. He was taking the match to Sandman, but neither could get much of a lead over the other. Both dogs could hardly be held in their corner as they rocketed across on their scratches. About an hour and a half into the match Sandman got a good hold on Buck’s neck. As Buck tried to twist out of this hold, Sandman held on and a stalemate ensued. Sandman would not release his hold and Buck could not get free, so the two Grand Champions were locked motionless and time dragged on. It seemed that both dogs were asleep. Buck started to vocalize his frustration at being unable to move. Ricky became even more excited, interpreting the noise as a sign of Buck wanting to quit. Nothing could be further from the truth as Buck finally extricated from the hold and resumed his dominance over Sandman. Ricky not only began to denigrate Buck but also STP. At one point he said that he was going to kick Buck’s ribs in because he was such a cur. I encouraged him to go ahead and do it since the foul would leave Buck the winner. I think that Ricky began to realize that Buck was going to beat his Sandman dog and this was his way of dealing with that possibility. No matter how many times and how many ways Ricky verbally abused Buck and STP he never let it bother him. STP stayed with his dog and ignored all the outside shenanigans. STP gave fanciers a good demonstration of coolness and decisiveness in a tough situation. This was an even match until at the end when Sandman began to falter and it was clear that Buck was going to win. At three hours and 17 minutes, after 3 more scratches Sandman took the count. Buck’s courtesy scratch, was a running one and he slammed into Sandman.      We hustled Buck into a nearby shed and I started an intravenous line. Buck received 10 cc’s of Azium in about 800 mls of Ringers before he ripped the line out of his leg. In an adjacent shed, Ricky worked in an effort to save Sandman. I was told that he gave Sandman an injection of Epinephrine, which is often used by human rescue personnel. The shot of “Epi” as it is known to the members of the rescue squad, killed Sandman immediately. Buck would not be still so I stopped the IV, which had leaked into the surrounding tissue. Buck stayed at my house for two weeks after the match, recovering from his ordeal. At 5:00 AM every morning, Buck would start his scream / howl, which echoed throughout the house. When I walked him outside, Buck would try to lunge at the other dogs in my yard, even though he could hardly stand up. It was obvious that his spirit had not been broken in spite of the lengthy battle with Sandman. Once recovered Buck went back to STP’s and the old warrior lived the good life, breeding bitches and eating good food until he died.   http://www.apbt.online-pedigrees.com/modules.php?name=Public&file=printPedigree&dog_id=428