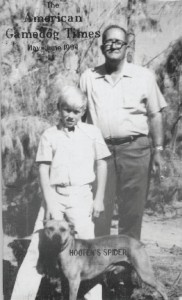 When I was nine years old, my father and I had gone to see Maurice Carver for some reason or another. I was walking around his yard and noticed some twelve week old pups in a pen. I was captivated and knew that I had to have one. I had worked some summer chores around the house and had managed to save $13.00. I had no idea how much the dogs were worth, but I figured I could probably buy at least two. Much to my disappointment, Maurice informed me that all of the pups were already sold.

He must have seen the look of disappointment on my face because he quickly led me over to a day old litter of pups and told me they would be ready to move in eight weeks. He also informed me that he was taking deposits and that the pups just happened to be $13.00. Well, I paid him the full amount up front and told him I would be back in eight weeks. We shook hands and the deal was done. Eight weeks came and went and my dad went back up to San Antonio to pick up the pup. He returned with the dog and a one dollar bill that Maurice had sent back; because he said there wasn’t a pup alive worth a summer’s pay and he knew that I would probably need some dog food. The pup instantly became my best friend and went with me everywhere. He was never matched, but was rolled several times and showed well. He remained with me until I joined the Army in 1981, when I sent him to my dad’s house where he died soon afterwards at fourteen years of age. He was a belly mate to Davis’ GR CH Boomerang, Petronelli’s Fox and Art’s Missy. Not bad for a $12.00 Bulldog.
Norman G. Hooten