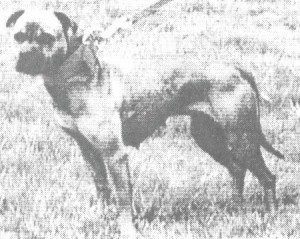 SDJ CH Dusty won her three shows in one year and four months time, also slowing down to have a litter of pups in this time. Todd and I never realized how much we had asked of her until a few days after her Championship show. We set up her first into our good friend Confederate States of America with his Crazy Bitch 1X Winner. We never looked at Dusty until this night! CSA’s Crazy never knew what hit her.

Dusty took over and had her way with Crazy. Finally, at the :28 mark, Crazy was picked up and ran a three legged courtesy scratch. Lonesome Oakie hooked us into our second opponent, Clambar Boys’ Jubilee 2X Winner. We traveled again for this one, to their back door to take Jubilee of the circuit. These two bitches were ready for battle. Dusty was in the best shape of her life. It was an all out war until Dusty got a hold of Jubilee’s stifles and breaks her down. At :38 Jubilee stands the line with Dusty taking Best In Show! We went for a rest this time and had a litter of pups but were ready then for number three. After seven weeks she was off the pups. Seven and a half months after her second win we were talking with our bud at Krazyside Kennels and looking for number three. KSK’s CH Nino and Brickhouse’s CH Benny Blanco was set and we wanted to be a part of this. We hooked into Work Kennels’ Mamba again traveling to our opponent. Dusty was so ready and so was Nino about twenty-four hours before show time when he escaped from his room and gets on Dusty in the hallway coming back from outside. We were all hyped up after the thirty seconds they were together! Dusty and Mamba met like a tornado says HavanaChico. These bitches were set to destroy each other and they were nasty. Mamba keeps up with Dusty and gives her back every bit she is dishing out. At :50 Work asks for a scratch to continue and at the :55 mark Mamba turns and then stands the line at 1:10.

CH Dusty went through all she could and I had to look to Brickhouse’s Angel for assistance. Robin stayed with Dusty all night while Angel worked on her and by twelve hours after her win Dusty comes back to us! CH Dusty is now retired and will be with us for the rest of her days. HH owes CH Dusty a life of luxury because had she not been the caliber of dog she is, none of this would have been possible. Keep Scratchin’-Hidden Hollow