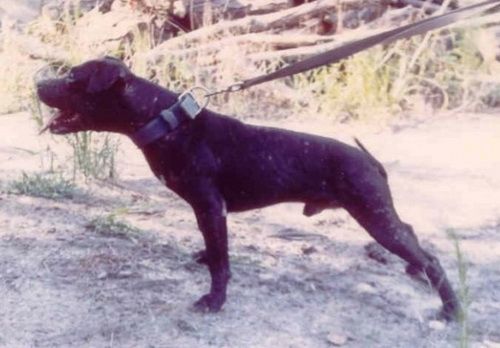 In the late 1970’s and early 1980’s, Fletcher Chavis bred some dogs that and Dogman would be proud to own. Much of his original stock was from that grand old dog, CH Yellow John ROM. For years Mr. Chavis campaigned with that inbred Red Boy dog that he had gotten from R.T. Bass, he was rated one of the best. During the mid 1970’s and outstanding discovery was made. Vernon Jackson had a dog that he had gotten from Don Mayfield that he called Hank, inbred from Mayfield’s Lightning II blood. Hank never started until he was three years old, but when he did, he not only turned out to be a phenomenal performer, but an excellent producer as well. He was bred to a bitch of Bob
Rast’s called Queenie and from that litter came Jocko, Argo, Pearl, Apple and a few others good ones. Mr. Chavis ended up with Jocko and that was the beginning of the famous Red Boy/Jocko bloodline. Mr. Chavis campaigned with Jocko and he looked to be unbeatable due to the inherited trait of Hank’s back end style. Jocko became a Champion and was retired to stud. Jocko was bred to his sister Apple and several inbred bitches that he sired. These bitches were bred to Yellow John, a triple inbred son of Tramp’s Red Boy, and that was the beginning of Jocko’s fame as a producer. Out of these breeding came Tant’s GR CH Yellow ROM, Gainey’s GR CH JR, Chavis’ Roho, STP’s GR CH John Boy and his littermate brother CH Toro, along with Super Gnat’s dead game Boots and a host of others. However, there is another side of this story that few people know about. Mr. Chavis had bred a bitch by the name of Lady Sassy Mead. She was half Red Boy and half Lonzo’s breeding. He bred Lady Sassy Mead to CH Jocko and created a whole new strain of dogs. In that litter came Dangerous Dan, Thor, Margaret T and Rose. Rose was the Great Dam of those Grand Champions Yellow and JR. However, these dogs were black in color and were thought to not be up to the standards of the original stock and were sold as pets.

During my travels through the south I purchased a son of Dangerous Dan and a friend of mine purchased a male and a female. The male I purchased was called Termite. My first show with Termite was in 1983 with Hargroves. I came in over weight and had to pay the forfeit. Later on in that year I signed up to go into Tant. I was declared the winner at: 38. Next, Termite won over Jacky S. at :20 and I was ready for Termite’s Championship match. Crenshaw and Tugboat had won several matches and both had outstanding reputations. I couldn’t resist the opportunity of going into the best. Tugboat lived up to his reputation for the first thirty minutes, then those Jocko traits started kicking in and Termite was the winner at :58. Well, by this time I was satisfied with his performance and was considering his retirement, but again I couldn’t resist another challenge. This time it was the grand old man himself, Fletcher Chavis. We couldn’t agree on the terms of a contract so Mr. Chavis sold the dog to Rastaman and said that Big Joe had the perfect style to beat Termite. Rastaman’s Big Joe put on a great show, but at 1:17 Termite won his fourth. Termite was retired after that and was put out to stud. He has produced some very good dogs; among the best is GR CH Cirus. Cirus had won five, including beating Solo’s CH Thunder and there will be more to come. Termite died in November of 1995. Carolina Kennels 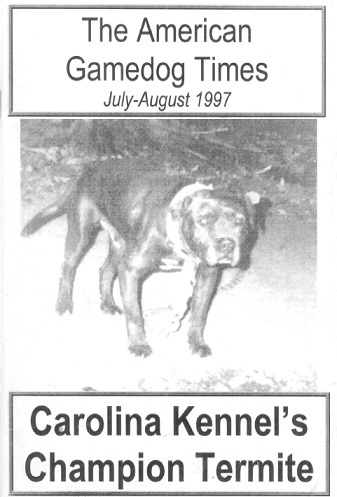