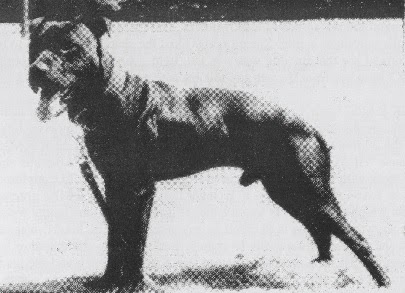 Malcolm X. It was December ‘92, I went to attend a Roll Convention, there was this fancier by the name of Rainer, he had 3 young dogs, all females, with him, the word was that if anybody saw a bitch he liked, Rainer would gave away for free! O.k.; the first bitch apparently got a heart failure under the stress put upon her, the second bitch did start but snapped a lot, but the third, a little black bitch, made a huge impression on me, she fought extremely well against a very good, bigger bitch, this black bitch looked very intense and because of that she ‘jumped’ on Rainer to get this bitch, and also needless to say, Rainer thought he would keep this black little bitch a little while longer…We all went home and some weeks later, I got a call from my friend Marcel from Raging Bull kennels, Rainer had called him and offered him the bitch plus her littermate brother, also a black who, according to Rainer, was an even better prospect, Marcel did not have any room left so the two were offered to me, I liked the bitch so I said yes. In February 1993 I went to pick up these two blackies, I had already decide I would call the bitch ‘BLACK RAIN” (I liked that movie) & the male ‘”MALCOLM X”, when I got at Rainer’s, he had “X” running in the back yard, he looked just like “ELI JR” on the old pictures, if this wasn’t your typical “ELI” dog, which was? I insured Rainer that if the dogs had the potential, I would make them CHAMPIONS, as I consider myself to be a top-conditioner. When I got home with the two I felt “X” was a huge pain in the butt since he was a very noisy & hyper dog which I don’t like, at least the noisy part of it. At that point I began to run out of room for my dogs so I decided that “MALCOLM X” and “CUJO”, a good dog which came from Billy/ Irene Stevens, to settle which one was going to stay, “XI” was 4 lbs. bigger so he came with no work under his belt whatsoever, “CUJO” was a greyhound type build dog, I conditioned him like for a match and gave him, because of his lack of strength, some steroids. They fought extremely hard for 33 minutes, because “X” never had a workout in his life, his hind legs were folding under him, but somehow he found a resource to push “CUJO” around with just his shoulders & front legs, this told me I had a Game one, what also surprised me, is that without hind-legs, he still bit hard. At the 33 min. mark. “CUJO” couldn’t scratch but you won’t hear me calling that dog a cur, I feel he was a credit to his breeders. After “X” was cured & rested I started to condition him, he showed to be a very workable dog with lots of natural wind, you could just see his muscles develop with each workout. When I felt he was in really good shape I tried to match him against Keystone kennels, we agreed but that match didn’t come of. The Keystone Kennels dog went on to loose against CH. “BLACK BEARD”, who later met “MALCOLM X” I was then informed by St.B.’s Ron & Peter that P. Parker had a very good dog that was sure to beat, “X.” I went to see Parker and we agreed to a showdown. The “X” keep went really nice &, slow, I started to get really confident in him. Since I really liked the shape he appeared to be in, at showsite, Parker informed me that his dog was 1 ½ lbs. light, I knew then I’d go home with a one time winner, “X” bored in from the get-go.. this became a walkover win for “X” in 29 minutes.

Back to the ‘BLACK RAIN” bitch, I really liked that Roll I saw of her, I rolled her again with my “ZELDA JR” bitch, an old retired bitch with a lot of wrestling ability, however, I had to rescue “ZELDA JR” at the 20 minute mark, I had my friend J.P. to handle “BLACK RAIN” and he almost got bit because “BLACK RAIN” definitely wanted to go ‘back’! After she was cured & rested I started to work with her, she was a pain to work since she didn’t like anything. I matched her into Parker ‘s. RASTA” (who is a 4 X W inner today “BLACK RAIN” got car-sick on her way to the show which caused her to loose 2 lbs. of fluid, it wouldn’t matter since. RASTA” would have won anyway since she is SUPER! In any case, “BLACK RAIN” was the aggressor in this a how but she stopped biting at the 16-minute mark RASTA- got a hold of her leg and broke it. Since I brought “BLACK RAIN’ in steroid free & she did feel it and she made some noise which I can’t blame her for, I gave up the match but I was happy to see that “BLACK RAIN” definitely wanted to go’back’! All this time everybody thought that “SAMBUCA” was THE dog in our area (he had ‘MALCOLM X”, weight), the word was he was rolled with S.T.P./ High Energy kennels GR.CH. “BIG FOOT” and story went that “SAMBUCA” was the better dog, in any case, “SAMBUCA” demolished everything he was rolled & matched into with. I saw him rolled myself and I was impressed. I thought, ”X” would have 40 % winning chance against him. Since they had the same eight, and “X” was open, I gave the P.M.K. boys a call and we agreed to a showdown within 3 minutes. I had already worked him for 3 months so I just continued to do so, since “X” was going to meet the ‘bear’. I decided that, with the help of my house-mate Marja, I would do anything, no matter what the expense, to bring ”X” in the best possible shape. We did just that, and it paid off “MALCOLM X” took a killing for 20 minutes, staged a comeback to finish a truly Game “SAKBUCA” in 56 minutes, this was a truly classic show which should have been witnessed by more fanciers, the ones who missed it really ‘missed’ something!

After this show ‘MALCOLM X” had another match in just staying alive, we all fought for 2 weeks, and thank God he pulled through! After he was cured, I put him in his big kennel and all I did was fatten him up, he must have weighed around 70 lbs. for months. After 2 months of doing completely nothing with him, I started to work him very slowly and very easy, I was as gentle with him as possible because I didn’t want to match him again before HE was ready to do so. I worked him for 3 months, he seemed to know he was a winner, being more arrogant & cocky after each win …. Since I wanted for “X” to shine and not only be the best but also to be known worldwide to be the best, I tried to match him into B. & W. Kennels CHAMPION “SPICE” (Giroux- “BOOGER” R.O.M. x B. & W. Kennels’ “CARRIE” that match didn’t come of, luckily, I was able to match “X” into CHAMPION “BLACK BEARD” this dog had won several in Mexico, Texas & Europe, he had the name, which I felt was important, and he was said to be near 6 or 7 years old, which ‘guaranteed’ me that “X” would prevail, after all, if “X” could beat the best 52 pounder in the world he most certainly should be able to beat an Ace over his prime … This time however, his keep didn’t go smoothly, he cut himself 5 days before the initial date, the CH.”BLACK BEARD” backers agreed to postpone the show for 2 weeks. Then “X” got too light and I couldn’t get him to gain weight, he looked however, o.k. Enough to give it a shot and 2 days before the showtime, I had him thoroughly checked out by a very good vet, he gave me the green light. “X” checked in 3 lbs. too light and CH.”BLACK BEARD” was dead on weight. I felt I lost my advantage, a dog slightly ‘past his prime against a lighter dog evened things up a bit …. Seen through my eyes, however, it was a one-sided affair, with “X” being the agressor & top dog, and CH.”BLACK BEARD” coming to the top in flurries, but “X” never let him stay there for to long. “X” is offered a scratch to win at 1:09, “X” accepts and scratches straight & true. I am very sorry to say I lost “X” two days later. He sure seemed to be o.k., I guess I let myself to be fooled by him because he wasn’t o.k. at all. Samart’s CHAMPTON “MALCOLM X” 3X was bred by Rainer, he was born on October 3 1991, past away on September 27 1994. I am not the kind of guy to lure on my past success, I just feel obligated to give “MALCOLM X” the credit he so deserves. I just hope I’ll be fortunate enough to own someday a dog who can approach CH.”MALCOLM X” outstanding winning qualities!
http://www.apbt.online-pedigrees.com/modules.php?name=Public&file=printPedigree&dog_id=7499