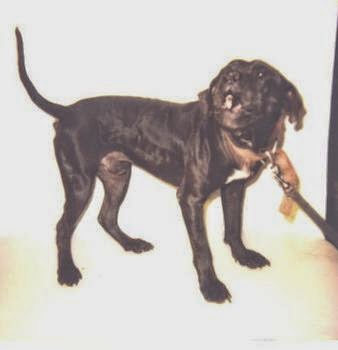 I honestly believe that I was destined to own this magnificent pitbull. I tell people, and I will repeat: “The happiness and luck smiled at me, and I got this great pit bull.” It can be said twice about Pro Sport’s CH JEFFERY (Jeffery). I got it for next to nothing, because it was scary and strange-looking puppy. In addition, he was from the first litter from Elliot’s SIX BITS, and nobody knew what SIX BITS manufacturer. As I said – it was fate! Comparing with other dogs line ELI (ELI), which I owned CH JEFFERY started late. I did not even hear him barking until until he was 9 months. One day, he behaved as if he wanted to fight and I decided to check it out. So, a week before he turned 1 year old, he was put in the first part against a strong and trained pit bull, which was a bit more weight. I saw this dog before, and thought he would dominate my puppy. I told his owner that want only a 5-minute role, and he agreed. When I removed JEFFERY with chains, he was crazy. We let the dogs and JEFFERY grabbed opponent’s ass. After 2 minutes, 19 seconds opponent owner yelled, “Get him off my puppy”. With this cry was born champion. JEFFERY When turned 18 months, I decided that he was ready to start a career soldier, and would put it up against the best pitbull Pitman, who could find. I must say that I am new to the sport and my information about the active pitmen while confined to the territory where I lived. Then a lot; talked about one dog in our area, which belonged to a man, never send match reports. When I contacted him, it turned out that this dog lost and he bought an opponent who beat him. Of course, I put my dog against this good pit bull running in his head named Chip’s HEIGHSMAN, who won 2 does not match the contract. match took place in Texas. In the ring HEIGHSMAN confirmed his reputation holding JEFFERY first 17 ​​minutes. On the 22nd minute JEFFERY struck defense HEIGHSMAN’a, and he made ​​the turn. JEFFERY began to attack in the legs and chest and HEIGHSMAN stopped for 31 minutes. (SDJ, July-August 1996 # 1061). Sometime later JEFFERY was ready for the second match and I called many pitmen offering match. And again, I would put it up against the best dog I could find. The choice fell on Chester’s PETE. He won one match and non-contractual one contract for 40 minutes.PETE was a tough, strong and geymnym pitbull. GORGEOUS! We agreed on the timing of the match and sent the makings; match was supposed to take place in Georgia. I should be smarter because JEFFERY did not look very good after 15 hours away by car. But everyone learns from their mistakes, and we then long mocked about it. PETE attacked more severely and was faster, a JEFFERY just held him. Rotation was announced at JEFFERY, but I honestly say this is not seen; but this is not important, as JEFFERY again attacked opponent legs and chest. PETE stopped for 39 minutes and tried to jump out of the ring when performing JEFFERY coiirtesy scratch. (SDJ, January-February 1997 # 101). Do JEFFERY were wounds on the head and face, but none of them was serious. So, JEFFERY was twice winner and again I offered many pitmen match, because I wanted to make sure it is an upscale dog; want to put it against the Champion or Grand Champion, but unfortunately, this did not happen, and I accepted the offer from Pope Maloney (Pop Malone) set against his double winner nicknamed REX (REX). Apparently, he really wanted to win JEFFERY, because he started telling people that I was hiding from him. Well, he wanted to – he got! The third match was held in Texas and was the longest match JEFFERY, but not the toughest. REX confirmed his reputation to protect, hold JEFFERY most of the match. But when JEFFERY got to him, it caused serious injury. At around 45 minutes REX attempted to execute a scratch, but runs out of time. (SD J, July-August 1997, # 1056) JEFFERY became a champion and I’ve heard a lot of chatter about what the dogs were his opponents and I’m not a very good coach. Well, that’s what I want to say about it: when CH JEFFERY was opened for matches, I turned to the famous pitmen (such as Millbuster, Dead Serious, Fat Bill) for help to find a worthy opponent, and I always went to the opponents! So, owners of “mongrels” who spend more time talking than to walk the pit bulls, leave the ring or shut up! I want to thank Jerry Clemmons. Fat Bill and MAD for their help and attitude. I also want to wish good luck to Yankee Boy George, Hard Rock Kennel, The Gambler, Brian Baley and pitmen all first rate, which met at the Pig Picking’97. Oh, yes! Another tip for those who have much to say – stay away from DEAD SERIOUS, they beat it hurts!
http://www.apbt.online-pedigrees.com/modules.php?name=Public&file=printPedigree&dog_id=14223