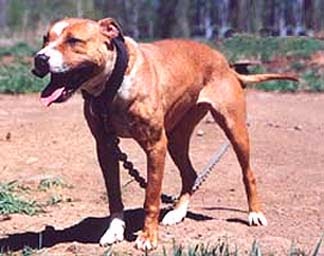 The Can-Am boys became involved in the Deacon/Assassinator dogs when I bought a female pup called Doris, she was a good one. Ch. Doris was 2 1/2 years old and she died, but had gone so far. We were at a loss and we contacted WCC to see if there were any more litter mates around…Becky was for sale, she was untouched…No kennel accidents, nothing. Becky wa housebroken and a real nice dog. The money was in the mail and Becky came into heat. They asked if we were interested in breeding her. I was, my partner up north was not so sure. My hope was that if Becky was half as good as her sister Ch. Doris, Id like some pups. Becky was bred to WCC’s Rocky, a Jeep dog- the litter was raised in Canada. I had moved back to the east coast. Becky had 8 pups, 1 female she sat on and killed and 7 males. After raising the litter, Becky was bumped and then rolled 2 times for about 30 mins on a Maloney bred female from PP. Becky and Jeanie had banged each other up pretty good.

My Canadian partner informed me she was 1st class and better than Ch. Doris. At this point, I had made some contacts on the east coast. I mentioned the weight: Camp had a 2x winner, we were hooked. Becky was worked up north and then arrived with her conditioner and handler, my partner a few days before. Camp had a kennel accident and couldnt use Dixie..Camp was straight up, said he would just pay the forefeit. We wanted the show, he ended up bringing a Hackman bred female called legs that was young and rough. Legs did have a keep on her and we were the 2nd show that day Red Rhodes was ref of both shows.

My partner is very confident and has already convinced me we were going to win. Becky and legs are released and the action is fast and hard, both dogs show mouth. The show just started and Camp’s yelling you better pick her up she’s going down. The Can-am kid is muttering bigger than life that it is ok, Becky is just getting started. He and camp are banging into each other jockeying for position to cheer on their own dogs. Red Rhodes is shaking his head, the dogs were going all out. Legs is on the losing end and Becky is in the back end, Legs is done. Camp picks up in 22 mins. Camp was the type of kennel we wanted to go into….with him its not a hobby. its his life. Anyway, my partner found us another show this time in Canada into another real player. The Captain of Canadian fame its female at 39, her 1st show was at 38. Rollbar was the ref, it was a 2 show day. I had a male at 38 that packed it in at 30 min into the captain.

Then the bitches, Becky into Lucina. The Captain says he’s to use the bitch he thought we had a good one. The Can AM kid is mental, the male I just lost with only came because I was going to see Becky. An hour later the shows going to happen, the Captains Lucina is the crowds favorite. Lucina was black amd built like a male. Becky was the smaller dog. It was even for 15 mins and at one time Becky looked to be in trouble. Its the Captain’s Lucina to go as the ref Barnes tells the handlers to face their dogs. Becky is turned around, the Captain was real slow to turn Lucina. Barnes is yelling at him to face his dog, he does- next Barnes tells the Captain to release his dog. My partner and I know Becky scratches like a rocket, head and teeth first. Unknown to me he decides to release Becky who nails Lucina and the Captain in the corner. Wow, just like Becky had done when he asked Camp if he could courtesy Becky back into legs. Becky was ahead and its all over in 33.

Some months pass by and a man from St. B’s calls me, hes got 2 bitches one at 38 or 39 the other at 40, which one do I want? Becky is a 39 we will go at 39 bring whatever u want. At some point as part of the pre-show foolishness St. B called the Captain to ask about Becky. The Captain told him “If you go into those people, against that dog, you will lose your dog and your money”.

Becky had already had 2 matches, 2 keeps which he did and I had to condition Becky for her 3rd and handle her this all in a 12 month period. I am not the conditioner or the handler my younger partner is…Becky was in shape but the 2 keeps had really taken a toll. StB’s had Barney Fife, Matt and Peter from Holland shows up to handle thier dog Brenda. I know Peter had done more dogs in this country. Peter released Brenda and I released Becky the show had begun and im in the square daydreaming. Becky and Brenda are swapping it out, Becky looks good but not like she has the fast hard mouth.

Matt calls for a bet for 2 to 1 and Becky is slightly ahead. The dogs were fanged from time to time. In fact to my disbelief Peter tried to handle my dog at one point so his dog could be unfanged by the ref! There were no turns, no out of holds, Brenda had been the down dog for the last 25 mins the seats were mostly quiet and the n Peter says to me “Im going to pick up”. He asked for a courtesy, Brenda came across the whole way. Brenda was a game dog. We feared for Ch. Becky it was her toughest match. We kept trying different stuff, Camp yelling instructions as she stabilized. We hit the road.

Ch. Becky was from a litter of 4 Ch. and 5 others that were never shown. All thanks to WCC.
The author of this story is Tim S.