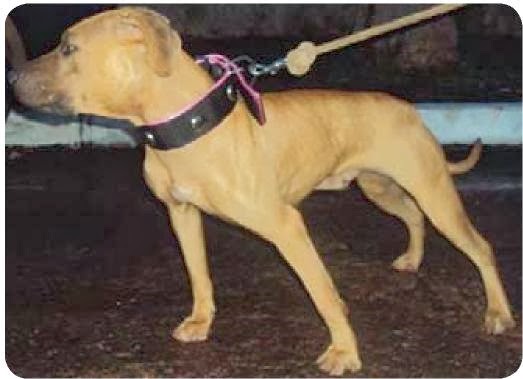 Ronaldinha was a light structured yellow bitch with black mask, bred by a good friend from a pedigree made up mostly from GR CH Mayday dogs. At the age of one, she was rolled with Machita, a bitch bred down from GR CH Buck blood, and proved to be a was very fast dog that fought the face and throat, never giving any chance for Machita. After 10 minutes, Machita was badly hurt. Ronaldinha proved to be a great dog, so me and my friend and partner, Pancho decided to buy her. We just knew that she’ll bring us satisfaction. With that in mind, we decided to take another look and challenged Gallus Kennels, one of the better kennels in our country. We actually asked him to bring his best bitch, and that is what he did. Gallus brought an experienced 42,5 lbs bitch, called Bellon. Our one year old Ronaldinha weighed only 37,4 lbs, but despite her disadvantage, she finished Bellon in only 30. We were very pleased with her performance. After some time a great opportunity has come up to participate in a major international convention. The negotiations with Revolution started right away and after some back and forth we agreed at 38,5 lbs. Most of the top notch dogmen from South America were also present: Imperios Kennels, Gallo Grijalva, Geg Kennel, JEJ Kennel, Revolution Kennels…

The day of the show arrived and Ronaldinha looked re­ally confident. She was going into Potenza, a dog bred down from GR CH Croata. Ronaldinha starts very well, right on the throat and biting really hard. Potenza tries to get on the top but Ronaldinha is on the muzzle all the time. Potência rapidly starts to lose fuel and breathing heavily. By the 35 mark, Potenza is looking for an exit, with Ronaldinha keep­ing her from jumping the wall. At the 40 mark, Potenza is picked up by David. Ronaldinha makes her courtesy, looking for more, but the show is over. This is how our 17 months old dog earned his first international victory. She was acclaimed by all the present as the best conditioned dog of the convention. We’ve been the first to travel, fight and win in an international convention.

Ronaldinha’s second outing was against a tough crew, T-Bone Kennel Club and Primates Kennels, a very dedicated team with many years of experience and numerous victories under their belt. They had won everything in Brazil! Ev­erybody was afraid going into these guys…and so were we. We already lost a hard one against Primata’s CH Kimbo with Adbizi in 2:37. Anyway, we agreed to go into their CH Lazara dog, but they brought another dog, a very strong Eli bred dog known for being capable to do some serious damage. To make a long story short, Ronaldinha won in 43. After this show, nobody wanted any piece of her…but hey, there is always somebody with enough courage to do it.

For her third, and final show, Ronaldinha faced one of the best bitches of the country, Abutry Kennels’ Mell, a two time winner. Both dogs going for the Championship title. All bets were against Ronaldinha, as Mell won both of her shows in less than 20, completely destroying her opponents. Anyway, Ronaldinha was very strong and in top shape. We had full confidence in her, but it proved to be a very hard fight, to be honest, the hardest fight she ever fought. Ron­aldinha has played defense for about 30, but being the ex­pert she become, she started going for the muzzle and eyes. Afer the 30 mark, Mell started to lose her enthusiasm and Ronaldinha kicked in higher and higher until winning the show in 50. Unfortunatley, Ronaldinha didn’t make it after the show, the damage to her chest was too severe and she was not able to fight any longer, this ending makes the story happy and sad at the same time. Ronaldinha, wherever you are, you will always be in my heart. You were not just another dog for me, you were my friend and partner! Thanks a lot for all! Please forgive me, it was my fault!
http://www.apbt.online-pedigrees.com/modules.php?name=Public&file=printPedigree&dog_id=368635