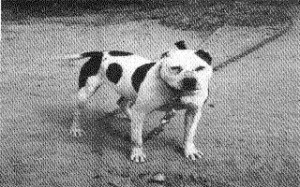 Her first time out she went into Bio-Hazard Kennels’ Baby from Florida, giving up a little better than three pounds, the weigh difference showed for the first twenty minutes and she sustained bone breaking damage to her chest area. But, she got through at :25 and at the :30 mark, she was in the back-end and it was over. Baby was picked up by Bio-Hazard.

After a short rest and extensive work…draining and taking bone fragments out of her chest area for a couple of months. Finally, when it was felt her chest had healed, Sheba was contracted into Crillo Kennels of New Jersey. This keep turned into a nightmare as anything that could go wrong, went wrong. Sheba’s chest flared up again and constantly had to be drained during the keep. Two weeks out, she was treated for flea infestation and poor judgement of a insecticide mix lead to her being poisoned and had to lay her up for two days. Rick should have just paid the forfeit, but he believed Sheba’s capabilities could over-ride these misfortunes. Crillo Kennels’ Stormy was given a pound for travel, and they were another half pound over at the scale, again Sheba, giving up weight…one and a half pounds. This one went even for :40 until Sheba got in and her mouth again makes another one scream at :50. This one takes the count around :51.

Her third match was into another two time winner, named Winnie Pooh out of Smig’s Ch. Boogieman. This dog had been to the 2:00 hour mark and was said to be a dog you would have to kill to stop. First the first time now, Sheba was on something her own size and weight. In :15 Winnie was in ball screaming her brains out. It was such a one-sided fight it wasn’t an enjoyable sight. The shrills were unbearable and at :28, Winnie refuses her first scratch.

Sheba is said to be the best bitch Rick had ever owned in his 23 years into the dogs. The mouth and strength of Bullyson / Maloney crosses, when bred correctly, produce the stuff dogmen’s dreams are made of.