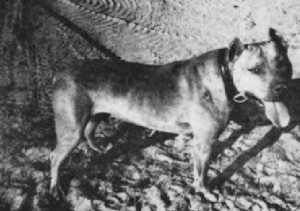 I’d like to pay tribute to truly one of the greatest dogs I’ve ever seen perform in my 12 years with bulldogs. He’s probably a dog that 90% of the fraternity has never heard of, but of the 10% that have, I’m sure they will all say the same as me.

Now before I even say this dog’s name, I’d like to let the readers know that I have seen some very notorious dogs in some first class matches. Some of those dogs were: Ch. Jocko, Ch. Argo, Gr. Ch. John Boy, Ch. Toro, Gr. Ch. Cherokee Chief, Gr. Ch. Bumper, Ch. Red Lady, Gr. Ch. Midnight, Gr. Ch. Tornado and many, many more. So when I say this dog was a great one, I’m putting him in a category higher than most of the ones I’ve named.

Okay, enough suspense. This super dog I’m speaking of was McClam s Ch. Lucifer. He was bred by Clifton McClain, a green beret army sergeant from Fort Bragg, North Caroli­na. Lucifer’s sire was George’s Tripple Ott Red out of a line bred Loposay’s Boe bred bitch (Bilbo’s Lady Black Hawk). Lucifer has to be one of the gamest, hardest biting nose and face dogs to ever live.

His first match was against Marvin Cum­ming’s 2x winner Turbo, also a Red Boy bred dog. The match went 1:40 but Turbo was re‑ally whipped long before that. It’s just that Turbo was so game. When the match was finally over, Turbo’s entire head looked like it had been stuck into a meat grinder. Trust me, it was a nasty mess. Needless to say, Turbo didn’t make it.

For his second match, Lucifer went up in weight from 45 lbs. (his natural weight) to 47 lbs. against Lowery’s Black Sam. When they were released Sam went straight to Lucifer’s stifle biting extremely hard. Immediately, the “Polk berry juice” started flowing from Lucifer’s back end. But Sam didn’t get to stay there long enough to take him out. Lucifer found his spot right on the tip of the nose and plucked Sam out of his back end. And you guessed it, Sam never made it back there again. At about the :15 minute mark Lucifer bit completely through Sam’s muzzle. The hole was so big, it had Sam spouting juice like a whale spouts water. At the :27 mark, Sam was silenced.

Lucifer’s third match was really built up to be the classic match. He was matched into what was suppose to be the best 45 lbs. dog in the area. And that’s saying a lot considering that area has to have one of the highest bulldog populations of any area in the country. The dog Lucifer was matched into was Locklear’s Ch. Elvis. He was an absolutely beautiful black dog sired by Ch. Paladin out of a double Red Boy bitch. He had silenced all three of his previous opponents. It was to be a 2-match show that morning. I was matched into the Locklear boys also at 44 lbs. They also used a son of Paladin on me that morning, which turned out to be a super match in its on right. We went tooth and nail for 1:15, no turns, no out of holds. My Jack dog finally silenced their dog called Ace, but not before having his right leg and left foot broke.