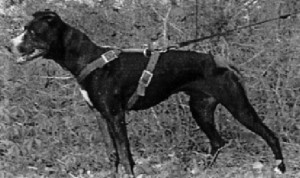 Sable came from a breeding that took place when Triangle Gang’s Dixie 2xw was bred to Gr Ch Black Jack. Dixie was bred by Bo Rookie. She got to a slow start in her campaign, and was about three years old before she was ever rolled. That first roll was her only roll. She was rolled into a much bigger gyp and couldn’t do much more than stay alive, but the more she fell behind the madder she got and in spite of getting whipped by a bigger gyp she ran a dam hard courtesy. The roll only lasted for about 15 mins, but Dixie proved she was a damn game gyp.

Dixie won her first show over a good game gyp that the TN Dog Pound came with and it was over in 16 mins. For number 2 she was hooked into A. White’s Cocoa bitch and put her away in 40 mins. Dixie was entered in a third show when she was pushing six years old and the other side forfeited.
After that Triangle Gang took Dixie to the yard of Mr. Crenshaw and bred Black Jack to Dixie, that litter produced Ch. Sable and Ch. Stretch. The breeding was essentially a cross of some of Crenshaw’s best blood with Midnight Cowboy.
Sable was a 3xw in the Deep South all under 26 mins. Triangle Gang knew from an early age that Sable was going to be one hell of a gyp. No gyp could stay with her for long in her rolls so that’s when Triangle Gang knew it was time for her to be campaigned. Sable was just like her mom she would go across like a rocket and had a hard mouth that’s why no bitch could stay with her and she was fast as hell with that mouth of hers. After a few dog-men saw her she became the talk of the Deep South and the one gyp that everyone wanted to beat.
So the call went out and Sable’s weight was put out and she was open to the world. So the time came and Two Bit Kennels stepped up with their gyp called Faith. Well that one Sable put her away in only 13 mins which made Sable a 1xw, and from there it was on and popping. Mr. Kelly told me that she was one of the best females around and that he loved Sable. Once Sable was on a dog it was all over for that one if you know what I mean…LOL.
Now it was time for number 2 and Sable was hooked into F.D.K’s Sweetie @ 41. Sweet­ie was taken out in 23 mins and Sable nev­er looked back. She was now a 2xw and on the hunt to make Champion. Triangle Gang looked for the best the South had to offer and Krome Kennel’s came knocking with their Lola bitch.
This one was going to be the one to stop Sable in her tracks. Yeah Okay, after it was said and done Sable was now Champion Sable. Sable stopped Lola in 26 mins and now Sable was the baddest gyp in the Deep South.
So Sable did her thing from 40 to 41. Sable was left as a 3xw because she was just too old to keep campaigning. That’s when Triangle Gang began to use her as a brood gyp. I always ask Triangle Gang about her and the old man tells me, “Miguel all I have to say is that she was one hell of a dog. My best bitch ever.” Sable went on to produce some bad ass dogs. Everyone that I talk with that still have her offspring say they won’t let anything of of them leave their yard. Sable has produced 3 2xers and a host of other winning dogs as well as great brood stock. We have a son of of Sable that is one bad mofo and will be campaigned soon. His name is Sam Sam and he is just like his mom. We also have a gyp of of her name Diva that is a 2xw OTC, she is our brood gyp and she is on fire. In a nut shell Sable was a dog that all she ever wanted was to get the job done and that she did. Diva will be the one to keep Sable’s name going for years to come. Sable is in the SDJ book of Champions 2004 and that’s the only picture we have of her. Mr. Kelly took that pic for the old man and it’s the only one like I said of her that’s around. Sable was the type of gyp that every dogman wishes they can have. Sable had it all she was a Champion and she could produce. Some people might have something {bad} to say about her but you know how it is…Hi haters. I myself will be having a gyp come to me off of Sable to Black Jack she will be one of my brood gyps once we get her back.
As for myself I will always carry on the name Triangle Gang. We can’t forget about Ch. Stretch that’s Sable’s litter mate brother he has also done well for the Triangle Gang. I would like to take this time and say thank you to Triangle Gang for giving me my first dog when I moved from N.Y. to the Deep South and
for being a father to me; thanks Pat.
http://www.apbt.online-pedigrees.com/modules.php?name=Public&file=printPedigree&dog_id=365695