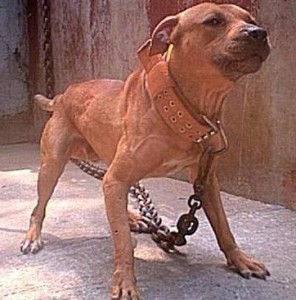 CH. Urban Wardog Kennel’s RECCA was bred by JA himself. He was sired by Arce’s TROUBLE, a direct son of Garner’s FRISCO ROM, and his dam was Arce’s ANNIE, who was a tight GRCH Coy’s BANJO ROM bitch. EO of UWK purchased the dog directly from JA as an eleven-month old pup and waited till the dog was fifteen months before his first bump against a much larger and older dog. RECCA was again rolled after three months with a dog of the same weight then later he was brought by EO’s brother to a friend’s place to be rolled two more times. The first was against another dog which was two pounds heavier and the second was with a dog that was four pounds heavier this time. When EO asked how RECCA was in the pit and was told that he displayed impressive defensive skills aside from straight offense, EO decided to open RECCA’s weight at 36 lbs.

RECCA’s first challenge came by way of JFK’s RADICAL 1xW. At that time RADIC’s littermate CH. DGK’s PEDI 6xW, 2xL, was just making waves in the circuit and another littermate, Ragtag’s (JFK’s) GREMLIN showed incredible gameness against Deep South’s TOMBOY. RADICAL would surely be a tough challenge for the first-timer. Both dogs made weight and immediately began swapping holds. RECCA, who was then 2 years and months old, eventually managed a solid hold on RADICAL’s neck, but the older and much experienced dog was able to shake it loose and ride RECCA with an ear hold then both dogs began swapping it out again. RADICAL kept on pushing but RECCA changed tactics and played it smart by staying out of trouble then went for solid holds at RADICAL’s neck and front end when even RECCA felt the latter grow weaker. By the 15 minute mark, RADICAL was down and was able to pull down RECCA and took him by the neck then by the ear then got up to continue swapping holds. As the swapping commenced, RECCA took RADICAL by the muzzle and popped a bleeder. The continuous blood flow weakened RADICAL and was down by the half hour mark while RECCA continued to punish his opponent’s front end, muzzle and neck. The first out of hold count was completed at 0:32, with RADICAL to scratch. RADICAL took a few steps from his corner and his owner called a stop to the match, making RECCA a 1xW. RECCA then made a nice courtesy.

RECCA was given by EO a year off before he was contracted to go against a dog gunning for his championship, PSK’s UNO 2xW. The contracted weight was again 36 lbs and it was war when the two gladiators met in the pit upon release. The crowd in attendance exchanged jeers and cheers as both dogs refused to give up an inch and swapped vicious holds with one another with no signs of stopping. But at 0:33, RECCA was able to pin UNO to the carpet and punish his neck, front end and stifle. Whenever UNO tried to get up, RECCA would pin him back down by punishing the front end once more or with an ear hold. UNO tried to show resilience and was able to get back up on all fours by the 0:54 mark but was immediately put down seconds later by RECCA. Two minutes later, RECCA lets go of his hold, but the out of hold count was never completed as EO would just let his dog rest for a few seconds and send him back again. The out of hold count was only completed when the clock hit 1:03 and the scratching began with UNO first to go. But upon release, UNO refused to budge from his corner. RECCA on the other hand shot out of his own corner and became a 2xW.

With two impressive wins in the bag, the next obvious step for EO and RECCA was a shot at the championship. UWK found Crossroad’s BIG MAC 1xW a willing opponent and the match was again set at 36 lbs. On the match date, RECCA, who was by then three years and nine months old, came in two pounds below the contracted weight. Still, the weight difference did not seem to deter RECCA as upon release he showed more intensity and better focus. Upon release, RECCA shot for his opponent’s stifle and immediately put BIG MAC down. RECCA then changed tactics by taking vicious shots at BIG MAC’s front end then worked his way to BIG MAC’s head and muzzle. RECCA kept the pressure on. Whenever BIG MAC would try to retaliate, RECCA would move out of harm’s way while at the same time looking for an opening to continue the punishment. In just twelve minutes, both of BIG MAC’s frontend had swollen profusely and kept on bleeding. By the quarter hour mark, BIG MAC was obviously out classed as RECCA never gave him leave to get up while the punishment continued. By 0:17, BIG MAC was picked up and gave a courtesy scratch while RECCA was crowned a champion.
-DCA “The contents herein are purely fictional and are for entertainment purposes only.”
http://www.apbt.online-pedigrees.com/modules.php?name=Public&file=printPedigree&dog_id=166759