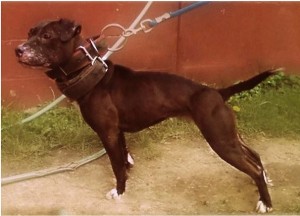 MAMA was whelped from a breeding of Kinfolk’s CH Sig & Kinfolk and Blackrain’s Taz. CH Sig was basically a Eli/Snooty/Bolio bred dog coming from T. Garner’s stock and Taz was a Eli/Carver gyp by way of a Buster/Midnight Cowboy/McCool’s breeding from some boys from Indiana. CH Sig was a extremely game and talented dog in his own right. He had beating 3 good camp’s in times of 1:01, 2:10 & 1:25. Taz however I didn’t know much about but what Blackrain had told me about her littermates being good dogs…so I bred her to my CH Sig dog on the info that was giving to me. Later down the road once the pups were born and weaned I took a few looks at Taz and she showed to be rough, hard-mouth and showed she would try to finish one. I tried hooking her but no one picked up the weight so I attempted to game check her with a Jeep/rascal/rb gyp I aquired from Jim of (MWC). Unfor­tunately for Taz she didnt make the cut. She packed it in :45. So, at this point I’m scratching my head…think­ing about how I have pups off of a gyp that has quit. I eventually gave 4 pups to Blackrain and sold 1 keeping only Mama as my pick of the litter caused I was digusted about breeding CH Sig to this bitch.

Mama was destined to be a great one from the beginning. She had started when she was about 4 months old. I litterally had to feed her with a seperate pan from her siblings casue she would go into hold RIGHT

now. As she matured to about 18 months her schooling started. We rolled her with several bigger dogs ranging from 6-10lbs bigger than her giving her every reason to quit but she never did. There was a time we bumped her with a belly full of food and I told her, “Imma give you 15 minutes to wreck this bitch and if u do ANYTHING flaky your ass is gonna be worm food.” Upon release she hit this gyp in the left shoulder crippling her instantly, then to the right shoulder doing severe damage to it. Everyone was amazed at the damage Mama had done in the such short time. After about a few months of healing and maturing to the ripe age of 28 months I decided to try her OTC to see if she was worth a bet. I did her OTC with Penitentiary Knls. Passion (1xw) which was a face chewing Werdo/Nigerino bred gyp. Passion comes in 38.5 and mame comes in 38lbs. Mama destroys this gyp in the stifle and has Passion piss­ing looking for the wall in :24. This :24 has been the longest Mama has ever seen. I was thinking to myself is this bitch really this good, so I called her weight out at 36lbs.

DNK of Chicago was calling around looking for a race for their (2xw) Tiny @36lbs. We answered the call with Mama. It was said that Tiny has killed both of her opponents in :30 and that we didn’t stand a snowballs chance in hell of out running her. The weight and date was set. We had ex­actly 6 weeks to get Mama in tip top shape for this killing bitch Everything went according to plan. Mama’s keep went great. We had to travel to Tiny’s backyard literally for this one. April 25th, 09’ rolls around and its SHOW-TIME!! Dogs are weighed and both come right on 36lbs. They are washed and pitted. Duke Wayne does the honors. Face your dogs the ref says, Release!!!. Mama comes out with her famous shot to the left shoulder hurt­ing Tiny early. Its a back and forth war for :35mins when Mama sneaks to the rear end and hurts Tiny bad back there. Tiny is trying deseparately to get Mama out when Mama attacks Tiny’s right shoulder. Mama now has Tiny on 3 flat tires but Tiny is far from done. This has got to be one of the GAMEST bitches I’ve ever laid my eyes on. Mama is working on a down dog when an out of holds is called at 1:28. A handle is made to start the scratching. Tiny to scratch 1st. Tiny is release…she take 2 steps falls down..gets up and makes a game ass scracth. Mama scratches like a ROCKET her time up. Mama is drag­ging Tiny around by the tip of her nose all the while wagging her tail trying to please me. A quick handle is made with Tiny to go again. Face your dogs the ref yells, SCRATCH on the Tiny. Tiny completes yet another game fall‑ing down scratch to everyone’s disbe­lief. At this point I’m trying to convince DNK to pick up their GAME gyp. They told me we have a yard full of these and my reply to that was, “I have a yard full of these black monsters.” At about 1:41 another good handle is made and Tiny to scratch again. This bitch is lifeless in the corner but when face and released takes a step falls down gets up falls back down get up and complete was has got to be the GAMEST SCRATCH EVER in my opin­ion. I make a quick handle to get the scratch off Mama and she comes like a freight train. DNK makes a great handle from the bottom trying to keep Tiny from suffering anymore dam­age. Ref calls for sponges in…we’re sponging our hounds mouth and un­der belly down. Sponges out the ref yells. The ref yells face your dogs as he’s counting 25, 26, 27, 28, 29, 30. Tiny to go…RELEASE the ref screams. Tiny is release but crumblings over in the coner lifeless. She is counted out making Mama a (1XW) in 1:52. I asked for a courtesy scratch and Mama is going ape shit for me to release her. She courtesy scratches HARD!!! My hat goes off to Tiny (2XW-1XGL) cause this gyp was the EPITOME of what a game dog is!!!

After Mama won her 1st it was al­most a year to the date I hooked her for her 2nd. I wanted to concentrate on some other things I wanted to get accomplished but the game was call­ing me back. I made a few calls to 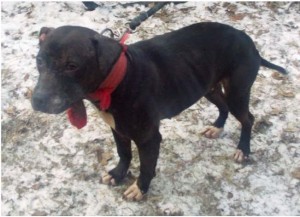 some dogmen and heard GRK ( Sling­shot Knls. former partner) had a 2XW off Stizo’s CH Mafia x CH Stella (POR). The date and weight was set. This time we had 2 hounds on the card. The keeps went superb!!!! We had Sigmata hooked @ 43lbs and Mama @36.5lbs. March 20, 2010 rolls around and its SHOWTIME once again. We meet at a nuetruel venue to have this party. First up is Sigmata. He wins in 1:04 making him a (2xw). Mama is up next. While I’m out trying to get her to dump out she sees a white bag fly across her face and goes nuts trying to get at it. I’m thinking to myself this bitch is ready. I finally get her calmed down enough to take a dump and a piss. We weigh up and Mama is 36lbs 11ozs. GRK takes the forfiet and wants to goe home. We re-negotiate a new contract where I give them odds for 3 fucking ozs. After about 10 mins of this back and forth bickering we finally get down to business. Dogs are washed and pitted. Stizo does the honors. Mama comes out hits Hollywood (2xw) in the left shoulder and its purple blood everywhere. Hollywood tries to peel Mama out but Mama quickly goes to the rear and hits another bleeder in her left stifle when suddenly lets a cry for help. Mama senses the end is near and jumps deep in Hollywood’s throat where she FINISHED her on the floor making Mama a 2XW in :28

Mama is now a 2xw and we’re searching high and low for the bad­dest gyp at that weight. We tried to get at LDK’s CH Icepick but she was retired. There was some talk about a gyp named CH Baby Grand but I could never get with her owners so we called to the Eastcoast to see what was shaking over there. POW Kennels answered the call with there gyp of CH Odog x Sundown named Judy Judy which is heavy Termite/Gr CH Lukane bred. For­fiets are put up and a date is set. These 8 weeks fly by and we’re off the POW’s backyard in Maryland. We get there a day early to make sure Mama is properly rested and ready for whatever is put in front of her. Sat Dec 11, 2010 rolls around and its SHOWTIME. Its a cold winter night and we agree not to wash. Dogs are tasted, weighed then pitted. Mama comes out with her patented left shoulder hold and hurts Judy early but this young bitch isn’t having it. They swap it out for :30 when Mama goes up top like her sire CH Sig. Mama rides the nose which has Judy squealing and protesting. The ref said if she keeps that up yall are going to have to start scratch­ing them. I had no problem with that since I felt Judy had enough. Its Judy to scratch and Mama meets her in the middle. Mama is puoring it on in the shoulders and throat when Judy starts to sing again. POW has seen enough and asked if I would scratch to WIN. I happily ablige them. Mama scracthes to WIN at :51 making her CH Sig’ 2nd CHAMPION. I WOULD LIKE TO SAY CH MAMA IS A TRUE FASTLANE CHAMPION TRAVELING ALL 3 TIMES TO PREVAIL!!!