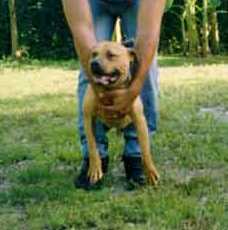 I received Jumping Jack Flash at the age of eight weeks old. I bought him along with 17 other dogs off of the Latin Boys. When I went to pick up the dogs, I saw Jumping Jack in a small rabbit cage all by himself. Of course that was not his name yet, but it was soon to be. He got his name, because he would not stop jumping around the cage. From that moment on I knew he was going to be a special little dog.

I started schooling Jumping Jack Flash at a very early age. By the time he was eighteen months old he had past all his tests with flying colors. He had the misfortune of being a small dog, becuase of this he always had to be rolled against a larger dog. But, he always came out on top. He was a true Game Bulldog. At the age of 19 months old I took him out for his first match which turned out to be his hardest match of all. His first match was into Gusto Boys’ Hanable, which is a son off of Gr Ch Bronson. This fight went on for an hour and 39 minutes. Hanable, went toe to toe until he was picked up, and declared dead.

His third match was into The Jersy Boys’ Little Bumphus. This was supposed to be a real good match, but it turned out to be his easiest match. Jumping Jack Flash came out buried himself in Bumphus’ chest, and it was over in :26 minutes.

Well, all I can say for ourselves, The Havana Boys, is that we were the proud owners of Jumping Jack Flash.
~ Havana Boys