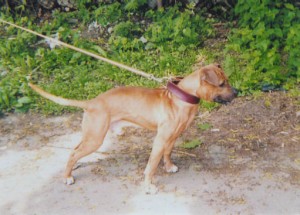 The story of how GR CH PISTOL came about is as exciting as the dog was himself. Louis Hernandez bred NIGHT CAP, a double-bred daughter of GR CH ANDY CAPP, to MURPHY, a son of Jose’s GR CH BULL, to create this amazing animal. Bean Town Kennels acquired the dog as a young pup, and for reasons unknown to myself, they gave GR CH PISTOL to F.M.K. at the tender age of 18 months old.

Talawa Lion and F.M.K. then went out to take a look at this new addition to their kennel. They looked at him against an inbred LANKY HANKY dog, that was 15 pounds bigger, and he showed real potential. At the 1/2 hour mark PISTOL showed that he was definitely a fan of the attention he was receiving, and was screaming like a wild animal when he was being led away from the show ring! Everyone in attendance could see that he had the body to win and the drive to get the job done!

His second trial was to be directly compared to a good son of HAVOC, a litter-mate sister of Jersey Boy’s CH SARGE. They were looked at for nearly 45 minutes, and PISTOL was better than him in every aspect that there was. He had better corners, and was faster, stronger, and wanted to be a winner! The people that were in attendance knew that he was something really special, and was destined for greatness. “There are times when we see a very unique dog, and we don’t need to see a lot out of him to know he will be one of the greats”.

He was hooked into El Solo & Ming Man’s MIGHTY JOE YOUNG, and this was to be the hardest test of his career. For nearly two hours it was nip and tuck, and no one was for certain who would be declared the winner. F.M.K. called on PISTOL to really show his best side, and at the 2-hour mark, the other side decided that they had enough. Going against a dog like PISTOL can make or break a dog’s career as a show dog, and in this case it was a career ender!

Cull Hard Kennels decided that they had one for PISTOL, and it was set that MAD DOGG was to be just that one! Well, they guessed wrong, and in just under an hour MAD DOGG called it quits. PISTOL was his arrogant self, and was screaming dog obscenities!

Lockjaw Kennels was to be next, with their dog ELLIS. Once again, this was supposed to be the dog that was tailor-made to defeat PISTOL, but he was to be the easiest for PISTOL to defeat! PISTOL ran circle around him, and it was evident from the start that it was going to be a landslide victory for PISTOL. Enough was enough, and at the 47-minute mark it was finally halted, and PISTOL was now CH PISTOL!

The legendary Big Apple next challenged CH PISTOL, and he swore that his TWIST dog was going to get the job done. It was back and forth for the first part of the show, but by the 45-minute mark it was evident that CH PISTOL was the better of the two dogs. It was apparent to all that TWIST was indeed a fine specimen of bulldog, but not enough to defeat CH. PISTOL. At just over an hour the crowd saw what true greatness was, and CH PISTOL had just won a huge victory!

After some hard thought, CH PISTOL was brought out of retirement to face Hard Drive Kennel’s BOLO, a 2xw and a son of Crenshaw’s CH GATOR. This was a classic contest, and the wear and tear on CH PISTOL was easy to see. What was easier to see was the drive that he had to win at every show that he was placed in. At the one hour and five minute mark, he dug deep down inside, and showed once and for all…F.M.K.S GR CH PISTOL was the truth!