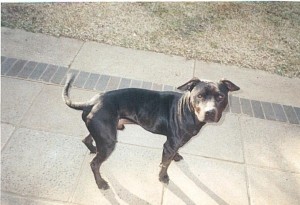 Mamba  was one of those dogs that you just had to like. This is a dog that ended his own line, due to being such a great animal. Mamba was a beautiful pitch-black dog that could have been called Midnight. He had a very happy go lucky disposition and wasn’t man aggressive, except when he neared the end of his keep. Never knew his litter-mates, except one bitch called Charleen, she was also a black dog, but she had a bit of white on the chest and face, another male a later came in contact with was his brother Spice, Spice is a White and Black dog, and he is much bigger that Mamba or Charleen. Mamba was a 24 kg dog and his sister “Charleen” is a 17,5 kg female. Funny that all would came black and or Black and white, as there Sire, Gunner is a Chocolate dog with a red nose, and there mother Billy” is a Buckskin dog with a black nose. This is the only three litter-mates that could be traced from this breeding.

The mother Billy is another story on her own but she is one hell of a producer when it comes to game dogs. Just thinking of her quickly makes me think of the breeding done to her, except for the one where she was

bred to “Gunner”; she was bred back to one of her own sons “River”. This breeding produced “Dempsey” a 1-time winner one time looser making his loss a very, very game one. Then his sister “Sherry”, lost her only match very game after she was ripped to pieces. Then there was a brother that died when he was attacked by bees. But he was game tested, en found to be a very worthy dog. The only dog to stop out of this litter was another brother called “Claw” I big brindle dog. Billy was also bred to a “Brujo” bred male called Liquorice Kid’s “Moon”. This litter resulted in only two dogs known to me. One is “Leo” who is a very game one-time winner and the other is a very small male that is a good game dog, but to small to be put in the square. The breeding where Billy was bred to Patrick’s Big Brother” better known as Bro, resulted in two extremely game and great dogs. The first one is “River” a very game dog that produces excellent game-dogs, and the other is “Bruce Lee”. “Bruce-Lee” lost his first match in a grueling 2:27 against CH “Ore”, he then won his next match, and the lost another match almost dead game. He was retired, and due to a mishap, disappeared. Billy was also bred to a son of Grand Champion “Sir Thomas”, but these dogs disappeared into dogdom. Back to “Mamba”; a very loving and caring family as a housedog raised him; he got older and as usual got into trouble. He was returned to the Liquorice Kid’s yard and as he was just over two and ready, he was tested. He was tested against a grandson of Marius’s “Kojack” called Piston”. Piston whipped him in ten minutes and the roll was stopped. He was the tested for another ten against “Kalib”. He looked better in this second test, but still not great.

After this the Liquorice Kid got hold of me to see if anything could be done with this dog.

He was picked up, and on his way to his new home, he made a stop on the Plumber’s yard, and was given another quick test against his half brother “Bruce –Lee”. The roll was tit for tat, but it was evident that Mamba was a very impatient dog. After this he was taken to the yard of the K.Club. The K. Man worked with him and looked after him, trying to groom him for the great dog he was to become. He tried to teach the dog some patience, rolling him very short rolls into much bigger dogs that would overpower him, and make him defend.His first match was to be a very interesting one, as the owners of his very first roll was looking for a match at the same weight as “Mamba’s”. The match was contacted. And the“Piston” dog was in the meantime tested very well. He was triple dogged for 15 minutes to each dog, and he came out tops each time and was labeled a very good and game enough dog.

Mamba did not have a lot of damage on him, except for a broken front toe. The only place where he was bitten just before “Piston” decided to take the highway to curdom/ this injury took a long while to heal, but once he was healed. He was ready. The owners of Piston were looking for revenge, and contracted “Mamba” again at 22 kg with a Grand Champion Sir Thomas bred male. Mamba was put through his usual keep, without any problems and when Mayday arrived he was a little under weight, as he was more a 23 kg dog that 23. I cannot remember the dog’s name, so I just gave him one of my choices.

2.K. Club’s “Mamba” vs. ??????” Tommy Lee”
Weight 22 kg
Winner; K. Club’s “Mamba” (2X)
Time: 1:12
Mamba a black weighing in at 24 kg’s his opponent a buckskin from Grand Champion Sir Thomas breeding also right on weight. Dogs are released and “Mamba” at his usual driving. The Buckskin a typical “Sir Thomas” dog. Incredible ability, and very clever; “Mamba” can not find his target as easy as usual, and at times he looks stupid, trying to byte his opponent on the back. The driving goes back and forth and it looks like “Mamba” patience lessons paid off, as he hangs on the ear when he needs to, but still cannot wait too long. At the 40- minute mark, it looks like the Buckskin is taking over the match, but “Mamba” keeps driving. Mamba still has a lot of conditioning left in him. At about 45 a funny move by the Buckskin, a turn is called on the buckskin, but not given by referee. As the match continued, his own handler then calls a turn on “Mamba”. The K. Man. It wasn’t a turn, but the scratching needed to commence.. The Buckskin dog comes to a sudden halt. It looks like all the fighting has gone from his body. A handle is made at 1:12.  Mamba  is up to scratch. But it is clear that the Buckskin had enough. The opposition gives up.