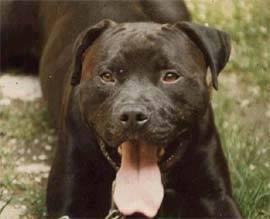 BLACK MAGIC was the first Pit Bull that arrived in the former Yugoslavia. He was born on October 8, 1984 in the yard of Ganja Kennels in Holland. Sine Leskovar brought him home to Ljubljanam Slovenia. His dam was Country Boys BLACK PEARL, a heavy gametested brood bitch, owned by Lange back then. PEARL was from heavy ELI breeding, thought Loposay’s BUSTER R.O.M. & Cummings ELI III R.O.M., with a touch of Cotton’s BULLET blood.

The sire of BLACK MAGIC was Hensen’s DANGER who was Bolio/Tombstone on the top, and pure Heinzl blood on the bottom. Nobody knows how many bitches were bred to BLACK MAGIC, probably a lot, but in his time there were not many good females around. Even so, BLACK MAGIC produced lots of good dogs and started several different bloodlines in the Balkans.

Davor Donadic from Pag had never touched his inbred brood bitch named RIA. She was a double daughter of Ljubomir’s THOR (CHICO) and he bred her 2 times with BLACK MAGIC and raised both litters. Those dogs from that breeding were the founders of a completely new bloodline, today called the “VILI” bloodline. The name comes from the best and most known dog from that breeding, Davor’s VILI R.O.M.

VILI was a tremendous 2xW at 22.5kg (49.5Ibs). He won in 35min and 13min, later VILI became a R.O.M. dog showing his producing abilities by throwing dogs of the same type and look.

As you can see, that breeding was very successful, it produced lots of match dogs and great producers. The owner of BLACK MAGIC Sine Leskovar had a friend Vedran Antesic, who had a cold but totally pure Mayfield female from Holland. Her name was BONNIE and they bred her to BLACK MAGIC. The most known dogs from that litter were Captain’s CH. THOR R.O.M., Captain’s BRITA and Ranko’s CALIGULA.

Captain from Serbia started his own line with his CH. THOR R.O.M. who showed to be worthy as a producer. When Ch. THOR 3W 1L was bred to his belly sister BRITA they produced Captain’s CH. BIMBO 3W who beat well known Alea’s TAM-TAM 2W.

There were a few more winners from that breeding. CH. THOR also produced 014’s CH. BIANCA 3W when he was bred to Nikola’s ALISA.

In 1989 Mr. Ruppe from Croatia went to Ljubljana to breed Ruppe’s ASKA (aka Corrigan’s CHACAL) to BLACK MAGIC. ASKA was a pure Giroux bred bitch, daughter of Auclair’s CH. BLACK TOM. From that litter came Rupper’s BUSTER, Ruppe’s JEEP, Slo’ KILLY 1W, T&B Kennels ART 1L.
Mr. Ruppe never matched BUSTER or JEEP, but they were extremely heavy tested several times, they were deep game dogs. When BUSTER was bred to Zinetti’s CH. AZRA they produced the 4xW Atila Kennels’ CH. FREDDY and his deadgame sister Atila Kennel’s OLIVIA 2W (1hr 50min & 2hr 36min).
Their brother, T&B Kennels ART lost game to his half brother Davor’s VILI, but ART is still the basic dog in the pedigrees of good dogs such as Gorstak Dugi’s GR. CH. COKE, Horror’s CH. DENNY and Alen’s CH. BRUNDO. Sine Leskovar died in 1990 and in April 1991 T&B Kennels from south Croatia purchased BLACK MAGIC from Sine’s widow Jelena, he was 6 years old then. They bred MAGIC constantly and inbred him too, but they didn’t want to spread that blood around. The most known breeding they did with MAGIC was when they bred him to a pure Country Boys female called T&B Kennels SHEMA.
From that breeding came VERONIKA & Damir’s FOX and T&B Kennels RABBI. FOX won his 1st in 18min and his 2nd in 45min over the well known Zinetti’s (Garner’s) FRISCO II 1W, then FOX lost his 3rd deadgame in 2hrs against Goscak’s FREDY 2W. RABBI was on eof the best bitches in the south, everybody called her the killing machine but something went wrong during her 1st keep and she lst her first match and died after. Before her death, she produced 1 litter where the “Dog Of The Year 2000” was born, it was Gorstak Dugi & Horror Kennels GR. CH. DAISY 5W.

BLACK MAGIC lived in the yard of T&B Kennels until his death, December 23, 1994. He is the dog who has had the biggest impact on our Balkan breed. He started few different bloodlines and produced few CH. & R.O.M. dogs. He was realluy one hell of a producing dog. He was never matched, but according to those who saw him in his rolls, he was a devastating hard mouthed dog. T&B Kennels said he is one of the very best they have ever seen! His genes live through his offspring which are spread around the whole country.