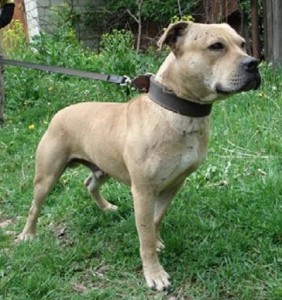 Grand Champion Lyolik was born on August 2, 2004 in Belarus. His mother, Puma, was a sister of Pit Forward’s Champion Shket. This breeding was very expensive but worth it to me. At that time I had no money, so I had to sell part of my property. But I am a true fan of the dog-sport and did not scare away from the 2300 km trip from Ukraine to Russia to Beshtau Kennels’ Grand Champion Ziro.

At the time Ziro had four convinc¬ing victories. This dog had health and mind. He could easily adapt to any opponent in a pit and make a clown out of the destroyer. I knew that Ziro’s father was the famous destroyer of Montenegro – Grand Champion Zlunja. By my calculations we were more than likely to get from this breeding; dogs that were smart, fast and that could bite.  Today I have again and again been convinced of the correctness of my choice. August 2, 2004 had five puppies – three males and two bitches. I want to mention that all these dogs were matched. After a short roll Lyolik started. His was first matched at 20 months old. It was his shortest match. He won in 40 minutes. His second match was 4 months later. His opponent was an experienced soldier – a son of Victor’s Champion Iron Kid ROM. At this time Lyolik went into the match in bad shape and was weak. But at 1 hour, 10 minutes, he became a two time winner.

The next match was the longest in his ca-reer Lyolik and lasted 4 hours. Our Rivals were from Orel Kennels, who fielded a son of Cham¬pion Charlie. This young dog Charlie Jr. was a one time winner. The battle began with furious attacks from Charlie Jr., while Lyolik worked as number two. At 1:30 he counterattacks fore¬leg and Charlie Jr. begins to limp. Since then Lyolik begins to dominate. About 3 hours later Charlie’s handler offers a draw. But I do not give consent. After 3 and half hours of fighting the situation becomes critical. I did not want to draw, but I was afraid of losing my dog since the match has no veterinarian. I handle at 3 hours 35 minutes. Lyolik flies out of the corner and hammers the opponent into the side of the ring. The match continues. At 3 hours and 58 minutes – I agreed to a draw. In this match Lyolik for 3 hours 5 minutes stayed on his feet and just after 3:45 mark lay on the floor. Sadly, Charlie Jr. died after the match. He was a high-class dog. I am sure that if he had not met with Lyolik, he would champion. But this is a game where every match could be the last.

The fourth match Lyolik fought on the big show in Orel against Daniyar and his famous Grisha. This dog was

famous for its strong bite, and received Best in Show at a show in Mos¬cow. At the start Lyolik got his favorite hold, a deep grip on the ear. Grisha tried to go to the chest, but Lyolik would not let him. The skin on Grisha’s head was being pulled down obscur¬ing his vision. After a half hour battle Lyolik at¬tacks the legs and shoulders. At 1:27 Lyolik is declared the winner. Lyolik stays Champion! Many respected dogmen saw the match and very much appreciated Lyolik. Some gave him higher marks than his father, Grand Cham¬pion Ziro. Lyolik left the contest with minimal damage and was open for the next match. An opponent is only found a year later. It was Sabonis, famous two time winner from Russia. During the preparation Lyolik injured a foreleg. I reduced the intensity of the work outs and as a result his weight went up. Dur-ing the eight days before the match Lyolik weighed 2.1 kilos more than I wanted. I want¬ed to move the match back 1 or 2 weeks, but my opponents refused. Go! Sabonis goes to the chest but at 1:10 of the match Lyolik is declared the winner.

In autumn 2010, Lyolik again went into the pit at a show in Kiev. Opponent was a two-time winner from Greece named Kitch Jr., son of the famous European destroyer Julbar’s Grand Champion Kitch.
Preparations went well. On the day of the match Lyolik was six and a half years, but I was sure he was 100%. The battle began and opponent’s dog at-tacked my dog’s face. Both dogs are working on the mouth and jaws. Lyolik loses a few teeth but this does not prevent him from increasing the pace of the fight. After an hour he begins to finish. He works hard on the legs, shoulders, armpits. At 1:40 my opponent picks up his dog. Lyolik became a Grand Champion.

Lyolik had 6 matches in three different countries. He received 5 convincing wins and 1 deep game draw after 4 hours. After #6 his fighting career ended. Today he is open only for stud. In his pedigree there are no random dogs. All of his ancestors, brothers and sisters have many times proved their quality in fights. His brothers and sisters have already shown them-selves to be good producers. Now it is time for Grand Champion Lyolik to produce. I bet he will be remembered as his children begin their match careers.