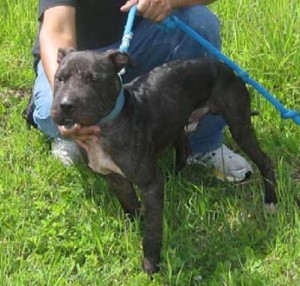 Cuko was the pick of the litter chosen by Mr. Rule Garza. He was a littermate to Gr. Ch. Cheyenne, down from Cascudo 2xw and Tatis ROM. One day Mr. Garza agrees to sell me Cuko because he had no time from being so busy with work. Before I bought him, I was told he was very restless and active but he had not been started yet. “Do you still want him?” I responded “Yes” without hesita­tion, Cuko was about 8 months old at the time.

I waited a few months before starting him, and boy did he surprise me! A crazy dog that could squeeze very hard but he didn’t know where to aim yet. After the roll with a bigger 18 month old I knew Cuko had uncanny strength that I had never witnessed before. A few weeks later Felix and El Profe Ponce came to visit and I wanted them to see Cuko in action so I gave him a little time. I asked Felix to handle Cuko and he came out like a freight train even more intensely than before. We handled them and I tell Felix to turn Cuko away and I walk far to make it a long scratch when I hear Felix say “He’s loose!!” Hahahaha. Cuko was insane and didn’t even acknowledge me since my back was turned and he couldn’t see the dog. Papirrin was chillin’ on his chain and didn’t know what hit him. Cuko runs through him at full speed and makes the loudest impact noise I’ve ever heard two hounds make. They start going at it and we break them up right away. Afterwards Cuko was going crazy in his crate like a scene from the Exorcist and we discovered that he was an escape artist and could climb any wall or fence.

A short time later Cuko developed an ab­scess below his jaw unrelated to his school­ing, so I took him to the

vet. The vet told me it was his glands and he would have to operate so I gave the OK. At first they could not se­date Cuko or put him under like a normal dog but when they finally did and cut him open bright red blood came out and it coagulated instantly. So I told the vet, “Ah see? He’s in great shape!” After the surgery he began his recovery and to my surprise he started going downhill fast. I didn’t understand how, and much less why so I took him to the vet once again and he tells me he has cancer of the lymph nodes. What? That’s not possible; this is the strongest S.O.B I have ever touched. Cuko was a bag of bones on death’s door and all the vets say is that they can’t do anything for him. So I give him the Blackrocks’cocktail and somehow hit the bull’s-eye with this treat­ment. The next day Cuko started eating again and began his recovery, he wanted to live.  After that illness Cuko was never the strong freak of nature he once was so I de­cided to rest him for more than a year with no action. One day kennel member Trompas comes to visit and he says he wants to see Cuko go, so we put the other crazy S.O.B on the yard, T-Lac on him. Cuko goes straight for the hind quarters and T-Lac feels the power and grabs him by the muzzle. We break them up right away and let Cuko scratch, and Trom­pas is amazed but I tell him he is no longer a match dog and leave it at that.

A few weeks later Trompas was joking around with STW Kennel and somehow they ended up hooked at 19 kg. So he calls me and says he hooked Cuko! I tell him I couldn’t do it. During that moment in time, the war in our area of the country was at full tilt and one couldn’t travel to Tamaulipas without going through a war zone. But I agreed to condi­tion him as long as he would take him to the event from our yard on the same day as the show. We begin to work Cuko and he has tre­mendous air with a passion to work. On the day of the show, my friend Mr. Guerrero takes Cuko to the convention about 5 hours away. He was excited to handle Cuko since he along with the Garza brothers once had his sire Cas­cudo. Cuco makes weight. His rival was STW’s Johnny Red, a good one down from Macho-buck blood who was very intense and super intelligent. When Cuko arrives in the square Mr. Cardenas is impressed by his physique and says he has been worked well. Dogs are released and Johnny starts fast but once Cuko gets his turn he hits very hard to the chest, shoulders and kidneys. Johnny Red scratches once and on the second he stands the line. Cuko made him protest and it only took 28 min to stop Johnny. Cuko was now a 1xw.

I decide to rest him for a few months and I tell myself that he has proved himself and would retire him. A while later we were hooked in Mexico City at 19.5 kg for Ch. Zorro’s 4th. They had told me we were

facing a good Ch. called Fantasma down from PIK Ch. Bo Jack blood on top and BBB’s Gr. Ch. Spikey-Big Red blood on the bottom. Half way through the keep, Zorro loses his next to last hanger and injures his mouth. Cuko would take his place with only 4 weeks left. The day of the show arrives and Ch. Fantasma looks excel­lent, well conditioned and bigger than Cuko. Cuko was strong but the altitude being higher than Denver had an effect on him and he was not 100%. Fantasma likes the face but when Cuko hits his spots, WOW! Very few animals like him. Cuko punished him very hard and af­ter 6 scratches each Fantasma was picked up when Cuko was finishing him in the throat at the hour mark. Cuko was now a 2xw. Cuko stayed in Mexico City to heal at our friends Mr. Magana. Atown was staying at Magana’s to condition Gr. Ch. Sam Jr. for his 6th in Europe. And what a fabulous place for a keep it was. Great altitude and the ranch had a beautiful view of the Popocatepetl Vol­cano and its white snow caps. Atown hooks 4 weights vs. Munoz Kennels, a very active fast lane team that wins most times. 2 of the weights were Cuko and Candy going for her Gr. Ch., the other 2 were Comanche and another CML dog both going for their 1st. I tell Atown, since the show is way up there in the mountains, it would be best if he works them at altitude, and he agreed.

The day of the show arrives and they had brought a Cardenas dog called Chato who was supposed to have a freak mouth. On that day Cuco looked like when he was a young dog, he had finally got all his strength back and Atown did an excellent job. Dogs are released and right away Cuko gets in the chest viciously and opens up a severe faucet leak. The rival was hurt and he was slowing down all the time and Cuko goes to the throat, but once he decides to hit the kidneys it’s all over. They picked him up almost RIP. In a phenomenal display he be­came Ch. Blackrocks’Cuko 3xw.  Atown then takes Cuko with him close by to Puebla with the Santand­er’s. I get a call from him and he tells me Cuko escaped and climbed over a fence and killed a sheep. No way! That was the 2nd time he had killed one, the 1st time one got into the yard and he literally ate all of the insides and left only the hide, he was loco. On 2 occasions he had climbed the wall to the other side with his chain and we would rescue him and per­form CPR to revive him, so we kept changing his setup and location. I was about to hook him for Baja when they tell us that we aren’t going into Poli from Rosarito Ken­nels since his dog won’t make the weight. The next week Cuko some­how dislodged his house and it land­ed vertically where he climbed it and went over the wall once again. This time we arrived too late and Cuko could not be revived. This is how the story ends about a dog that I thought we would never match, and he gifted me a championship, a tremendous animal. Now he rests in peace next to other great warriors in the ground at Blackrocks Kennels yard.

This article is dedicated to “El Blackrocks Trompas”. He was an excel­lent friend and team member with a gift to make people laugh that very few possess. Thank you, brother for sharing your contagious joy and wit with us. Y donde sea que estés, se que estas apoyándonos. Con la camiseta bien puesta.
http://www.apbt.online-pedigrees.com/modules.php?name=Public&file=printPedigree&dog_id=341007