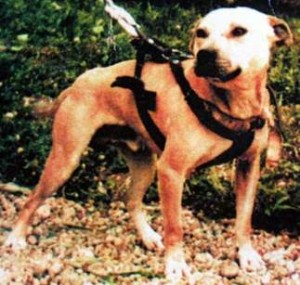 Boogie was an early starter and his schooling started at a young age, he showed to be a very talented match dog. He won his first match for his owners in only 3 mins, si­lencing his opponent Zoran’s CRNI with one single hold. Right after that he was sold to Bingo Kennels where he continued his matching career. His 2nd match was into Smesko’s BLEKI who was belly brother to Putina’s CH. GIROUX JR. 4W. That was the toughest match for BOOGIE BOY, he couldn’t make a single hold for the first half hour and suffered lots of damage on his head. But after 40 mins he finally hit the belly and pri­vate parts of BLEKI and it was all over fast. BLEKI was history at 42 min mark. BOOGIE BOY needed long recovery af­ter that match.

After some time of rest, he was contracted for his Championship match against Muggy Line’ MUSA 2x winner, who had reputation of brutal chest dog. BOOGIE BOY beat him in 49 min and became Champion. MUSA re­covered after and won one match after and became Champion as well.

His 4th and easiest match was against Novo Selo’s CH. KID 4W at 15,5 kg. Match was in May, 1999. CH.KID won in long matches, but he couldn’t do nothing to stop CH.BOOGIE BOY and KID was picked up after 32 mins.

Now BOY was a 4x winner and Bingo Kennels wanted to match him against the best at his weight and he finds Mickey’s GR. CH. MALI CEDA,who accepted his challenge and took his re­tired warrior once more into the ring. It was a great match, fast start for both where they showed that they were very talented fighters. It was stifle to stifle, very fast pace and lots of good action. Both dogs scratched fast 2 times, but it was BOOGIE BOY who was more fresh to finish and had more strength. At the 42 min mark it was obviously that MALI CEDA couldn’t keep up and Mickey picked up his warrior wisely. Both dogs ran their courtesy scratches, but MALI CHEDA lost his Grand Championship title and gived it to the younger BOOGIE BOY. It was a really spectacular match and everybody was pleased to be there. After that match GR. CH. BOOGIE BOY was retired for breeding purposes at the yard of Bingo Kennels where he live untill today and still siring pups. So far he produced several winners, he was matched between 14,8 – 16 kg ( 32,5 – 35,2 lbs).