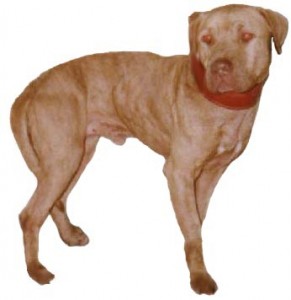 His first match was at the age of two and a half against Tension Turf Kennels from ST. Croix. and their dog David Koresh (a half brother to the famous Gr. Ch. IBM) battled with Yellow Buck for 1:05 and was picked up game. For his second match he went into Dennis and Hector’s Brick at 52lbs. Yellow Buck finished Brick right in the pit with only one hold, deep in the stifle. That match only lasted seven minutes, Dennis and Hector picked Brick up, but it was too late.

From there on he never looked back. For his championship Jessie had to look off Puerto Rico for another opponent, because noone wanted any parts of Destroyer. Death Row Kennels answered the call with their 2X winner Predator, so Stone City and Co. traveled to South Jersey for this match. This proved to be Yellow Buck’s toughest match and he wasn’t supposed to come home alive. The dogs swapped it out for about :45 until Death Row decided to pick up Predator, thus making Yellow Buck a champion.

After about a year off with no takers, some dogmen from Florida stepped up with Bulldog P.’s Tere, a 1X winner out of Havana Boys’ Sandal and Rebel Kennels’ Gr. Ch. Shady Lady. They Flew down to Puerto Rico, but Yellow But was on the warpath and he made Tere stand the line at :27.

For his fifth, they hooked up with Work Kennels and their dog Buster, also a 4X winner. Work Kennels also flew down to Puerto Rico and after 1:30, they picked up Buster making Yellow Buck an official Grand Champion.

He was the second Gr. Ch. to come from the yard of Stone City Kennels out of Awesome Baby.