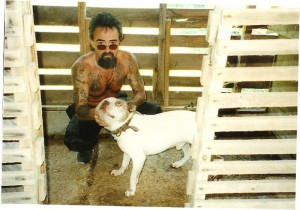 Q: WHO OR WHAT GOT YOU INTO THE DOGS?

I was in Elementary School, 5th Grade, approximately 10 years old and a friend of mine brought a magazine which had an expose on dog fighting in Mexico. I was quite intrigued and knew that I had to have one of these dogs. I found one when I was in High School. My dad took me to buy my first dog. Being an avid Boxing fan, and dog enthusiast, our breed seemed like a natural transition.

Q: THE NAME FRANK ROCCA SEEMS SYNONYMOUS WITH THE OLD HETERICK DOGS, YOU HAD SOME SUCCESS WITH THESE ALSO, WHAT WERE THEY LIKE AND WHAT MADE THEM GOOD?

The old Heterick dogs were line bred on the “Old Family” dogs, old Colby and Lightner strains from the original imports. William J. Lightner was the most successful breeder and matcher in history, in my opinion. The Heterick dogs had a good heavy dose of the Komosinski strain, which were Colby dogs. These were the dogs of what seemed to be the base of the other good bloodlines back then and they were in my area and easily accessible to me. Blair Heterick was already out of the game at the time but these dogs were still scattered around Pennsylvania and Ohio. The thing that I liked about them was they were very game dogs, agile too, and they seemed to make excellent outcrosses.

Q: ONE OF YOUR TOP STUD DOGS IS “ROCCA’S STONEWALL”, WHAT ATTRACTED YOU TO HIM, WAS IT THE BREEDING (HONEYBUNCH) OR WAS IT THE DOG AS AN INDIVIDUAL AND HOW WOLD YOU RATE HIM IN COMPARISON TO OTHER STUDS YOU HAVE OWNED?

There really is no comparison with “Stonewall: and any other dogs that I have owned, because he’s far superior in terms of being a producer, and as good as the best performers I have had. His pedigree is second to none. The sad part is he’s eleven years old and his days are limited. We didn’t start breeding him until he was six, which explains why there are not many “Stonewall” dogs around, the other reason is I pulled him off of Public Stud a couple of years ago and I turned down some very nice offers to excellent bitches, tidy sums of money, and half litter deals, but I just wanted to keep him in my own yard and breed him selectively to my own bitches. I tried to pay a handsome stud fee to his previous owners, hoping to get him bred to my “Midge”. A couple years later I purchased him, made that breeding twice, and realized some of the best of my career in terms of the trickiness of breeding for gameness.

Q: WHAT IS YOUR CRITERIA WHEN SELECTING A BROOD DOG OR BITCH?

The easiest thing would be to know if the dog had produced successfully before. If it’s a younger dog then the thing that makes the most sense to me is to look for a dog that is saturated with game dogs in the first three generations, most importantly the first two generations. The parents and grandparents must be sound for the individual to be sound also, you can get flyers out of litters from slip shod breedings, but more than likely they won’t be able to reproduce because of what’s behind them. All things being in perspective that suit my needs, the individual in question must be nothing short of my long term objective.

Q: WHAT IS YOUR CRITERIA WHEN SELECTING A MATCH DOG OR BITCH?

Selecting a match dog or bitch wouldn’t be any different from selecting a brood dog or bitch. Usually my first priority would be gameness naturally or I wouldn’t be into game dogs. The next thing would be ability. Ability would be compromised of a few things, wind, wrestling ability, bite, agility and temperament would be right up there also because if you cannot handle your performance dog you will have problems. Mental and physical stress tolerances are also imperative. Many a great match was won by a dog of above average ability, but huge of heart and brain, over and opponent that by all logical, physical standards should have won.

Q: YOUR BOOKS ARE WRITTEN IN A DIFFERENT STYLE THAN MOST AMERICAN PIT BULL TERRIER BOOKS, SHORT STORIES, POEMS AND SKETCHES. WHY DID YOU WANT TO BREAK FROM THE NORM IN WRITING THESE BOOKS?

For one thing some of the books are repetitious; some of the magazines and books are in a way boring. I think what needs to be done with the dogs is there needs to be a broader spectrum which also entails the writing and reading material. It’s a very versatile dog, it can’t be summed up by reading about how to raise and train your Yorkshire Terrier. There is much more about the American Pit Bull Terrier than any other breed of dog. Granted they are just a dog, but it is a very specialized breed also and that must be taken into consideration and on top of that, I tried to make the books a little more interesting by adding things that aren’t found everywhere else. These things are probably interesting to some people and other people probably find them ridiculous. But I can’t please everyone, I can only please myself and hopefully other people will like them.

Q: WILL THERE BE A THIRD AND IF YOU WILL YOU CHANGE YOUR NAME TO RICHARD STRATTON?

I have already changed my name to Richard “Bullyson” Stratton, my alias is Frank Rocca.

Q: WHAT IS THE BEST OR THE GAMEST DOG YOU HAVE SEEN?

The best all round dog that I have seen would be Red’s Ch. Red Dog R.O.M. He was very amicable with strangers, anyone could steal this dog, he had no enemies. He was even friendly towards other dogs unless he was in the pit. He was one of the best producing dogs I have ever seen. He was a destroyer while in the pit, a fast finisher. When he got into another “Ace” caliber dog, I saw him go 3:18 and he proved to be dead game.
The best that I have ever bred was out of my “Cherry Bomb” bred to “Gr.Ch. Zebo R.O.M”. I got a dog called “Bobo”. I’ve had dogs that were close to him in ability that I bred but, I would still have to say he was the best. The best competition bitch that I owned was “Cherry Bomb”. She put my kennel on the map.
The gamest that I have seen, well it’s hard to say because I have seen a few “Dead Game” dogs and nothing can surpass a “Dead Game” dog. So all those dogs that were “Dead Game” would fall into the same category.
I could draw names of dogs that were great but people would not even know who these dogs were, people who live a reasonable diving distance would not know them simply because they weren’t owned by so called professionals, but they were truly great animals. Good dogs are where you find them, a lot of the success has to do with good management, how you care for and raise them.

Q: WHAT ABOUT ON YOUR YARD TODAY?

The breeding bitches that replaced “Cherry Bomb” and “Red Gal” are “Rice” and “Midge”. They are both too old to have puppies; they are just finishing out their days in the style they deserve. I have some up and comers that I am high on, they are well bred bitches that have proven themselves, I just don’t have enough litters on the ground to tell yet, I have several other dogs being line bred and out-crossed, I don’t have enough of their offspring yet to give an appraisal as to their ability to produce in comparison to “Stonewall”. “Diamond Head”, “Mongo Lloyd” and “Hammer Head” are the integral cogs as a stud team. “Monkey”, “Mamba”, “May Rose”, “Heidi”, “Fontina”, and “Zelda” are my brood bitches.

Q: WHAT STYLE OF BREEDING DO YOU PREFER?

I like to make cold crosses or battle crosses out of two tight strains and take these individuals and breed back to the original strains. The first time I ever made an inbreeding was two years ago, using “Stonewall” over one of his daughters. The reason it has taken me so many years to do this is because I have seen good dogs inbred and the results were just disastrous, so I am not that high on inbreeding, but it does seem to work with some individuals. Half brother and sister matings are my favorite for linebreeding. The key word, of course, is selectivity.

Q: DURING YOUR YEARS IN THE DOGS, IN YOUR EYES, WHAT CHANGES HAVE TAKEN PLACE? THE GOOD, THE BAD, THE PEOPLE AND THE DOGS.

The competition is more fierce. The yards are larger. There are more people in the game, not only in my country but internationally. The tougher the competition the better the dogs. The negative side is that some people are drawn from a criminal element. They look to the dogs for the wrong reasons. They are not really into it for the dogs; they are into it merely for gambling. They look at a pair of dogs like they look at a pair of dice or a deck of card, a fast way to get rid of easy money.

Q: LASTLY, YOU HAVE SEEN HOW WE OPERATE DOWN HERE, OUR YARDS ARE BASICALLY SMALL, OUR ENTHUSIASM IS HIGH BUT THE COMPETITION IS LIMITEDM WHAT ADVICE WOULD YOU HAVE FOR US IN IMPROVING THE QUALITY OF OUR DOGS AND THE BREED IN GENERAL?

The best advice that I could give anyone would be honest with yourself, you have to take a look at what you have to take a look at what you have and you must be totally honest with yourself. This way you can breed as good a dogs as anyone in the world.
Finally I would like to thank everyone down here. Firstly the old friends I have over here, [names omitted] The ones that I have met since I’ve been here, [names omitted] and everyone I’ve met here has been a pleasure to know, I haven’t had any problems and I didn’t expect any because everyone attends these shows with a common interest being the dogs. The dogs come first, the people are secondary which is the way it should be. I can’t really pick out a certain day or any person or any one dog that stands out in my mind as being the absolute highlight of my trip, for the simple reason that every day has been just fine. I have mixed emotion s about going home. I look forward to seeing my family, my girlfriend Wendy, and my dogs again, but I hate to leave as well.
Having had the opportunity to see a couple great dogs, many fine ones, and striking friendships with my kind of people; A.P.B.T fanciers, bikers, family folks with strong kinship bonds, people and dogs that made an impression on my mind and a place in my heart. At the risk of sounding too corny, I’ll merely say thanks for a memorable experience.