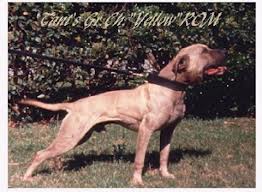 What is your all time favorite dog off of your GR CH YELLOW?

David Tant: Grand Champion RODNEY because he was the best I ever saw off YELLOW. He had it all and plenty of it.

Taipan: YELLOW was bred quite extensively. Are there any special dogs that stand out in your mind as being great off of him?

David Tant: Too many to list them all. That is why YELLOW is the highest Grand Champion on the Register of Merit list.

Taipan: You were fortunate enough to match into that Grand Champion MAY DAY dog back in the 90s. What is your personal judgment about that very popular dog?
David Tant: He is no better than many others off YELLOW. His popularity is because he is highly advertised and promoted by his owner. A lot of hype, you know what I mean.
Taipan: Other well-known dogs off of your yard are AAA and RED DEVIL. What about them and their production record, do you think they will leave a mark in bulldog history?David Tant: No more than many other good dogs off YELLOW. If you are looking for me to hype things up bigger than reality, you will not get that from me.
Unlike a lot of people in the sport, I only tell it like it is and I keep it real. I know everyone thinks that he/she has the best ever but that is only an opinion and everyone has a different opinion.
I guess I am the opposite of the majority, that ad in a lot of hype for their own dogs and run down everyone else’s dogs. I am more modest about mine. You cannot debate what dogs are best. That has to be proven by putting them to the test. Then the historical records state what dogs were best. That is what I say. DAVID TANT SAID THAT.