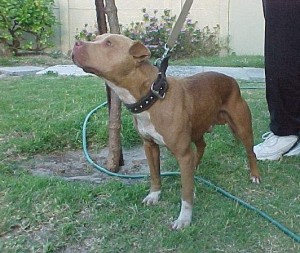 Well, like most dogs that has passed through ones hands each had a permanent place of warmth each time we are reminded or thinking of them, be them with us or not. Yet, another fine such example is Hudson Hawk’s Joey born to Liquorice kid’s Joey and George’s Nicky P.O.R (she deserves this title!!!), as he was the only pup in the litter. As for some background info well, Nicky was a definite candidate for ROM status except for Joey never making Championship status. As Nicky produced ; Swamper Sampson 2xw, CH Diamond Dan, CH Kuzack 3xw 1xGL, Apartheid 1xw , and as stated above Joey2xw…there could well be more winners off her that I do not know of. Ironically, Nicky came short to one her son’s daughter’s , ie Ringo’s daughter Jackie Brown… who’s a natural escape artist! Well, as for Joey’s short life in CT well, he was raised with a couple of other bolio shorty dogs at Hudson Hawks place where he was tested into a very well respected Leg breaker of the old Southener dogs lineage which could be traced back to the import Carver dogs as too from Jurgens imports, very intense thinking dogs which also had the tendency to start late in life, when they did though, they are destructive dogs…but yet again irony intervenes as for “ them “ that had these old line never bothered to hunt, except maybe 3 dogga’s comes to light, a still active Bouncer and Chicago Scott and good ol’ Sandman, who still believes in these dogs. Well, prior to the roll to success, Joe got out of his enclosure and took it to Nighshift (21.5kg)and stood his ground at a mere 10 months(since his hunt weight was only 17.5kg), en boeta he kept coming for more, only problem with these dogs who carried shorty in the gene pool they would take a nip at you and it was damn painful as these buggar’s only wanted action, not that they were people mean at all, well, maybe a few that I won’t bother mentioning. And had the tendency to scream and shriek with fustration, not because they were gonna curr, in noways did this feature ever be in these dogs I have dealt with.

Joe was put thru his paces and as usual like most of Hudson Hawk’s dogs they were tested true and hard…and so it be that Joey first hunt was into a son off Junior Buck, actually double bred son(Jimmy Boots) who was the bellymate to my now King 1xw male. Thru this first time keep for Joey it was hell , as he had more rest days than conditioning day as well, much rested was needed and it did him well, too many injuries was endure in that keep…eventually the Block brothers met up with Hudson Hawk …it wasn’t before Joey’s opponent Jimmy Boots couldn’t cope with a very fast and destructive Joey, and at 40mins or so it was all over, Jimmy boots didn’t make it after that hunt. Almost 2yrs went by and Hudson Hawk was looking for a winner to go into as to avoid further BULLSHITT talk from the local dogga’s as we all know what some men are like taunting and teasing etc… eventually Cape fear arrange for Bobby who was conditioned by 187… well, Joeys keeps always seemed to be nothing from perfect, 1 week precisely from hunt day, myself and Hudson Hawk still blew off some steam as this was the heaviest keep ever put onto a dog, and believe me the few that witnessed it surely called us crazy…hell I think Hudson Hawk did? , maybe he still does…sadly. That’s the Friday evening, after that he got his usual feed, and other goodies. Saturday morning came and this dog who was suppose to be resting had full blown Gastroenteritis. My pup prolly had the germ and his immunity was probably low…is be that I had to call up a good mentor Bismarck Kennels who gave me advise that paid off.

Well, D day came , the boys was weighed in and believe it or not, no forfeit was paid nor money was exchanged, another saga for another day. And they are released… the hunt went tit for tat for the first 10 min, Bobby was not give the day at all to land his destructive mouth, and when tried Joey just pushed hard to keep him on the back foot, our keep played out, cause Joey was recovering way faster and dishing out way more than Bobby could handle from 18 mins on it was all Joey, and Bobby just kept on singing , I as always couldn’t contain myself and predicted 45 min for Joey to win , well they proved me wrong and Joey was a 2xw at 46min…all over…Hudson Hawks Joey 2xw… Now that Joey was a 2xw , everybody wanted a piece of him, I mean , how could a bolio dog that tight be so good, and the hunt was on …Pastor Klein Jaklas 2xw bred by Yellowman kennels, vs Hudson Hawk’s Joey 2xw …date and time was set… D-day came, me and HH had to wait 4hr and more for this crew to rock up, but instead of claiming forfeit, to a very rude bias ref, HH agreed to take on Jaklas…which turned out to be a big mistake, cause we missed the peak hour for Joey, for all the waiting burnt off his reserves and strength…it was one of the most brilliant hunts I ever got to handle, only Joey turned but even the ref Claimed him to be the gamest bolio dog he ever saw , all I said was he must visit CT more often, as he went to the wrong yard lol!!!!but alas, our warrior started to go just for the chest and Mr Jaklas had all the brain power he needed to win(1hr38 min)…I take my hat off to Jaklas, but he too didn’twalk away with his life…Joey & CH Jaklas both passed the next day…both dogs came short to a black mould infection which resembled gangrene but we ain’t still to sure…