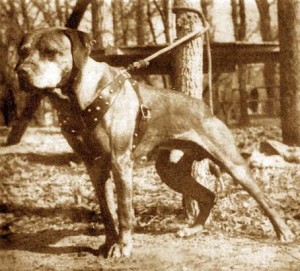 Centipede was whelped about 1933 in the kennels of L. C. Owens in Texas. He was the result

Louisiana. McCoy and Bob Hemphill made the journey down to that part of the country and

bought several dogs. Hemphill kept his close to the vest, but Dan McCoy was always on the

move and couldn’t keep dogs, so he left his with trusted friends, including Arthur Harvey and

to produce the litter which contained Centipede. At the beginning of his career, Centipede may

not have been a unanimous choice for best dog in the country, as his ability was so great that

Centipede was. After his final match Tudor couldn’t get him matched, as everyone conceded

that he was the best. Nothing his weight, or any weight, could beat him. That was the common

opinion among dog men. This was evidenced by the fact that Tudor opened him up at catchweight

with no takers. Frustrated, Tudor sold the dog to Dave Ferguson. Centipede was considered

the greatest pit dog of his time. When someone of those days referred to “the great one,” they

didn’t have to mention the name. Everyone knew that it was Centipede.