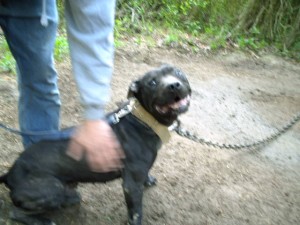 This dog never won a match, but deserves to be mentioned because he was extremely game and his display was a sight to behold, anyone who was there can tell you this.

Barney Fife stated that the gamest dog alive in his opinion was Belfast. Belfast was a 1XL, winning Gamest In Show. This animal is the definition of game and I would feed him in a second! His owner’s seem to be first class people with good intentions. Wanna breed to a very game bulldog, BELFAST is your ticket.

His only match was against Heer-Slap’s Snotty at 48 Ibs. Snotty, a red and white bred from Garner’s yard (mostly Snooty breeding) was conditioned and handled by Beach Boy Billy. Both dogs came in over weight. Belfast starts fast and shows to be very strong and rough as he shakes Snotty all over the pit. Snotty has the harder mouth and is much more experienced only taking ear holds. After :10 minutes, Belfast has lost most of his power and Snotty takes over biting hard in the shoulders and stifles. None of this seems to bother Belfast as he tries to take the offensive at every opportunity. Snotty is in excellent shape and gets farther ahead. One scratch each and Belfast is up for his second scratch. His front end gone, he pitches forward, catchting himself on his face and pushes off, repeating this until he hits Snotty. The audience is stunned by this incredible display of gameness. X-treme immediately picks up Belfast and Snotty makes a courtesy scratch at :52 minutes. Belfast demonstrated desperate gameness winning Gamest In Show at the Mountain Tree House show.

BELFAST THE GAMEST DOG ALIVE….WORDS OF THE LATE BARNEY FIFE!!